What does a new restaurant on the verge of opening do when a pandemic strikes? That has been the question facing Liberty Call Distilling following two years spent planning its newest location, a restaurant-distillery originally slated to open at the start of April in Barrio Logan. 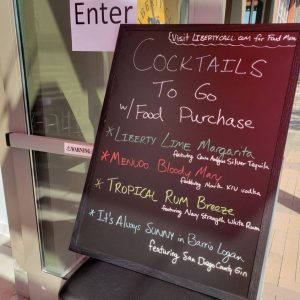 By mid-March, Liberty Call Distilling’s team had finalized every detail; menus were printed, dining tables and décor had been installed and the process of hiring staff was in full swing. This newest addition to the Mercado del Barrio building passed its final health inspection and received the City’s green light to open.

But a few days later California ordered dining rooms closed, creating a wave of restaurants pivoting to increase takeout. After so much time preparing to open its dining room, bar and patio, Liberty Call’s Barrio Logan location found itself doing the same; strangely, the restaurant began serving takeout before having a chance to serve a single dine-in guest.

“We were excited to show off our new venture after eighteen months of construction, but things changed; we changed with it,” said Marc Lord, a longtime Coronado Island resident who has helped create the distillery’s new Barrio Logan tasting room.

Liberty Call’s cocktails to-go range from a crowd-pleasing Liberty Lime Margarita to the gin-based It’s Always Sunny in Barrio Logan, plus a recently added Mint Julep. Each cocktail is sold as a twelve-ounce serving, equating to three cocktails for the price of one; purchasers need only add ice.

During this time, Liberty Call has also continued giving free four-ounce spray bottles of hand sanitizer to anyone stopping by the distillery, as well as selling larger refills.

Once able to fully open—a date that the team looks to with optimism—Liberty Call’s Barrio Logan restaurant will serve a wide-ranging menu of California tapas and craft cocktails in a casual, comfortable space where a glass-enclosed distillery behind the bar will give a glimpse at artisanal gin, rum, bourbon and whiskey being made. At its western side, a garage door-style wall will roll up to reveal a patio with a fire pit and views of Coronado Bridge.

“Assuming all goes to plan, we should be soft opened by the first of June,” said Lord.

Liberty Call Distilling’s Barrio Logan location is currently open Fridays from 3 to 8 p.m. and Saturdays and Sundays from noon to 6 p.m. at 1985 National Avenue, Suite 1131. Learn more at www.libertycall.com and follow @LibertyCallDistilling on Instagram.

Near the beach side of the Hotel del Coronado, construction fences have started to come down.  Here is a snapshot of a new area...
Read more
Business

Village Pizzeria Bayside at the Ferry Landing just got an upgrade! We are now taking online orders. Whether you’re looking to order ahead and...
Read more

By Phil Garn, Advocate for Live Buoy MonitoringMore than twenty members of the public including the colorfully attired Dani Grady and her “Sharkbait Mamas”...
Read more
Community News