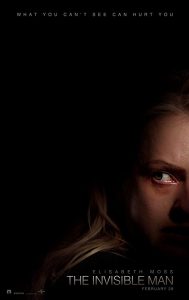 The Invisible Man immediately drops you into the story. Crashing waves and grey skies set the very dark mood. The camera focuses on Cecilia (Elisabeth Moss) as she slowly gets out of bed and retrieves her belongings (minimal clothing, maximum cash). Her husband Adrian (Oliver Jackson-Cohen) remains asleep in their bed. The excruciatingly slow camera following of Cecilia room to room, moving some of the security cameras, disabling others, makes it hard to breath. A shattering kick to a dog bowl against tile floor sends panic, and once more as the blaring car alarm goes off.

Once Cecilia makes it out to the main road, her sister Emily (Harriet Dyer) whisks her away to begin a new life. This new life involves lovable dad James and daughter Sydney. The only two characters that can crack an audience smile during the dark tale. When strange things start happening around Cecilia she is convinced Adrian has found her. Photos of Adrian’s apparent suicide two weeks after Cecilia leaving cast doubt. She believes Adrian, the leading expert on optics, could still be controlling the mysterious and often dangerous events that keep happening. But is it Adrian, or the bottle of pills she doesn’t discuss much, or is fear driving her truly mad?

The creepy camera angles during the film make it feel like someone is watching her. Elisabeth Moss gives an outstanding performance as a woman possibly gone mad. Just when you think you know where the story is going, an unexpected fear-inducing scene is unleashed. The story differs from the original 1933 film whose plot focused around the male lead. The change to a woman escaping an abusive relationship gives a chilling new layer to the film about what it feels like to not be believed.

Greg joined me for this movie as a thriller lover. “I enjoyed the film work at the beginning with the waves crashing on the rocks. I also felt like the film really knew when my mind was straying and dropped in the action right then. The only thing I was annoyed about was it seemed like there were four different endings.”

Check it out for yourself, but don’t walk home alone!

Rating: Rated R for some strong bloody violence, and language.

Fun Fact: Originally was going to be part of the Dark Universe franchise with Johnny Depp starring as the titular character and Ed Solomon writing but changes were made to the Dark Universe to focus on individual storytelling and moving on from the shared universe concept after the box office failure of The Mummy (2017).