Your grassroots feedback is needed TODAY (or by the end of the day Tuesday, February 18) on this topic.

This proposed Plan will restrict how more than 1,000 existing residential units and commercial properties in Coronado can be modified in the future.

The Airport Authority is accepting comments through Feb. 18. At the direction of the City Council, the City is submitting its formal comment letter with specific objections. A copy of the City’s letter is available as part of the Feb. 18, 2020, City Council agenda, starting on page 119.

Send in your own comments to the airport authority at alucpcomments@san.org.

Read the city’s key points regarding the flaws in the report.

Below is a map showing the area in Coronado which would be directly affected. 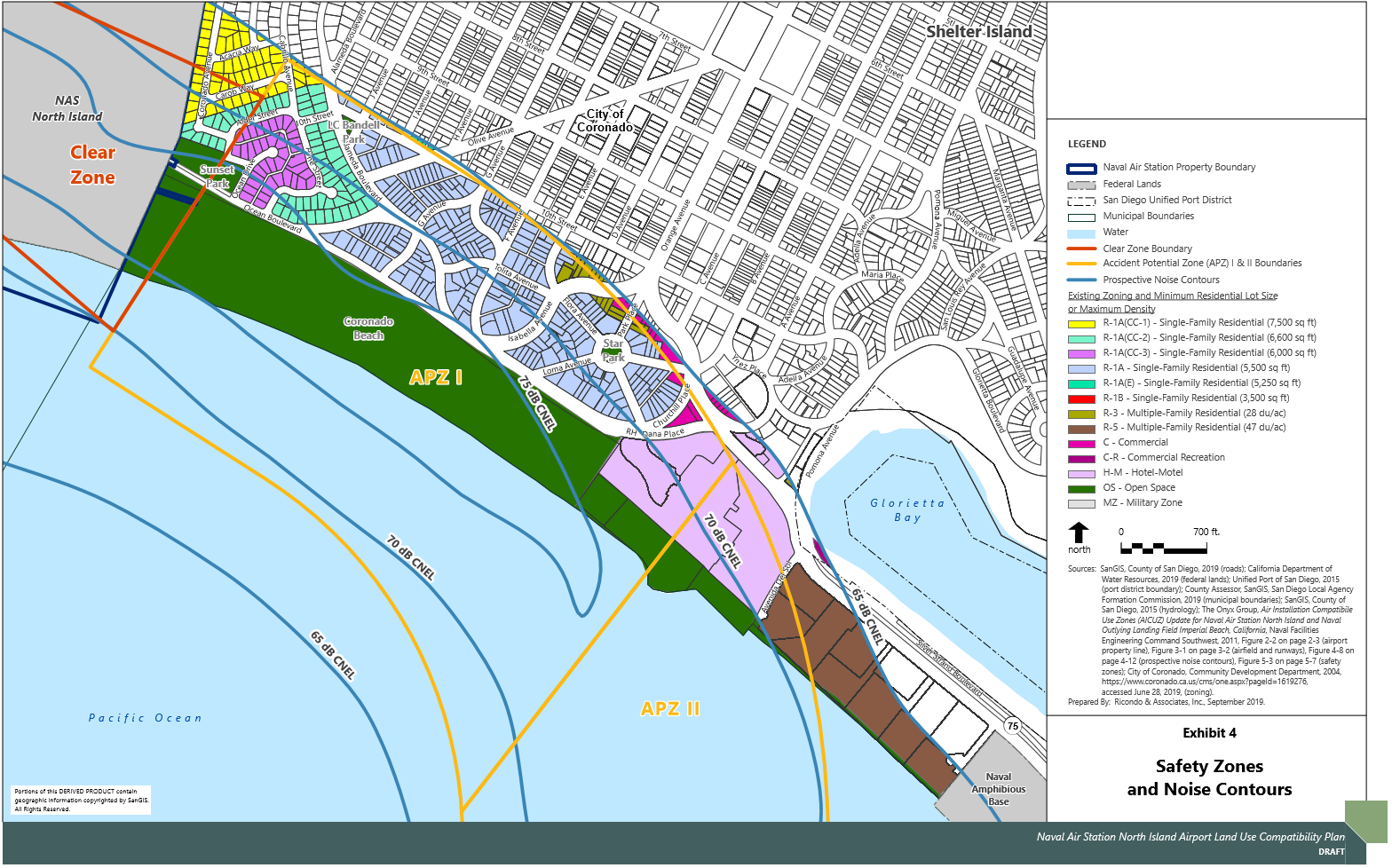 The City of Coronado is asking for the community to voice their objection to the Airport Land Use Compatibility Plan (ALUCP). If adopted, the plan could pose development restrictions on existing residential and commercial units within Coronado which threatens the overall economic health of our community and property rights for approximately 1,000 home owners.

In 1970 the State of California mandated that each county create an Airport Land Use Commission with the authority to adopt ALUCPs. The ALUCP is a guidance document to manage land uses in the vicinity of airports to promote compatibility with operations. By State law, once an ALUCP is adopted, affected local agencies must modify, as applicable, their general/master plan and zoning code to be consistent with the ALUCP

The San Diego County Regional Airport Authority (SDCRAA) is an independent agency charged with managing the day-to-day operations of San Diego International Airport and addressing regional air transportation issues. This board will be deciding whether or not to implement the ALUCP.

The guidelines that the San Diego County Regional Airport Authority (SDCRAA) must follow in preparing the Airport Land Use Compatibility Plan (ALUCP) require that the plan only apply to undeveloped land that is currently not in conflict with the airport. The SDCRAA’s plan is based on the premise that Coronado is encroaching into NASNI. However, Coronado is built out and was incorporated prior to the establishment of NASNI. Coronado has land uses existing decades before North Island was built. Therefore, the premise that Coronado is encroaching into North Island is a misinterpretation by the Airport Authority.

SDCRAA’s limited scope to plan for undeveloped areas with incompatible uses for an airport zone does not apply to Coronado.

We are asking the community to either:

1) Send in your own objection letter to the  airport authority at alucpcomments@san.org

2) Click the following link and add your name to a form letter which will be sent to the airport authority: https://coronadocommunity.wufoo.com/forms/x501gvw1k3trtq/

Comments are due by Feb 18. Please spread the word!

Support PAWS of Coronado and Vote for Our New Canine Mayor!

It's time to get out the vote! Beginning today through April 30, you can vote for your favorite caninedidate(s) and support PAWS' mission to help...
Read more
City of Coronado

Coronado to Close Beach on Weekends and Limit Park Access

At a special meeting on Tuesday, March 31, the Coronado City Council ordered the closure of its beach, including Dog Beach, on weekends, and...
Read more
Community News

Elizabethan theaters were frequently shuttered in London during outbreaks of the plague, so communities were unable to come together and witness performances during times...
Read more

Until a a few months ago I was a Coronado resident for nine years. I have taught music classes at the preschool in town...
Read more
Business

Coronado to Close Beach on Weekends and Limit Park Access

At a special meeting on Tuesday, March 31, the Coronado City Council ordered the closure of its beach, including Dog Beach, on weekends, and...
Read more
Business

The future of revenue for Coronado, specifically monies derived from sales tax and Transient Occupancy Tax (TOT), will undoubtedly be at an unprecedented low...
Read more
Community News

A silver lining is appearing amidst the coronavirus crisis: Coronado residents now have a wonderful opportunity to connect with their neighbors. Thanks to concerned...
Read more
Community News

Quarantined in Coronado: Escape Into a Favorite Classic or New Book

Growing up much of my young life without television made me an avid reader. Trips to the library were my weekly highlight and I...
Read more