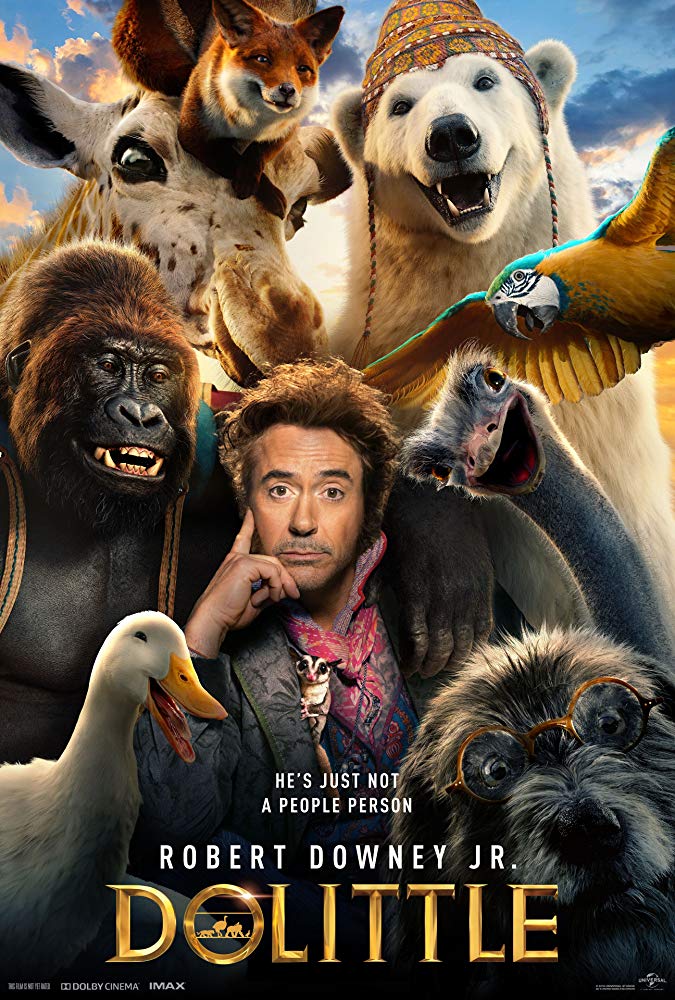 “Days belong to the animals, but the heart belongs to Lilly.” So starts the tale of Dolittle (Robert Downey Jr.), a man who isolated himself after his wife Lilly’s death. Which is a pretty intense beginning if you ask me. However, movies beginning with people dying is sort of how we have accustomed children’s movies for some reason (i.e. Cinderella, Frozen, Beauty and The Beast, to name a few.

While Dolittle is spending his time in a mansion with an array of animals (gorilla, ostrich, dog, goose, giraffe, polar bear), a young boy named Tommy (Harry Collett) is in the woods just outside. Brought on a family hunting trip, Tommy is with his uncle and cousin who are attempting to teach him how to hunt. When he purposefully misses shooting a bird, he accidentally injures a squirrel named Kevin (Craig Robinson). In swoops Poly the Parrot (Emma Thompson) to guide Tommy to Dolittle to save Kevin. I promise that while watching the film it’s easier to distinguish these characters. However it is just as ridiculous as it sounds. Also, Kevin wanders off with Poly the Parrot (what else would a parrot be called?), and no one in his family notices he is missing? The timeline for this movie is shaky, but I’m pretty sure Kevin is missing for days. Home Alone shows better attention to Kevin! 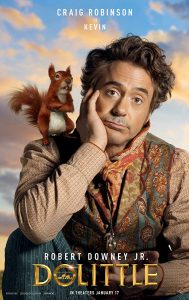 Kevin gets caught in a bear trap and Lady Rose (also a child alone) comes to his rescue. Together they approach Dolittle’s home. Long story medium length… Queen Victoria (Jessie Buckley, the youngest queen in existence) has fallen ill and needs Dolittle’s help. Now Dolittle does not care to help the queen, he just wants to stay with his animal posse. Until Lady Rose informs him that if he does not help, Queen Victoria will die, and then he will no longer be allowed to live in his mansion with all of his animals because the “lifetime” right to live there was the length of the Queen’s life, not his. Add insult to injury and remember that if he was to lose his house now, he would lose it IN HUNTING SEASON. That covers the first 15 minutes, and then the adventure really begins…

All in all, I just really missed Eddie Murphy. This movie is far more fantasy based- queens, pirates, dragons, and from the beginning you knew Dolittle could talk to animals so that was not as thrilling. Moviegoer Sierra (it’s unknown if she ever saw the Eddie Murphy film) shares, “I really liked the movie! The only thing I thought was weird was Robert Downey Jr.’s accent was hard to understand at times. Other than that it was very cute and fun to watch!”

Fun Fact: The film was originally going to be released on May 24, 2019 by Universal Pictures, but was moved to April 12, 2019 to avoid competition with Star Wars: Episode IX – The Rise of Skywalker (2019). It was later pushed back again to January 17, 2020. This concerned many because January is when studios have historically released films they feel will fail. The report that the film went through almost a month of reshoots and rewrites supported this concern.