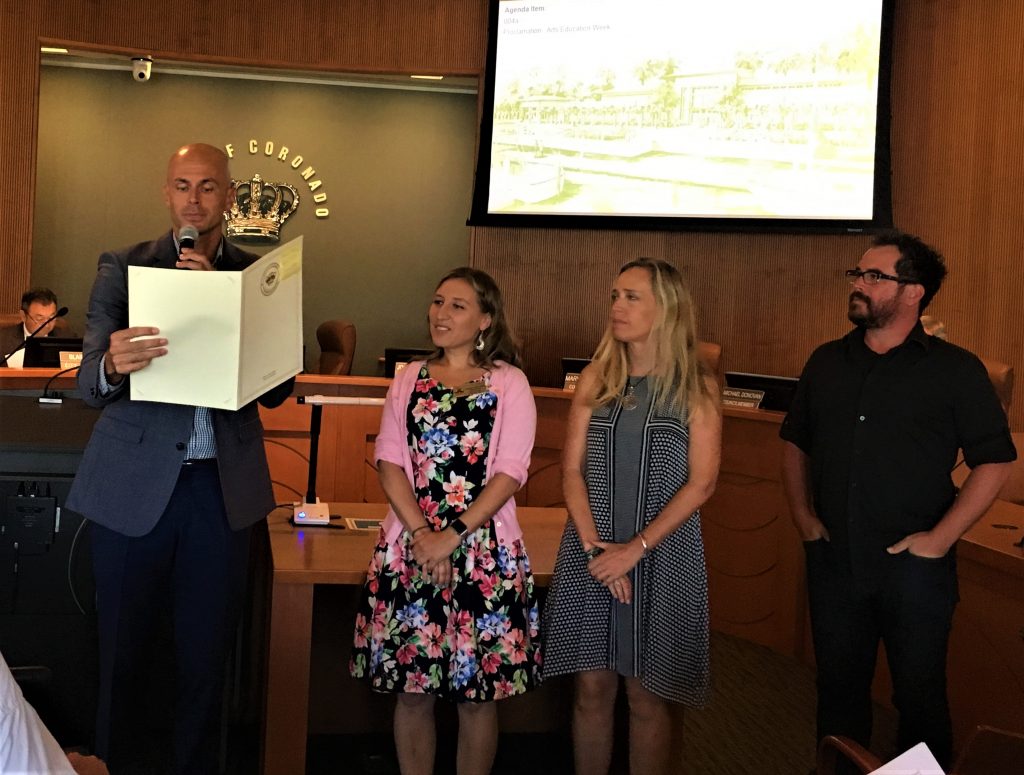 The biggest decision of the council meeting was to engage in negotiations with Caltrans for the relinquishment of State Routes 75 and 282. Cliff Maurer, Director of Public Services and Engineering, gave a detailed presentation on the pros and cons of this relinquishment issue. He cited examples of Venice Blvd. and Whittier Blvd. in the Los Angeles area that have done this. The historical timeline for this project dates back to 2011 when Caltrans expressed interest in divesting State Routes to local governments. In March 2016, the Coronado City Council decided not to be part of AB 2075, which was initiated by Imperial Beach for SR-75 relinquishment. In February 2017, the council directed City Manager Blair King to request Caltrans prepare a relinquishment study for SR 75 and 282. Caltrans delivered the draft Project Initiation Report (PIR) in October 2018. In February/April 2019, the Council directed King to contract for economic impact and engineering studies which have been completed.

He also outlined the potential risks, which include:

City Manager King voiced that the Navy would be kept in the loop through this process. He said that some citizens have expressed concern over liability issues, and he acknowledged that the city would be the principal responsible party after relinquishment. The city is insured through Joint Powers Authority (JPA) through the California State Association of Counties (CSAC), which is a net pool where members share risk. King outlined the three layers: self-insurance for deductibles up to $250,000 per incident; coverage of up to $50,000,000; worst case shock claims result in cost increases of $40,000 annually for up to seven years. He also said that some of the other cities in the insurance pool own similar roads and Coronado has a higher risk than some other cities with their emergency transport and beach lifeguard programs. He mentioned that for the good of the city “I’ve never seen this council say we aren’t going to engage in an activity based on liability.” He noted that even city parks carry potential risks.

When questioned about his opinion on relinquishment, Mauer replied, “I feel confident we can put together a fund for future maintenance to ensure we are cash positive way into the future.” The next step in the relinquishment process is working with Senator Tony Atkins’ office to negotiate with Caltrans. After the city adopts a resolution expressing their desire to assume responsibility, it would then request State Legislators to sponsor a bill. After which, Caltrans would acquire the set monies in their budget and prepare relinquishment maps, agreement, and a CEQA study. Caltrans would then send a Funds Transfer Agreement to the California Transpiration Commission (CTC) and they would vote to approve the relinquishment from state to city. The council voted unanimously to authorize the city to enter negotiations with Caltrans to develop an agreement for the relinquishment of State Routes 75 and 292, within city boundaries, to the City of Coronado.

The last item was one of the most important for the future of Coronado as the council weighed in on the letter that staff drafted to go to SANDAG regarding the Regional Housing Needs Assessment (RHNA). Mayor Bailey pointed out that it seemed unfair for Coronado to be given a 2000 percent increase from ten years ago, which is next to impossible with the constraints of the Navy and airport with only 7.7 square miles in Coronado and only 2.2 square miles in the city’s control. Councilmember Sandke pointed out that Coronado has already done more than its fair share to add housing. There was discussion about the possible small city exemption for cities with 25,000 residents or less, which includes Solana Beach, Del Mar and Coronado in San Diego County. The mayor praised the more than 2000 people who have signed a petition protesting the higher allocation of more than 1,000 units for Coronado. Each councilmember praised the letter and gave input on key points to strengthen and unanimously approved sending the letter with the recommended changes.

Port Commissioner Gary Bonelli spoke up during Oral Communication and said that the next Port Commissioners board meeting will be Monday, September 16 at 1 pm at the Manchester Grand Hyatt, 1 Market Place, San Diego.  The public is encouraged to come to give input. He pointed out that the port listens to what the public says, and this is evidenced in the decision to not have a hotel at Grand Caribe or the Ferry Landing and no cement promenade around Glorietta Bay by the Golf Course.

Tricia Olsen, Associate Planner, Staff Liaison for the Historic Resource Commission (HRC), gave a presentation for the public hearing to appeal the 3 to 1 decision of the HRC to historically designate the residence at 545 Alameda Blvd. She cited that the HRC felt the house met Criterion D for R.A. McMakin, whom some felt was a historically significant figure in aviation who lived there, and also met Criterion D for being a notable work of Southard Electrosteel Structures. The presentation by the Tucker Family Trust representative pointed out major modifications that have been made to the property, questioned the historical significance of R.A. McMakin, and also noted the Electrosteel construction was only found minimally underneath the house. Three additional community members spoke up in favor of overturning the decision. Councilmember Heinze had Brian Tucker, the homeowner, come up to outline what he intended to do with the property. Tucker indicated that he planned to restore the windows and front door back to the original French eclectic style. The Council voted 4 to 1, with Councilmember Donovan dissenting, to overturn the HRC ruling.

Rich Grunow, Director of Community Development, presented a brief update on the new basement construction ordinance and administrative procedures.  When Councilmember Heinze asked if there had been any negative impact with these new measures, he noted that there has only been one new project in the past year. The council unanimously voted to accept the report.

Ed Walton, City Engineer, gave an update on the 4th Street and Alameda Blvd project stating unmarked encased utilities and ground water had been discovered. These unexpected items have caused additional work and the council unanimously approved a $30,000 Change Order. Walton said that the project would be completed within two weeks, if no other obstacles were encountered

An update was given on the San Diego Airport by Mark West, Board Member, and Brandan Reed, Director of Planning and Environmental Affairs, San Diego County Regional Airport Authority. Reed pointed out that the number of passengers increased to 24 million last year with one million of those travelling internationally. The San Diego Airport currently serves 60 domestic destinations and 13 international markets, and those numbers keep increasing. After years of planning, hundreds of meetings and refinements, they plan to release a draft Environmental Impact Report (EIR) in late November 2019 with a 45-day public comment period.  They have also worked closely with NASNI on an Airport Land Use Compatibility Plan (ALUCP). Replacing Terminal One will be the centerpiece of the new plan with anticipated construction on the new terminal beginning in 2021 and opening by 2024 with the first 19 of 38 proposed gates. For details, visit www.san.org/plan and www.san.org/nasni. 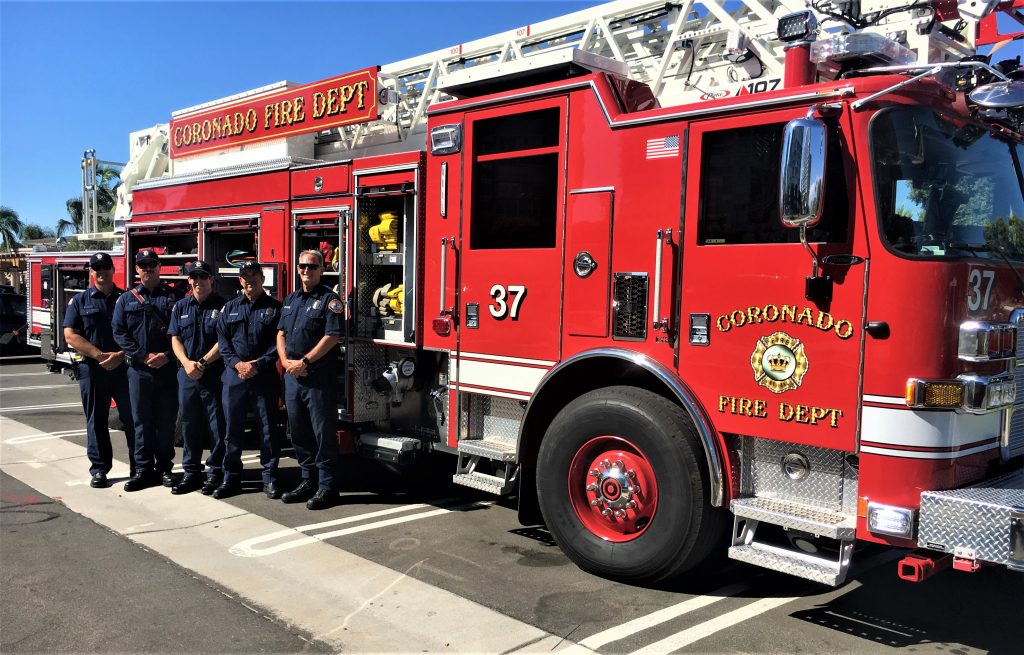 Coronado Firemen were out in force at City Hall at the council meeting showcasing their newest $1.3 million Pierce Arrow XT Quint Ladder Truck which just arrived two weeks ago. Fire Captain Josh Scarboro shared that the new truck has energy efficient systems like LED lighting and is shorter in length, but taller than the 10-year old truck it replaced. “We are benefiting from the newer technology capabilities of the computer command center which allows us to level and balance the truck automatically rather by using sight and gauges,“ he commented.