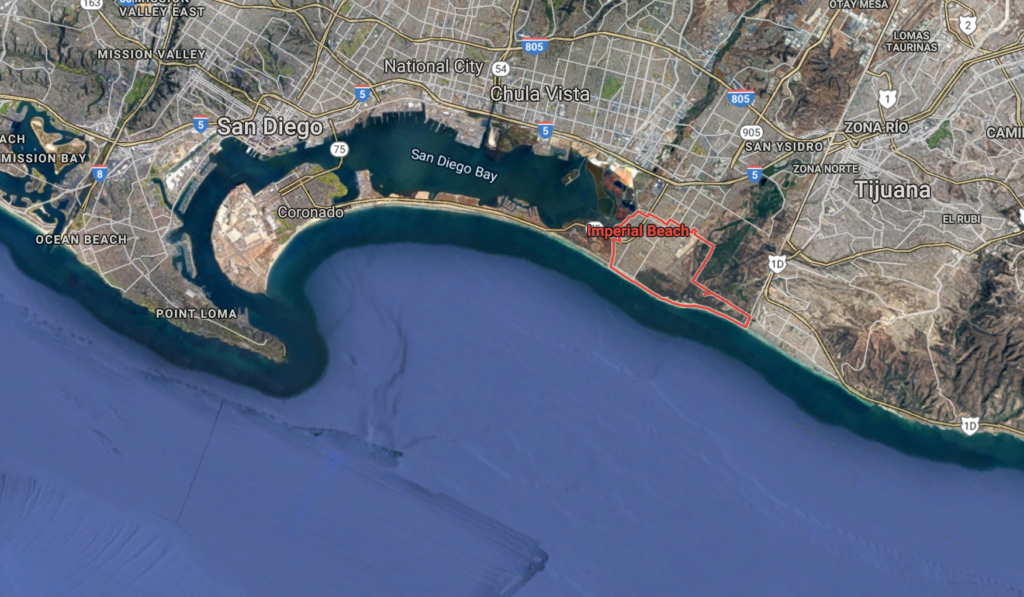 Memorial Day weekend was spoiled by millions of gallons of raw sewage and toxic waste flowing down the Tijuana River, fouling the sands and ocean waters of Imperial Beach, Coronado’s neighboring city just down the Strand. Once again thousands of folks who had planned to enjoy the sand and surf were sadly disappointed. Besides the disappointed surfers and beach goers, retail shops and restaurants along the IB beachfront were financially hurt by yet another of the many toxic cross-border raw sewage flows coming down from Tijuana.

It was all much too much for Imperial Beach Mayor Serge Dedina. In public comments during a KPBS interview, the mayor’s frustrations poured out in angry remarks directed at neighboring Coronado. Mayor Dedina’s remarks that the city of Coronado was not doing enough, not adequately contributing, and should join in Imperial Beach’s lawsuit against the federal government sparked a social media fire storm.

Coronado city leaders and staff were scolded by social media gadflies who do not have all the facts, much less accurate facts. Imperial Beach councilwoman Paloma Aguirre chose Facebook and Twitter to insinuate Coronado was exhibiting a social bias toward Imperial Beach. Why?

Fortunately emotions cooled and wiser actions were pursued. Mayor Richard Bailey and Mayor Serge Dedina did the unthinkable in this age of social media – they spoke with each other. Mayor Bailey called Mayor Dedina and they discussed the situation. After a few conversations, the meeting of experienced mature minds resolved this tense situation to each other’s satisfaction. Below is a letter Imperial Beach Mayor Serge Dedina sent to Coronado Mayor Richard Bailey. Mayor Dedina also forwarded the letter to the The San Diego Union Tribune. It is a privilege to share with our readers how two wise adults can communicate and resolve misunderstandings. 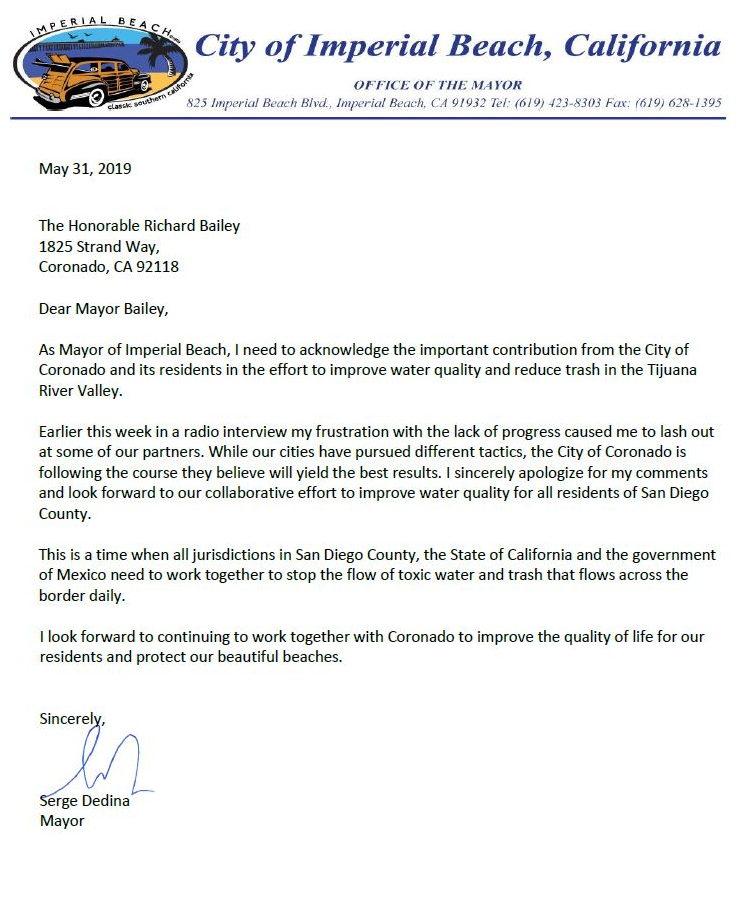 In response, Mayor Bailey said, “The City of Coronado accepts and appreciates Mayor Dedina’s apology. We understand Mayor Dedina was speaking from a place of passion and frustration about a decades-old issue that his community of Imperial Beach has borne the brunt of for too long. Coronado is proud to provide financial support for their preferred legal action and we will continue our diplomatic efforts to secure funding for future border projects. As far as I am concerned, we’re on the same page and looking forward to working together.”

On June 5, 2019, the Tijuana River Valley stakeholders will meet with Federal Agencies’ representatives, including EPA Regional Director Michael Stoker, in the Nautilus Room of the Coronado Community Center. It is gratifying to see that after many decades of nothing tangible being done to correct the toxic sewage and trash flows fouling the TRV, we have leaders who have taken decisive action. We all need to positively support these very pro-active organizations, city, state and federal government representatives in their efforts. Their actions are long over due.

A VA home loan is a $0-down mortgage option that is issued by private lenders and partially backed by the Department of Veterans Affairs...
Read more