“Penguins” Delivers a Cold Landscape that Warms the Heart

A non-animated Disney film? Oh dear. Having accompanied my six-year-old co-reviewer to dozens of children’s movies with flashy animation and singing princesses, I was skeptical as to whether she would make it through a documentary film. Comforted by the film’s running time of just over an hour, I loaded up on treats and hoped for the best.

The verdict? “Two flippers up”—a phrase coined by friends that captured the sentiment shared by all.

Penguins is the story of “Steve,” an Adélie penguin in the Antarctic who joins the annual 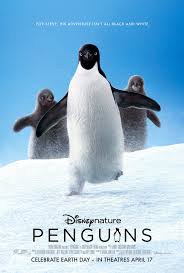 penguin pilgrimage to build a nest, find a mate, and start a family. The breathtaking landscape is a character in and of itself as the audience accompanies Steve across the snow-barren tundra, atop icy summits and under the expansive ocean alongside seals, whales, and other wildlife which become all the more spectacular on the big screen.

Early in the film (*spoiler alert*) Steve meets a partner in Adeline and the story follows as the duo toils to ensure the safety of their chicks so the penguin circle of life may endure.

Through Steve and Adeline’s journey, Penguins manages to find the perfect balance between entertainment and education. Although guaranteed a happy ending (it is Disney, after all), there were some scary moments made all the scarier because the depictions were real. Likewise, nature-can-be-stranger-than-fiction examples including the practice of penguins regurgitating their food to feed their chicks amused my co-reviewer to no end:

“The penguin barf was my favorite part,” my co-reviewer reported gleefully, “I think kids will like it ‘cause it’s gross.”

The only aspect of the film that left me cold was the soundtrack. Despite the film’s original music composed by Golden Globe nominee Harry Gregson-Williams (The Chronicles of Narnia, The Martian, Shrek), some poorly-placed Whitesnake and REO Speedwagon conjured memories of grade-school science class and dusty VCR screenings of National Geographic movies.

Still, what the film lacks in contemporary music, it makes up for in social consciousness. For each ticket sold in the U.S. and Canada during the film’s opening week (April 17, 2019 – April 23, 2019), Disneynature will contribute $.20 per ticket to the Wildlife Conservation Network to support penguin conservation. Penguins follows other Disneynature documentary films Bears and Chimpanzees, and purposefully scheduled its release to coincide with Earth Day on April 22nd.

Disney once again delivers storytelling magic with the film Penguins. Audiences are delighted watching ice melt and penguins barf. A heartwarming cinematic adventure for all.