Rotary Float Honored as it Highlights Service and Community Spirit 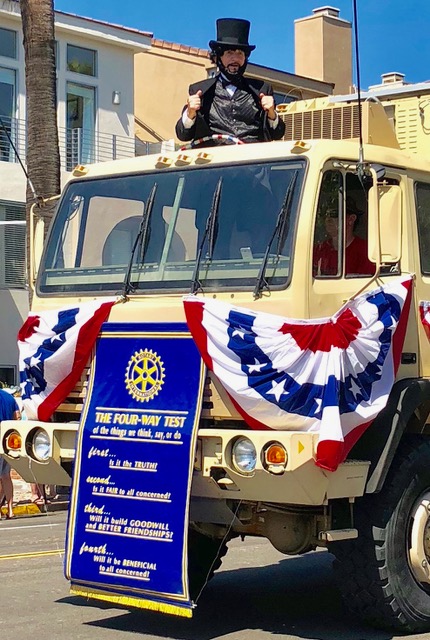 2018 Coronado Rotary President Ivan Dunn gives a thumbs up to all the volunteers who put “Service Above Self,” and inspire others to make a difference.

Here’s to a year ahead filled with service and community spirit!

The Rotary float also represents Rotary’s major fundraisers in colorful banners that proudly display its 92 years of “Service above Self” to the Coronado, San Diego, military, and international communities. Volunteer community service projects such as Beach Cleanup, the annual Pancake Breakfast, Low Tide Ride & Stride, Golf Tournament, and Flags on the Avenue (189 flags placed along Orange Avenue for patriotic and national holidays) are highlighted with club members in costumes, banners, and announcements along the parade route. Dr. John Pedrotty, Rotary’s Fourth of July Committee Chair, was ably assisted by Vice-Chair Bob Rutherford and a very enthusiastic group of Rotarians as they celebrated Rotary and the Fourth of July.

“I joined the Rotary to volunteer my services to the community and people in need through community leadership,” said Ivan Dunn, Rotary president. Ivan invites those who would like to learn more about the Coronado Rotary to join him for a luncheon meeting at the Hotel Del. Contact Jaimie Centeno, Executive Director at coronadorotary@sbcglobal.net.

Local Voices: Experiences, Perspective, and the Need for Dialogue in Coronado (video)

A Coronado mother shares the struggles of raising her daughters in Coronado and the need to talk openly to our children, beginning at an...
Read more
Military

Today, Coronado Police Chief Chuck Kaye speaks out to condemn the death of George Floyd, share how it has affected the community from a...
Read more
People

Using art, Coronado students came together today in a show of unity, doing their part to get the word out, be part of the...
Read more
Obituaries

“Donald Dill, Just A Small-Town Doc” Never has one person had such a profound effect on Coronado as the late Dr. Donald Dill. This small-town...
Read more

Changing lives for the better is a worthy goal for all of us. Coronado resident David Lynch has changed generations of lives for the...
Read more
People

It was a special day for Coronado Rotarians, a chance to celebrate an organization of 1.2 million individuals and 35,000 clubs around the globe.We...
Read more
People

Coronado High School and CoSA students in grades 9 through 12 and high school students who live in Coronado are invited to enter the...
Read more
People

A huge sleigh full of toys was collected by Rotarians and their family members at the 2019 Annual Rotary Christmas Party at the Hotel...
Read more
People

Coronado high school students in grades 9 through 12 are invited to participate in the 2020 Coronado Rotary Music Scholarship Competition. This is an opportunity...
Read more
Advertisement
Advertise Here (Get Rates)