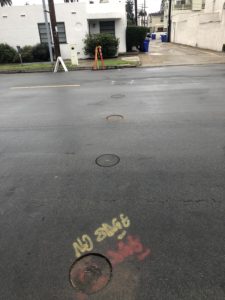 Recent construction on Coronado streets near Orange Ave has people wondering what the evenly spaced circles in the roadways are all about.

Mayor Richard Bailey explained that due to recent attacks on large public gatherings around the country and world, the city is installing bollards for the purpose of enhanced safety during large community events such as the 4th of July Parade. The city believes the bollards are necessary to ensure the public’s safety at these type of events. Essentially the bollards will prevent access to Orange Ave, which is closed off to traffic during these events.

The Coronado City Manager shared in his Weekly Update on May 25, 2018, the following statement:

Special Events Security Bollards:  The City purchased steel security bollards that can be used to cordon off areas for special events such as the Fourth of July parade route. To facilitate the temporary installation of these bollards for special events, small base plates and foundations are being installed across numerous streets throughout the City. Please use caution when driving through the construction zones. All work is expected to be completed by mid-June. Security experts have recommended “hard” barricades as a best practice for large public gatherings.

Mayor Bailey explained that the city allocated $140,000 for the entire project. Approximately $160 per bollard (345 units total) and $140 per base (605 bases total). He stated that “funding for the project is coming directly from the city.”

There will not be any way to access Orange Ave by vehicle during large events with the bollards in place and they are said to be a more effective and safe means for traffic control than cones. The bollards will also be used during Halloween on Margarita Avenue for the protection of families and children in that very popular trick or treating area.

The neighbors in the areas where the bollards are being installed were notified about the street construction prior to the start of installation work, and the project was on the city council agenda several months ago.*