A wooden church directory sign in Spreckels park is at the center of a heated discussion here in Coronado.  It was initially posted within a few Facebook groups (including Coronado Electorate and Coronado Happenings) and came as a surprise to many group members.

Many were not pleased to learn about the sign’s removal, which has been a mainstay of sorts in Spreckels Park for decades.

The sign, as seen below, is a wooden sign listing the names of Christian and Catholic-based places of worship. 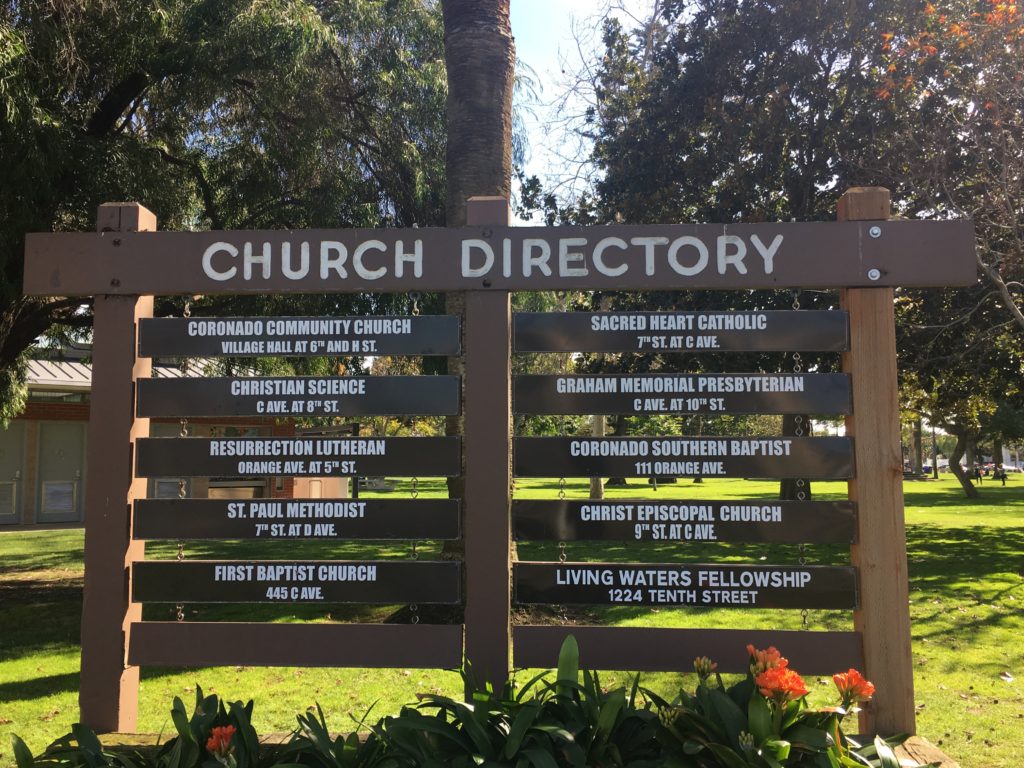 Numerous people had made inquiry phone calls to the City Manager’s office, the Recreation Department, City Hall, and some “tagged” Mayor Richard Bailey on the Facebook post seeking an explanation.

Today, Mayor Bailey did release the following statement to The Coronado Times and also on his official Facebook page.  Note that his statement includes two different signs (the “organizations” sign at Third Ave and Orange Ave, as well as the “church directory” sign at 6th St. and Orange Ave):

“To head off potential First Amendment legal challenges, and in the interest of the efficient use of public resources, the City is in the process of updating the directory signs on Third and Orange Avenue and at Sixth and Orange Avenue. The City will remove the sign at Sixth and Orange Avenue in Spreckels Park as a part of the project. The Coronado Council of Churches is aware this is occurring, and they support the City’s efforts. This redesign will ensure our signage is informative and representative by incorporating our community’s civic, social, faith-based and philanthropic organizations. I understand this is a sensitive topic, however, a new directory/signage will be reinstalled after this project is complete and it will be inclusive of all organizations, including our faith-based ones.”

“It has come to my attention the City will be removing this church directory from Spreckels Park on the down-low this Friday without any public notice or feedback. This directory has been at Spreckels for as long as I can remember and may have some local significance, historical or otherwise. Have local churches been notified? Your thoughts?”

Of the over 350 comments, the majority of respondents were in support of keeping the sign and completely dumbfounded as to why it would be removed. Mr. Case shared that he had a source for the information but “keeps his sources confidential.”

On Facebook, there were comments speculating a conflict of “church and state,” others that it was exclusionary of other religions and suggesting updates, and some people supporting its removal.

So, yes, based upon Mayor Bailey’s comment above, the Church Directory sign in Spreckels at 6th and Orange will be removed. As to what prompted this decision, we are still investigating. A removal date has not been confirmed.

This is a developing story.

I’ve always loved this quote from Mr. Rogers. “When I was a boy and I would see scary things in the news, my mother...
Read more