The 5th Annual Night at the Library: BOOK ALIVE! is in the Books

An evening of art, literature, food, libations, friends and success is in the books for the fifth year in a row hosted by Friends of the Coronado Public Library. FOL (Friends of the Library) was established in 1970 as a way to raise funds which support programs and activities for children and adults through the library.

A variety of mediums from local artists paired with complementary literary works from the library proves to be an interesting and unique night of fundraising. The concept came forth as a result of the board member, Brenda Jo Robyns’ attendance of Art Alive at the San Diego Museum of Art three years ago. Friends of the Library, board president, Marsi Steirer, shared there were about 150 people in attendance and called the evening a success.

There were 17 local artists whose work was featured, ranging from porcelain and silk art to oils and photography, with other mediums in between. 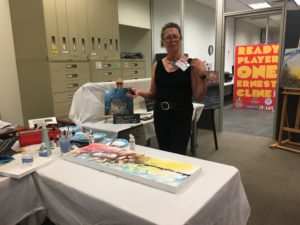 The concept of the evening was to pair a piece of art with a literary work which served as an inspiration for the artist’s piece. Tina Christiansen, who has a newly released book “Interpreting Cultural and Natural Heritage” delighted onlookers with a watercolor painting demonstration. 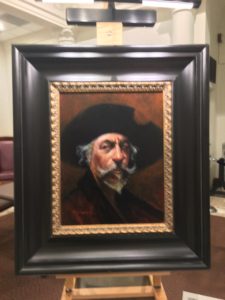 Several of the artists exhibiting generously donated their works for the silent auction, including the acrylic “Miguel de Cervantes Don Quixote” by Phil Martin which was partnered with the classic “Don Quixote”.

I was particularly struck by an oil painting and its artist, Bette Sherman. When asked about the stunning piece, “African Youth,” paired with the book ,“Who Fears Death” by Nnedi Okorafor, she shared that she had painted several pieces from the October 2016 Smithsonian Magazine. She was particularly intrigued by the photo shown here, taken by Christopher Wilson, from which she was inspired. She told me what she found interesting was that this young man, a Maasai youth, was in his traditional tribal attire and had earbuds in his ears, or so it appears. Learning that Bette only began taking painting lessons five years ago at the age of 83 and producing paintings only three years ago was nearly unbelievable. She shared that she has been an artist for many years starting with floral arranging, then enameling and jewelry. She was wearing one of her pieces of exquisite necklaces. 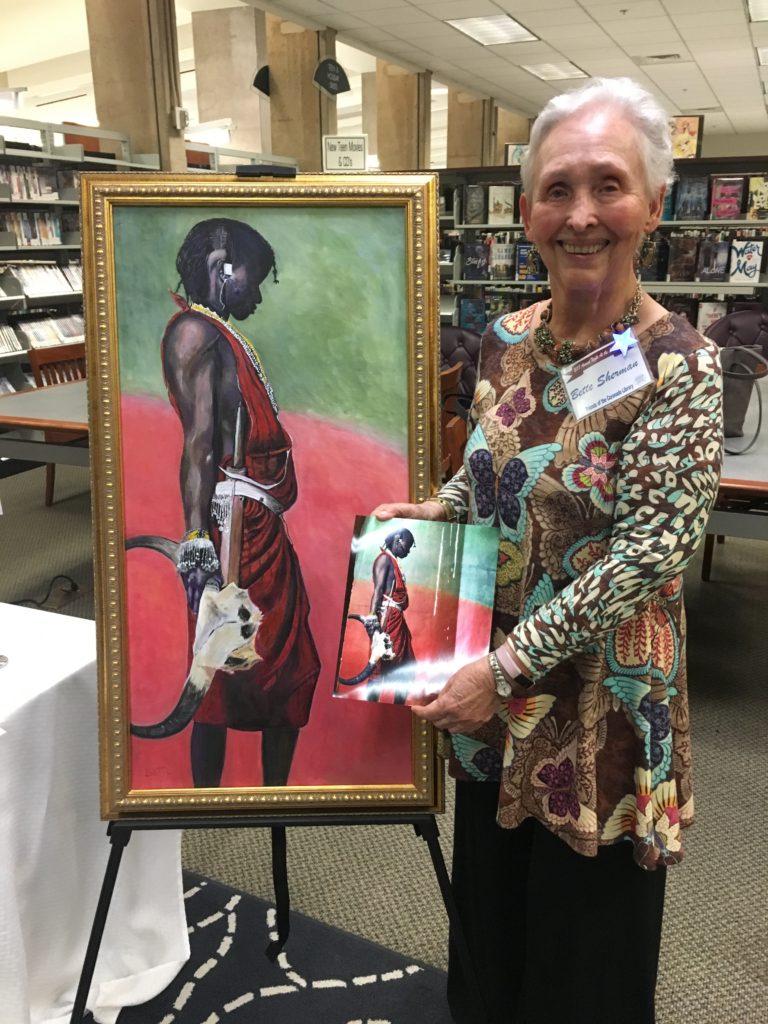 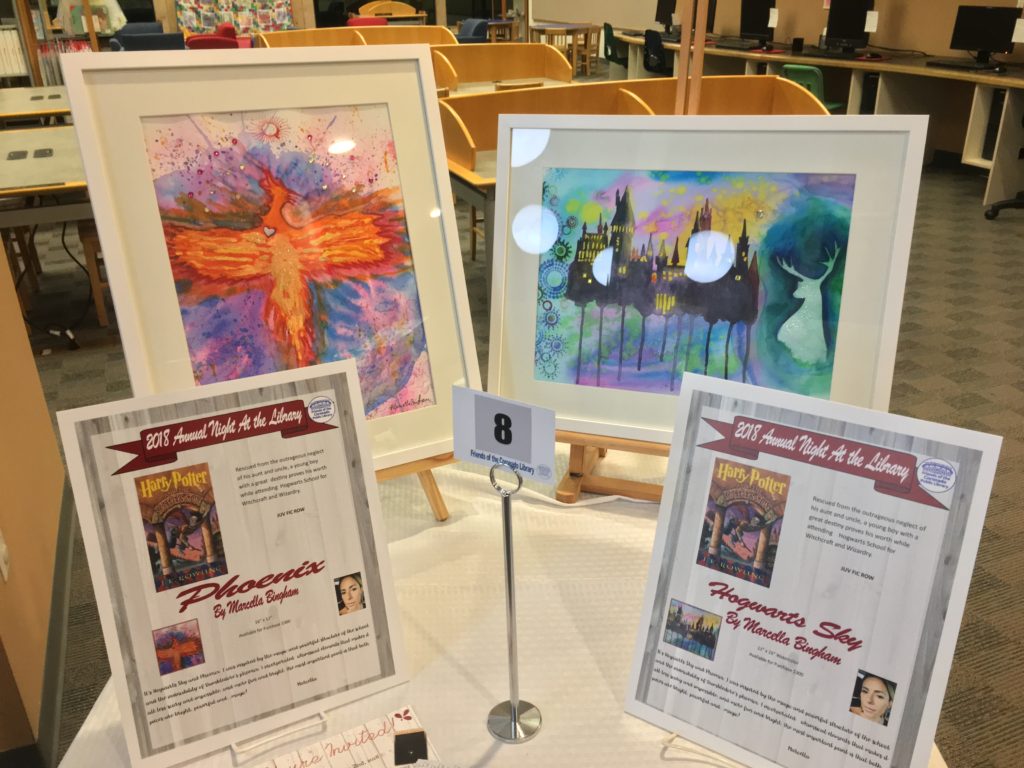 In addition to the works of art, the guests participated in a silent auction of thirty-one items including Coronado Playhouse tickets, a three strand pearl necklace from the d’Forsythe collection, a box of Jeremy Jack Corona Gorda cigars from Crown City Cigars, as well as restaurant, hotel and gym certificates. Truly something for everyone was to up for bidding. An open bar was provided by Coronado Brewing Company and food by Taste of Oils and Smokin’Aces BBQ was available along with dessert from Gelato Paradiso. 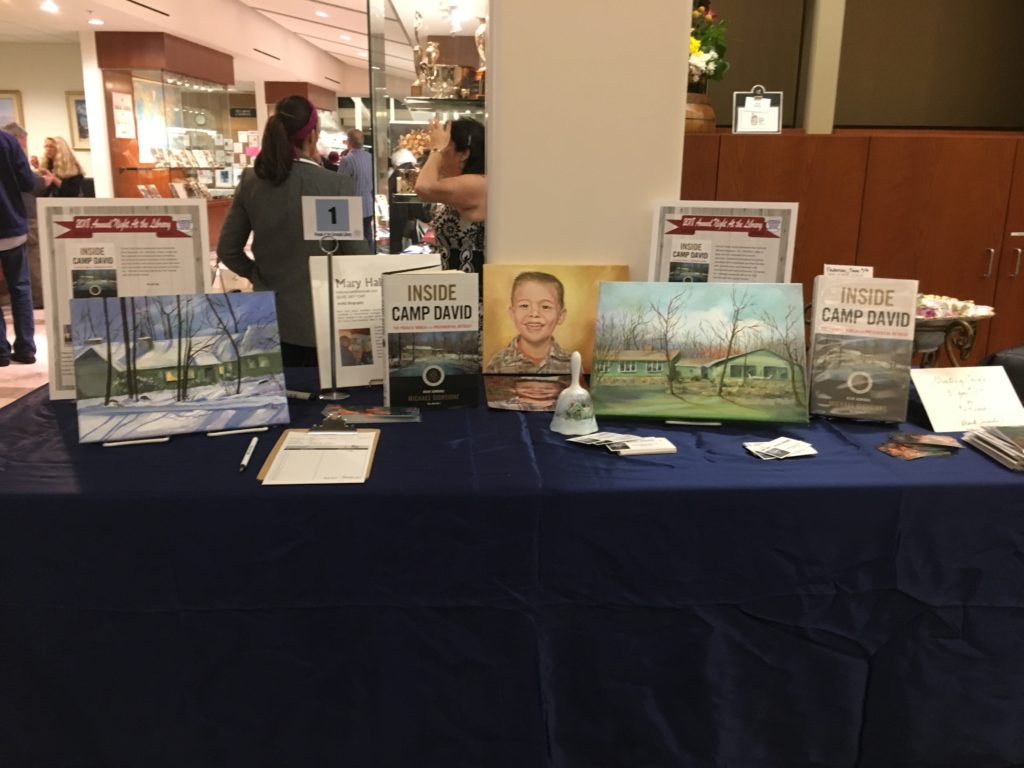 In addition to this annual fundraiser, Friends of the Library also sponsor another big fundraiser coming up April 20-22, their annual book fair which is held at Spreckels Park in conjunction with the annual Flower Show. If you are looking for ways to volunteer or help raise funds for the numerous programs offered through the library because of Friends of the Library, you can shop at Second Hand Prose bookstore located at the back side of the library near the tennis courts or the Little Free Library inside the library near the copy machine. Or perhaps you wish to volunteer or become a board member. Help is always welcome as are donations. For more information, you can email: [email protected] or visit their website www.coronadoFOL.org.