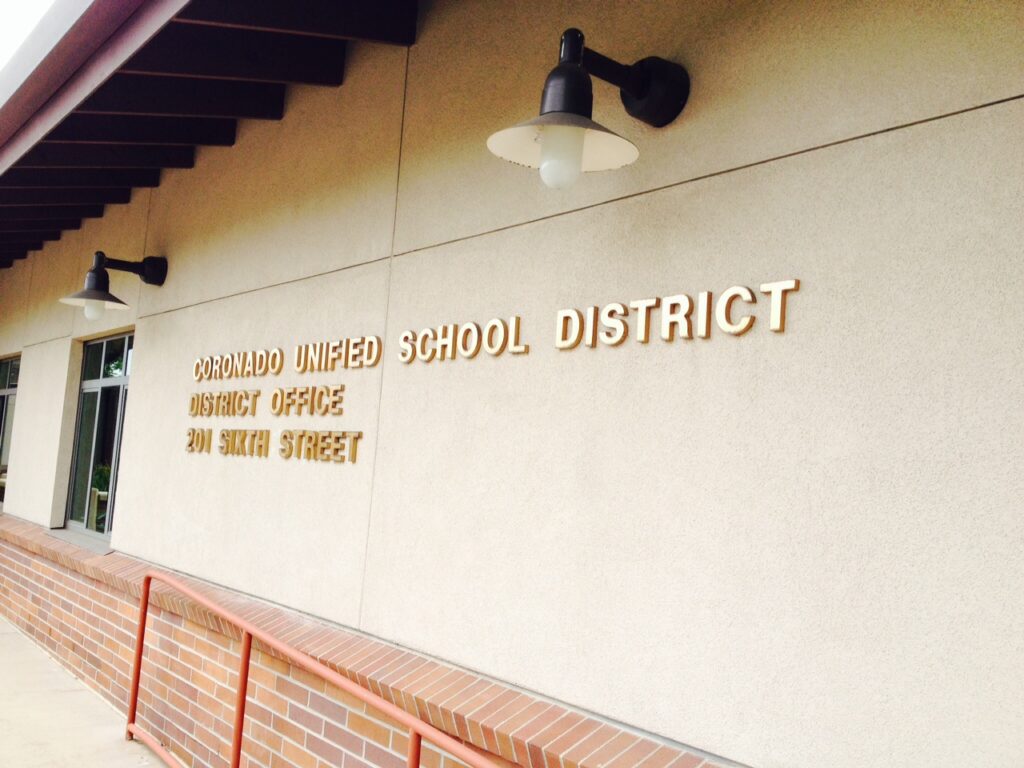 As the new school year starts, here’s a primer on how the City of Coronado and Coronado Unified School District work creatively and proactively to offer the best for our students despite limits on funding from the State.

Sources of school funding in Coronado are as follows: Local revenue is only about 19%, Federal is 5%, and the remaining 76% is provided from the State.

It is assumed by many people that CUSD, given the high property taxes residents pay, should be awash in money.

This is not actually the case.

The 2013 California Local Control Funding Formula law and the state court’s decision to not let Coronado take steps to return to Basic Aid Status before 2036, explain why CUSD spending per student is not higher.

A law signed in 2013 caused CUSD to receive less state money than most other school districts in California. This law was the Local Control Funding Formula (LCFF) Law

However, this law does allow California cities to have more local control over local tax funding of their school distrists.

These wealthy communities, that do not receive additional state money, but can exceed the state level of spending, are considered to be of “Basic Aid” status.

CUSD is not currently a Basic Aid District. It would be better if we were. Basic Aid status does limit the amount of state aid CUSD receives, but Basic Aid status would allow CUSD to use local property taxes to their full extent and allow more local control on how that funding is allocated.

Basic Aid status would have provided a significant increase in available dollars to dedicate to student achievement across the board. For example, money could fund academic programs, some personnel, infrastructure. Some of the funds may have been directed toward a reserve fund.

The reason we are not a Basic Aid school is explained later in this article.

2. The law significantly changed how the state of California funds its K-12 schools.

While most residents probably appreciate that local school districts got more local control on how funds will be spent, there was a significant change in California state funding that hurt CUSD. With the LCFF law, districts receive 20% more money for each high-needs student, based on counts of low-income, English learner, and foster youth students, and even more for schools with large concentrations of these populations.

Historically, Coronado has only a few students in these categories, so the school district is significantly less eligible for that 20% more money for each student in those demographics than other San Diego County school districts.

As CUSD Board member Lee Pontus pointed out via email: “[D]ue to demographics, [CUSD is] in the lowest 8% of districts when it comes to LCFF funding…. Yet we continue to provide superior programs despite that fact, in great part to parental support, CSF, grant money and other funding streams.”

Negative impacts that may be incurred are that needed maintenance on school buildings will be deferred and high quality programs, that Coronado parents expect, will be more limited than if CUSD could have returned to a Basic Aid status.

In the 1980s, CUSD chose to give up Basic Aid status. That decision was made so that the city could use a California state program that provided state funds for City Redevelopment.

Notably, the Coronado Redevelopment Agency was structured to only use tax increments that would otherwise have gone to the City or School District, which is why redevelopment funds were used for school buildings.

The State Redevelopment Program allowed cities to place any natural increases in property taxes over time in a Redevelopment Fund to improve blighted areas.

The 2014, CUSD publication “State Funding in Coronado” explains:  “The Coronado community has benefited from the late 1980s’ redevelopment agency law… This has given us the beautiful facilities that we see today. However, redevelopment funding utilizes that portion of local property tax revenue that would have otherwise gone into the basic aid formula.”

After the school buildings, redevelopment funds were used to improve the Village Theatre, the Community Center on Strand Way, and more.  For a detailed explanation of these projects see the City’s Web page on Redevelopment Projects.

Essentially, taking advantage of the state redevelopment program was an excellent way to improve school buildings and other city facilities and was worth setting aside Basic Aid Status. This was a decision made by the school district to invest in buildings at the time versus using the funds for other things via Basic Aid such as salaries and services.

For a deeper understanding of these issues see these two 2014 CUSD documents:

With the termination of the Redevelopment Agency, the usual amount of property tax revenue should go back to CUSD (as the city could no longer use state money for redevelopment,) and, in theory, CUSD would become a “Basic Aid” school district once again (meaning the school district would get less state aid, but more funds from our local property taxes.”)

But this did not happen.

A second, but unsuccessful, lawsuit by the City of Coronado sought early repayment of the $32.8 million after the State Department of Finance refused to allow it despite early repayment being a condition of the initial loan. Early repayment would have saved millions in interest and the loans, plus the former Redevelopment Agency’s bonded debt could have been paid off early. If the loans were repaid earlier, the School District could obtain Basic Aid status earlier.

CUSD sued to allow the city to pay off the loans and bonds.  After that, the district could become a Basic Aid district.

To that end, CUSD filed suit against the State of California’s Department of Finance (DOF). CUSD’s Director of Finance, Donnie Salamanca, explained: “Because the district is the only taxing entity involved in the City’s Redevelopment Agency, the district was named as the Real Party in the case.”

It is important to note that the City of Coronado proactively used the redevelopment fund program to benefit Coronado students and their families in a way that no other city had done before.

The court rejected the school district’s argument that the funds should be returned at a faster rate, so it will take until 2036 for CUSD to become a Basic Aid District again.

In summary, the Coronado school district receives less money than residents might expect due to changes to the funding of California school districts as brought about by the Local Control Funding Formula Law of 2013. Despite these financial realities, CUSD provides an extremely high-quality education with a passion and a commitment to the young people in their trust and the City of Coronado makes supporting the CUSD one of their top priorities.

Coronado High School will change its bell schedule in the fall. After a contentious board meeting last month, the once-unanimous plan to shift from...
Read more

Annie Buckley, who plays Denise Sanders in the current Lamb's Players Theatre production, Smoke on Mountain, is a senior at Coronado School of the Arts...
Read more
Business

Sadness rang through part of the Coronado community when the "Closed for Business" signs appeared at the sole laundromat in Coronado. The laundromat had...
Read more
Advertisement
Sponsored Partner Links