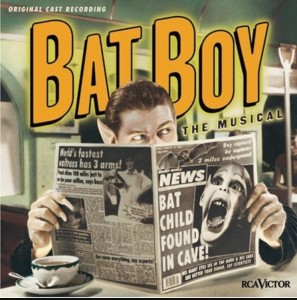 If Bat Boy: The Musical could be summed up in one word, it would be “unusual”. The play is not for the light hearted or theatregoers who prefer “traditional” story lines. Bat Boy is complex, intense, mysterious, and a bit thrilling. However, the production also features humor, a lot of love and a plot that will leave you questioning your own judgments by the end of the second act.

Bat Boy begins on a dark set and within the first sixty seconds you are captivated, your eyes following the helmet headlights and immediate action scene. Throughout the play you get to know the characters; some you like, others you love, and a fair number that you despise. Shelley, played by Annie Buckley, is a perfect stereotypical young teen. She is defiant, constantly going through mood swings, unsure of herself, but still has a huge heart. Meredith, played by Annabell Walker, is believable in her role as caring mom but disconnected wife. Even though she is a high school senior, Annabell could easily be mistaken for a grown woman balancing an array of complicated emotions after years of disengagement. The titular character, played by Matt Morris, is a self-proclaimed genius (though his comments may be in jest). Even though he is all laughs in a crowd, behind the scenes he is the most intense character of all. With all of these emotions, and more, well portrayed by a capable cast, Bat Boy is the equivalent to an emotional fireworks show.

Annabelle explains that emotion is such a huge part of the show; “ I love the complexity of all of the characters, because in a lot of musicals you are introduced to a character but they don’t seem to develop. Every single character [in Bat Boy] has so many emotions that are expressed in that hour and a half.”

Of course, there is a lot that goes into live theatre beyond the actors on stage. The costuming, lighting, sound, and directing are all equally important to the production. For this show, too, those elements were vital to developing the characters. Annie Buckley explains that “in the script, the director wrote that the show had to be set to its truest amount. It is a very interesting play and it sometimes isn’t believable, we had to act it to our best ability to make it feel true to our audience.”

One aspect of the show that is completely undeniable is the family-like chemistry between Bat Boy, Shelley, Meredith, and Dr. Parker. While the cast does a seamless job of making this feel like it is a real family, some of it may be more than acting. Christian Duarte, Walker, Morris, and more of the cast are all current CHS seniors and have come up through the CoSA program together; Bat Boy marks their seventh show together. As Morris laughingly points out, it is as easy to imagine the laughter and joy that fills up the set behind the scenes as it is to see the cast’s passion for acting during the performance. 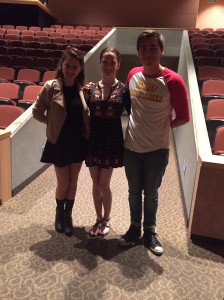 Julia Nardi-Loving, who graduated from the CoSA Musical Theater department in 2010 then went on PCPA-Pacific Conservatory Theatre, was very impressed by the performance. She examines the play, noting of the cast that “they were energized, fun to watch and they have great vocals.” She also complemented the department of their clever art design.

Annabelle urges those who have not yet seen the show to come check out this weekend’s performances. “[The show] is very interesting. It is very confusing. If you let the play unfold, it comes together to make a very beautiful story.” Matt says for the second weekend of shows he is most excited “to see the audience’s reactions. The audience can take one part as serious and another part as humorous, where a second audience can see the situations completely reversed. We are just doing what the writers are instructing us to do: play the script to its truest form. The audience gets to decide how they feel about it.”

Auditions began in August for Bat Boy and the cast and crew has been working hard for nearly two months to stage this challenging show. After talking to these students and actors, I truly believe that Shane Schmeichel (Coronado’s Vice Principal and Director of CoSA) summed it up best by saying that “talent and dedication are the name of the game.” Bring an open mind and strap yourself in this weekend as you take yourself on the wild ride that is Bat Boy: The Musical.