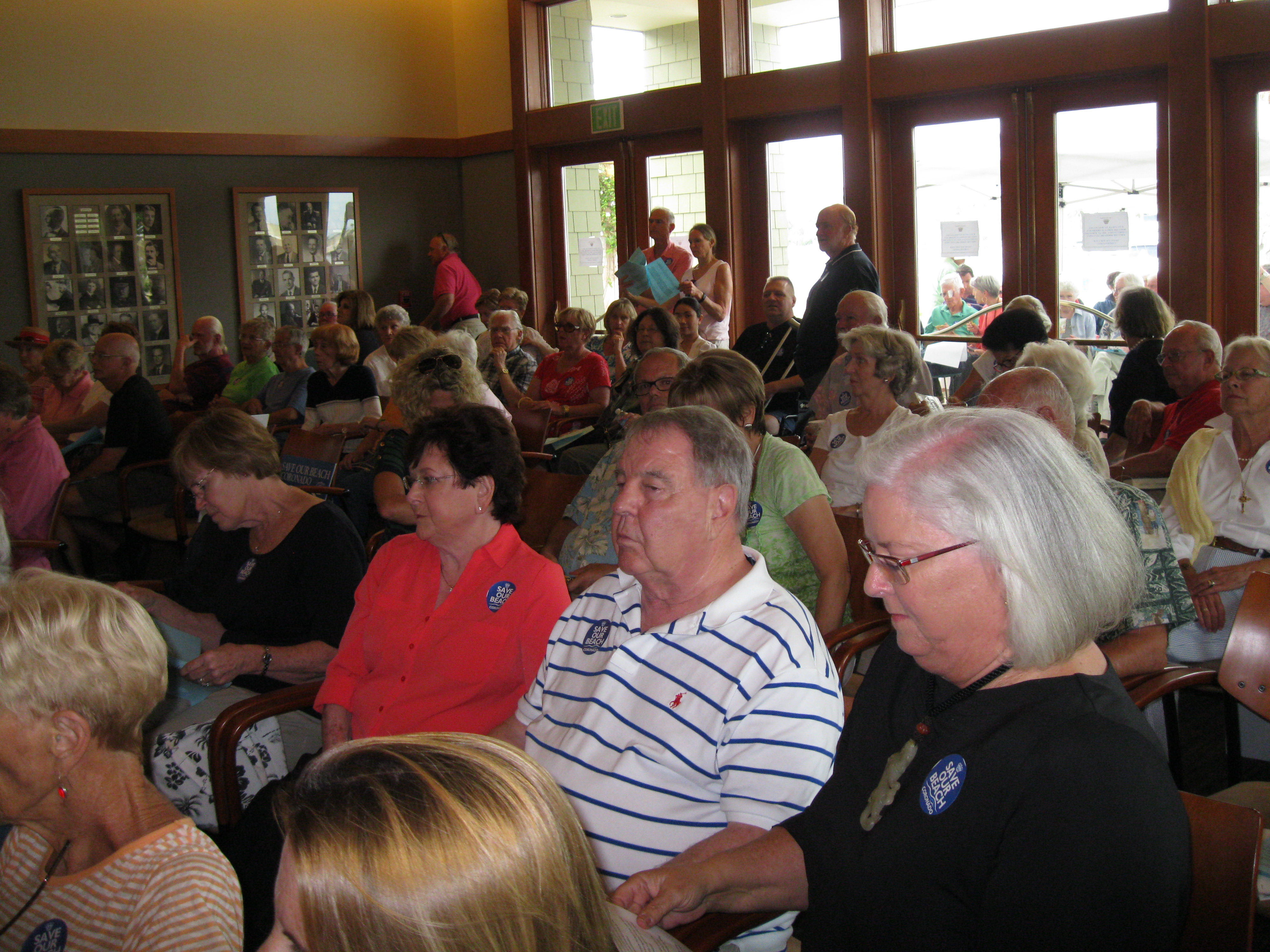 For the second time in less than a month residents crowded the city council chamber to voice their opposition to a feasibility study for a multi-use path on Ocean Blvd.

The council voted unanimously to rescind the $100,000 they had approved in June. They did so in the face of overwhelming public opposition to the study. There were over 200 people, including 100 sitting outside in chairs the city had setup for them. The vast majority wore “Save Our Beach” stickers.

Even before the meeting began the dozens of people sent e-mails to the council and well over 600 people signed a petition asking the council to stop the study. People supporting the bike path also circulated a petition that just under 200 people had signed.

25 people stepped up to the microphone to denounce the idea outright. Only two people spoke in favor of continuing the study. Even members of the Bicycle Advisory Committee (BAC), who first proposed it, joined those calling for rescinding the study. 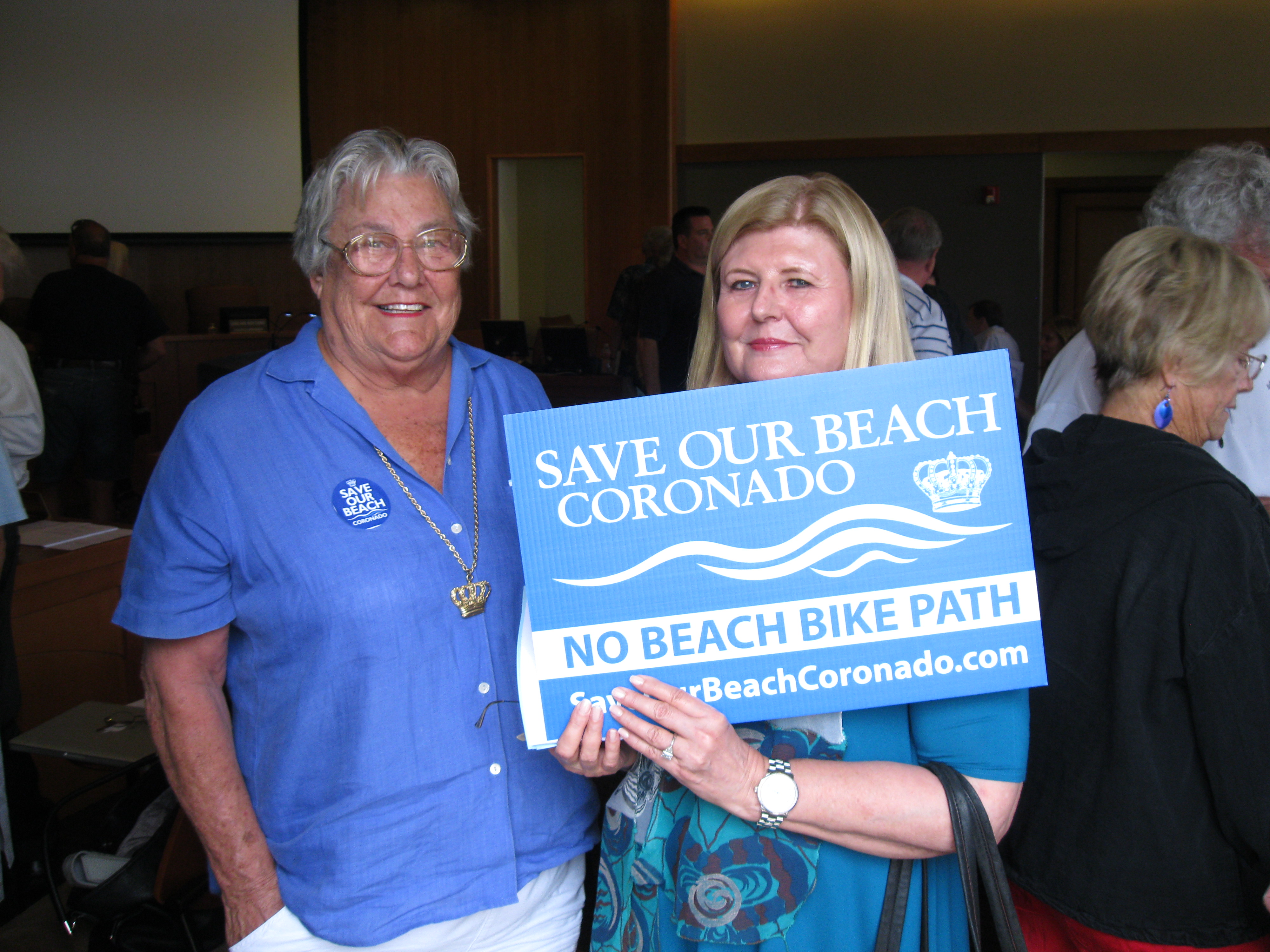 Susan Keith, left. Many credit her for alerting residents to the study. Susan Anderson, cofounder of Save Our Beach is standing next to her.

“I urge city council scrap proposal, It’s not the right time to come up with a solution,” said BAC member David Sweeney. He added that he hoped the people who stepped forward to stop this idea would continue to stay involved and help find a solution.

Others at the meeting echoed his call. Many speakers acknowledged that there were congestion problems in the corridor. “The safety, traffic, handicap access, are real, said David Fairbanks.

The studied was conducted by a private company the city hired with money from the feasibility study. It cost $6,000.

This is not the first time efforts to easy the congestion on Ocean Blvd have fizzled. 30 years ago someone suggested moving the rocks beach ward by a few 100 feet to widen the sidewalk.

“There was such a visceral reaction against it that the entire planning process came to a halt was never brought up again,’ Fairbanks said. “I’m not for or against this, but I hope what ever you do you don’t bring the process to a halt.” 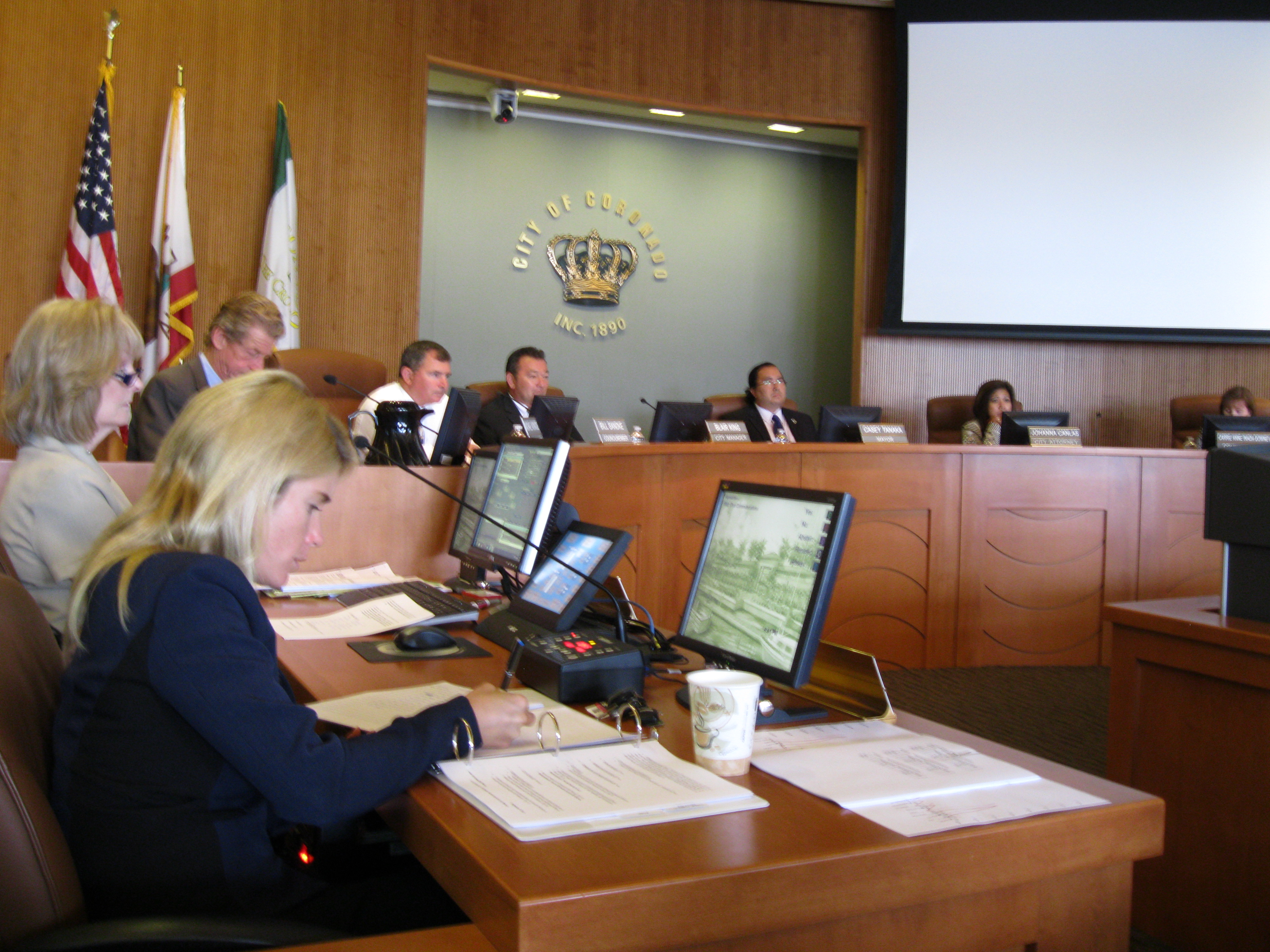 Once the council voted to scape the feasibility study it moved onto Councilman Richard Bailey’s requests to suspend the striping of streets with lines for bike paths and sharrows (shared bike and car paths) until their was a broader discussion of the issue and to reopen the Bicycle Master Plan (BMP) for more community input.

Because each had different time lines, the council elected to consider each separately. Striping on Olive Avenue was scheduled to begin presently and other streets were to follow. At a previous meeting the council had voted to strip streets during scheduled slurry sealing. The city does it every seven years to maintain the quality of the roadways. The BMP was already scheduled for a review in 2016, City Manager Blair King told the council.

Less than a quarter of the people stayed to discuss the other bicycle issue on the agenda. Most were from Olive Avenue.

They argued that striping would change the character of their neighborhood by turning the expansive boulevard into a thoroughfare and suggested alternatives. One was to simply reposition stop signs to make them more visible.

Members of the council argued that striping does make the streets safer, by slowing drivers down and keeping bicyclists off to the side. “Bike lanes work,” said Mayor Casey Tanaka.

He did acknowledge that the piecemeal approach to striping the council had taken and the council’s penchant for backing down every time a group of residents opposed striping their streets added to the problem.

It happened with Alameda and Country Club because residents didn’t want “hordes of bicyclist speeding” in their neighborhood. It happened with the “Safe Route to Schools.” Because a handful of H Avenue residents protested, only Sixth Street is part of the route.

“We didn’t do a good job,” Tanaka said. “We took the path of least resistance.”

The vote was 4-1. Councilman Woiwode opposed the measure, arguing that there was sufficient public notice for this and the BMP.

Bailey who asked that the striping issue be reviewed said the discussion was far more inclusive this time around and argued for more public input. He was not on the council when the BMP was passed originally.

Bicycles took up the majority of the council’s time. Rescinding the feasibility study alone took close to an hour and a half. The council quickly dispatched the consent calendar with little discussion. The Council agreed to put Bailey’s request to look at reducing the number of signs in the city. The vote was 5-0. It also voted 5-0 to postpone staff report on community grants the council had requested.