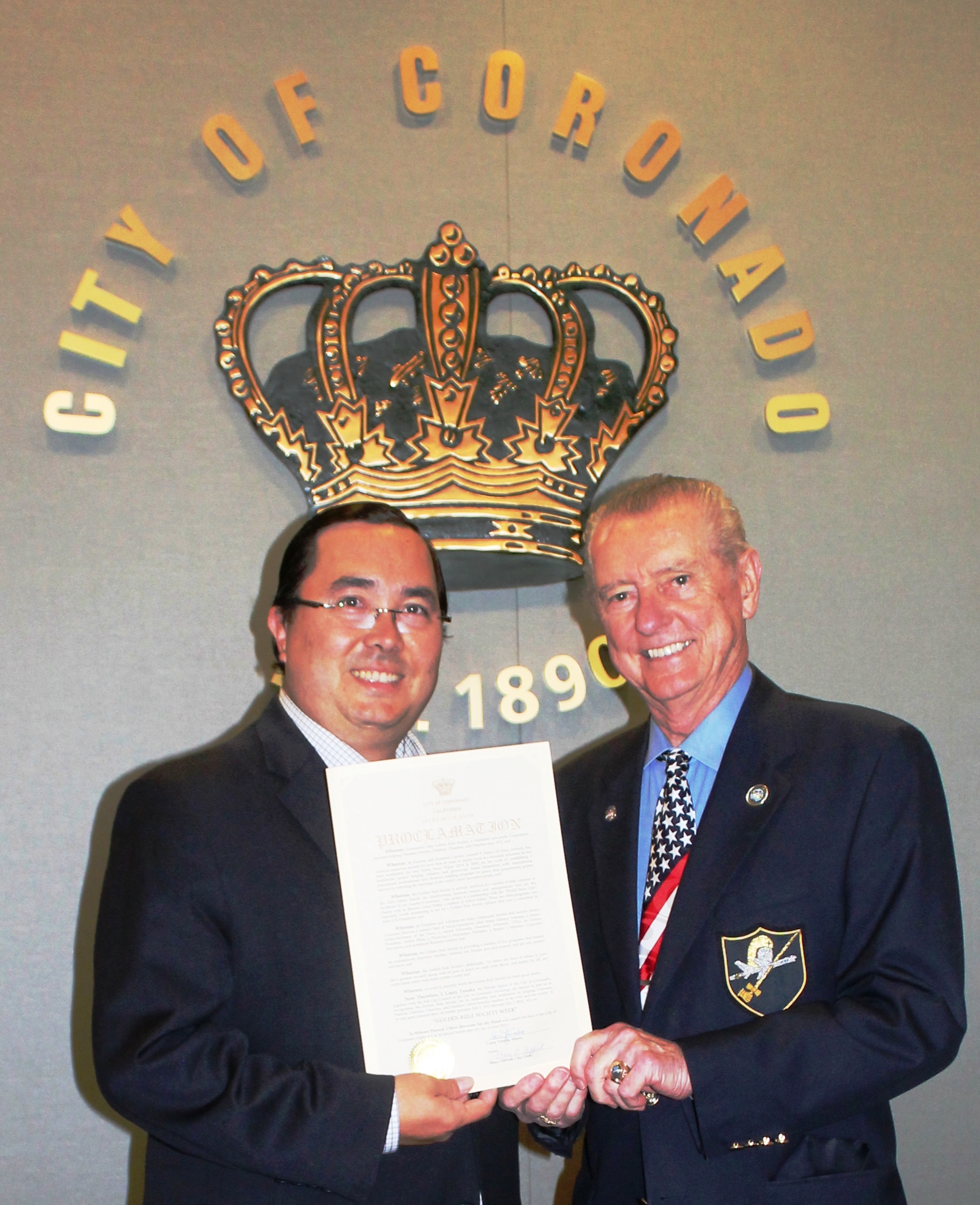 CITY OF CORONADO
CALIFORNIA
OFFICE OF THE MAYOR

PROCLAMATION
Whereas, Coronado’s own Golden Rule Society, a charitable, non-profit Corporation, has been helping Veterans, Patriots, Children, Churches, and Charities since 1972; and

Whereas, its Founder and President Captain Leonard P. Kaine, US Navy (retired), has received numerous awards for more than 43 years of charity work as a non-paid volunteer. He’s been nominated for two Nobel Peace Prizes (2014 & 2003) for his work in establishing a worldwide project helping children and grown-ups better themselves with inspirational, educational, motivational, and character building programs for peace, thus guaranteeing greater success by following the teachings of the world’s most successful people; and

Whereas, the Golden Rule Society is actively involved in a number of joint ventures in the USA which benefit the hardworking business owners and entrepreneurs who are the backbone of our country’s economy. One project is a partnership with the “World Peace One” charity with its director, Claus Nobel, a nephew of Alfred Nobel. There are other programs, one especially worth mentioning is run by a Golden Rule Society advisor who was a consultant to three US Presidents; and

Whereas, its Founders and Advisors are many community leaders that include former Coronado Mayors, a retired Chief of Naval Operations, other Senior Military Veterans, a former Under-Secretary of the Navy, a retired University President, Attorneys, CPAs, an Airline President, Airline Pilots, a Physician, a Newspaper Publisher, a Banker, a Minister, Corporate Executives, and prominent Business Leaders; and

Whereas, the Golden Rule Society is providing a number of free programs that benefit the unemployed, churches, charities, children, our Troops, past and present, and all who protect and serve; and

Whereas, the Golden Rule Society’s philosophy “To better the lives of others is your life’s greatest reward” along with its goal of peace on earth with liberty and justice for all, are noble ideals which help make a better world; and

Whereas, we want to sincerely thank the Golden Rule Society for their good works.
Now Therefore, I, Casey Tanaka, the Fiftieth Mayor of the City of Coronado, together with the full City Council of the City of Coronado, encourage all citizens to join us in recognizing the Golden Rule Society for its leadership and dedication in helping Veterans, Patriots, Children, Churches, and Charities, which benefits families of the USA and the world. It is with great pleasure that I do hereby proclaim July 1, 2015 through July 7, 2015, AD, as:
“GOLDEN RULE SOCIETY WEEK”

In Witness Thereof, I Have Hereunto Set My Hand and caused the Seal of the City of Coronado, California, to be affixed thereto this 16th day of June 2015.

Teens Invited to Participate in Staged Reading of “A Christmas Carol”