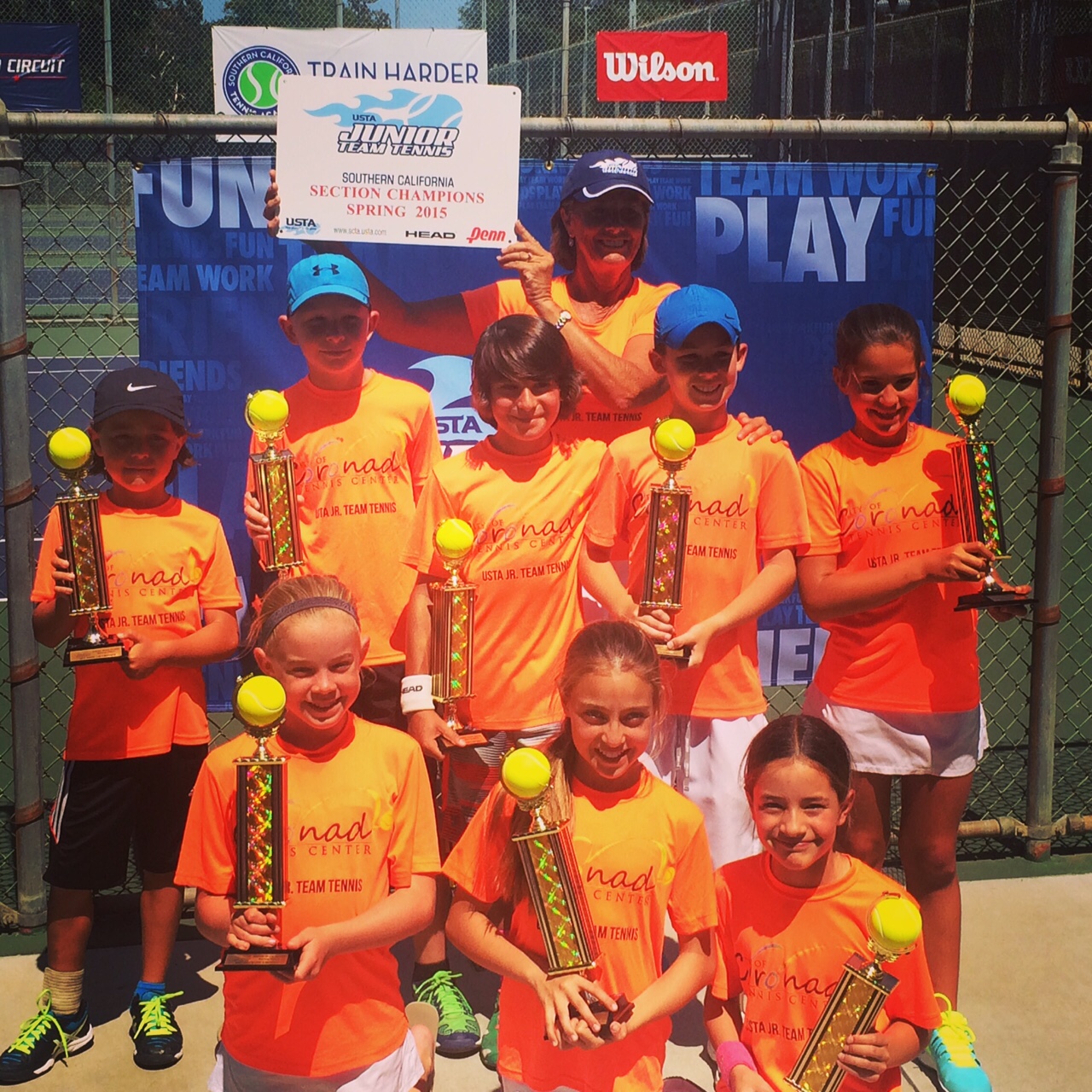 What’s big and orange with 16 legs and a feisty attitude? The Coronado Dolphins 10 and Under Tennis Team! Despite their small stature, the Dolphins made a big impression in their bright orange shirts, with their tenacious play and big shots. Led by 8 year old Luca Hernandez, the Dolphins were undefeated against teams from Los Angeles and Long Beach, and won by a margin of 4 games. The result depended on having a big win in their last match against iTennis ATC, and the Dolphins came up with the goods, winning 20-16 and clinching their win over second place Riviera from Pacific Palisades.

According to team coach, Narelle Pettee, what made the victory particularly sweet was that it was a total team effort, with all players playing in at least two of the three matches and contributing to the final team score. She was also impressed with the sportsmanship displayed by the team and the support of the many family members who were there to cheer the Dolphins on. “This is a very special team who always put the team’s interest ahead of self-interest, even if it meant sitting out when they wanted to play. It would be common for parents to complain about the line-up if their child was left out but these parents just let me coach and make the tough decisions. It was a great weekend.”

The Dolphins were one of four Coronado teams representing San Diego district. Teams from the 12’s, 14’s and 18’s also participated, finishing well in tough competition. One reason why Coronado tennis has become so strong is Director of Tennis, Sue Hites. Coach Pettee gives full credit to Hites for starting the programs necessary to develop champions, and for creating an environment where kids want to spend time on the court. With 8 pros at Coronado Tennis Center, the level of tennis in Coronado in adult leagues as well as juniors, has improved considerably. Last summer, one junior and two adult teams competed at National championships, an unusually high number for such a small community. “Sue has the ability to bring out the best in pros, students and kids and has completely changed tennis in Coronado in a short time. Coronado Tennis Center is the place to be!” We may be seeing a lot more of those orange shirts.

Coronado High School has many talented student athletes, some of whom choose to continue playing sports at the college level, and a select few...
Read more
People

Being a quarterback in the National Football League (NFL) is a career that so many in this country grow up dreaming about - a...
Read more

The state has issued a limited curfew for all counties in the Purple Tier of its COVID-19 risk assessment system, which includes San Diego County.The curfew...
Read more
Sports

Submitted by the Coronado High School HOSA ClubHOSA is a club at Coronado High school that is fun and open to all interested students....
Read more
Community News

By Mark Satta, Wayne State University This article is republished from The Conversation under a Creative Commons license.An endless flow of information is coming at...
Read more
Business

Give thanks this year among unmatched SoCal coastal views. Pairing a Thanksgiving feast with an upscale, sustainable, sea-to-table culinary experience, Serẽa is offering a...
Read more