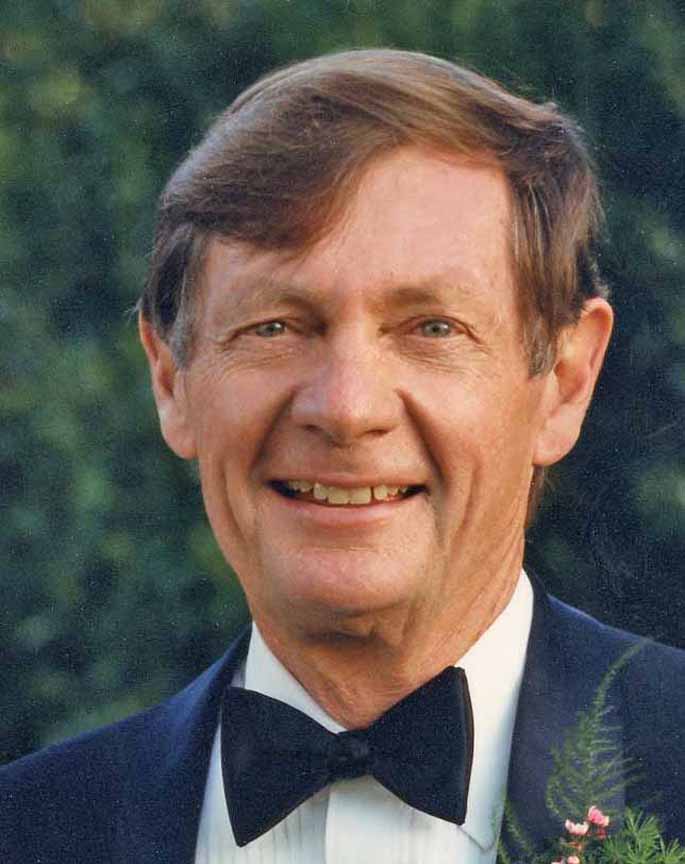 Ralph Mitchell died peacefully in his sleep on July 9, at the age of 92.

Mitchell was an accomplished piano player, a gifted athlete, a man dedicated to his family, and, for a time during World War II, he served his country as an intelligence officer spying on German U-Boat activities in Cuba. He had a wicked sense of humor and lived a life filled with acts of kindness towards others.

Mitchell’s Coronado High School long jump record from 1938 still stands  75 years later, an unheard of feat. Don Norcross, a reporter for the San Diego Union-Tribune, wrote in 2008, “Since 1938, when Mitchell jumped 23 feet, ¾ of an inch, an estimated 10,000 students have graduated from Coronado High. And still, his record stands.” As Mitchell told Norcross, “I felt like I was shot out of a gun.” 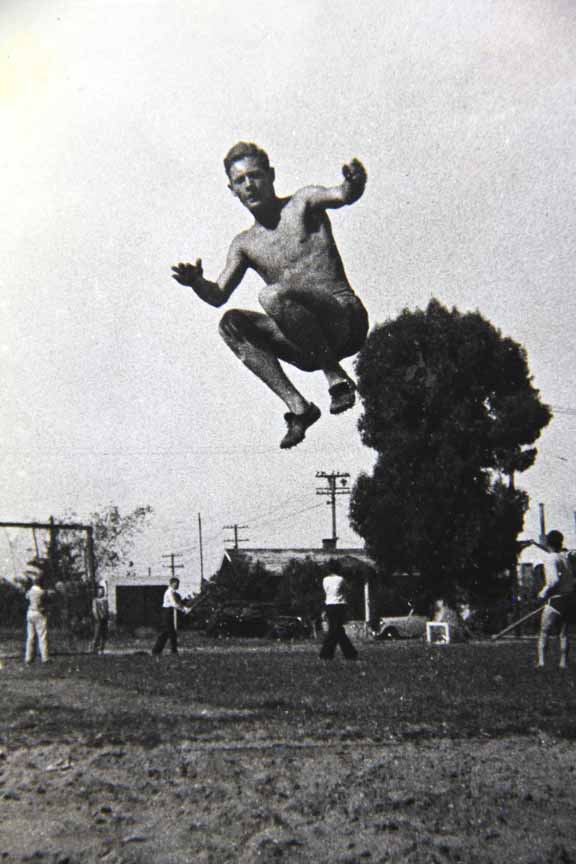 The day of Ralph Mitchell’s record-setting long jump, a Japanese friend suggested he was running too fast before his jump. The boy’s advice was to, “Run slower and jump higher”. Ralph’s record setting jump that day in 1938 still holds 75 years later, a fact he was very proud of.

Ralph Johnson Mitchell died peacefully in his sleep, July 9, of natural causes, and in the familiar surroundings of his home. He was 92. His own epitaph, which he was fond of saying, was, “The old man’s led a full life.”

Mitchell was born the only child to Belle Cross Thompson and General Ralph Johnson Mitchell on September 30, 1920, in Baltimore, Maryland. His mother was a passionate horticulturist and his father was in charge of US Marine air attack squadrons in the South Pacific theatre during World War II.

Mitchell traveled extensively as the child of a military officer, living all over the United States and in Guam and Nicaragua. In Nicaragua he learned to speak fluent Spanish  a talent that served him well throughout his life. 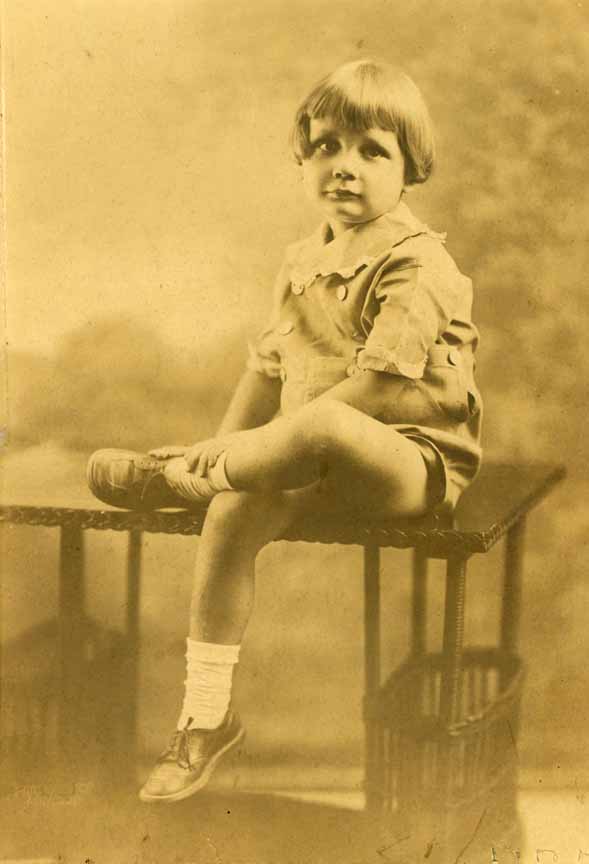 This Little Lord Fauntleroy look was very popular in the Roaring Twenties. Ralph Mitchell was an only child. As a military brat, he had to grow up fast. Along the way he became a track & field star, an accomplished pianist, and an all-around great guy.

He first came to Coronado in 1927 as a young child. The family moved several times before returning to Coronado in 1937. Mitchell graduated from Coronado High School in 1938, and had outlived most of his peers. Today, just one member of that graduating class survives – Colonel Richard Kenney, USAF (Ret), who competed against Mitchell in track & field.

“I first met Ralph in high school,” remembered Kenney, who still lives in Coronado. “We traveled in different circles, but got to know each other pretty quickly on the track field – usually with me finishing one or two behind him. He was fast in track, and very good at the long jump and the high jump. Ralph was a popular guy in school.” Kenny said that, outside of school, he was into sailing, he Ralph was into fishing. They graduated together, but then went their separate ways to fight the war. They remained in touch in recent years.

One of Mitchell’s favorite stories about that time occurred when the floating gambling casino, Monte Carlo, broke free of its moorings three-miles offshore and washed up on Coronado Beach one stormy New Year’s Day, 1937. It was a controversial “sin ship,” as the local religious leaders called it, where illegal drinking, gambling and whoring took place at all hours. 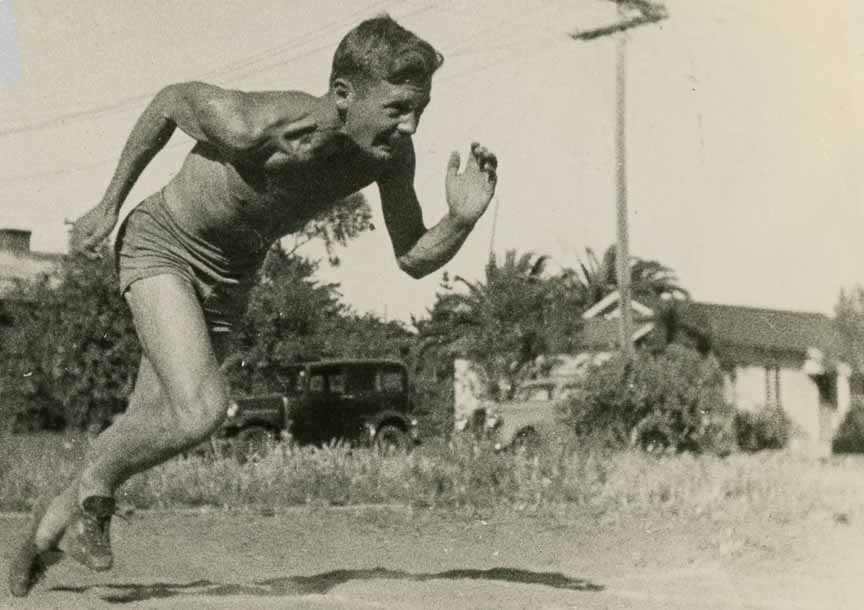 Ralph Mitchell, pushing the envelope during practice in his senior year at Coronado High School – 1938.

Ralph and a friend saw the 300-foot Monte Carlo drifting towards shore in the Coronado Roads. The two boys had been out fishing all night. They would frequently fish all night, then sell their catch the next morning as “Catch of the Day” for six cents a pound to the La Avenida Restaurant and the Hotel del Coronado.

According to Mitchell, “I had read somewhere that Admiralty Law dictated that an abandoned or deserted ship is fair game, and everything on it. So my friend and I pulled alongside in our small, homemade boat, and boarded her.

“I yelled out, ‘I, Ralph Mitchell, claim this vessel under Admiralty Law!’ Then I heard a gruff voice from down below. The fellow yelled, ‘Hey you kids, get the Hell off my boat.'” 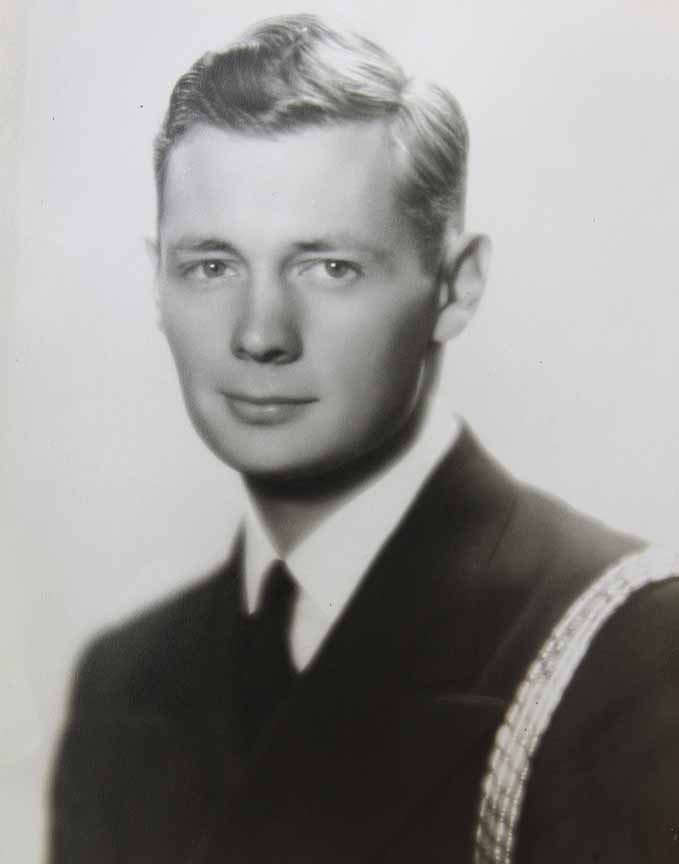 As a young officer, one of Ralph Mitchell’s first duty stations was Havana, Cuba. Let the adventure begin.

While stationed in Cuba, Mitchell’s duties included spying on German U-Boat activity along the coast and offshore. He found an eager collaborator for this adventure in new friend Ernest Hemingway.

Today the remains of the Monte Carlo can still be seen at winter low tides south of the Hotel del Coronado. Mitchell’s children and grandchildren surf over the wreck now. Rumors continue to circulate of thousands of silver dollars buried under the sand. Mitchell’s old classmate and track team buddy, Dick Kenney, had retrieved dozens of the old silver dollars from the beach that day in 1937, but no significant treasure has ever been recovered.

After high school, Mitchell went on to graduate from the University of Virginia (1942) with a BA in communications. He then graduated as an ensign from the Navy’s Officer Candidate School.

Mitchell only competed briefly in college, and never jumped 23 feet again. Plans to jump for the University of Virginia came to a halt when Mitchell suffered serious head injuries in a car crash in his freshman year. He was thrown through the windshield on his way home from a hunting trip. He would recall later that his father thought Ralph would never walk again. He was unconscious for four days.

He would never do the long jump again, but his adventures were far from over. After college, as a young lieutenant, Mitchell reported to Havana as assistant Naval Attaché to Cuba during WWII. He performed in a secret capacity for the US Navy as a spy, monitoring German U-Boat comings and goings, and investigating anything suspicious in that area.

Speaking fluent Spanish, Mitchell blended in with the locals and the notorious Havana bar scene, where it made it easier for him to match wits with German U-Boat captains as he accessed and decoded numerous secret messages along the coast and waterways of Cuba.

Mitchell’s own boat was docked next to Pilar, Ernest Hemingway’s boat. The war brought the two men together. While Mitchell generally declined to discuss his years as a government spy, he often spoke of how Hemingway introduced him to the Cuba Libre (Rum, lime and Coca Cola) at the Tropicana Hotel. He spent time with Papa Hemingway at the piano and fishing  the latter for fish and German submarines. 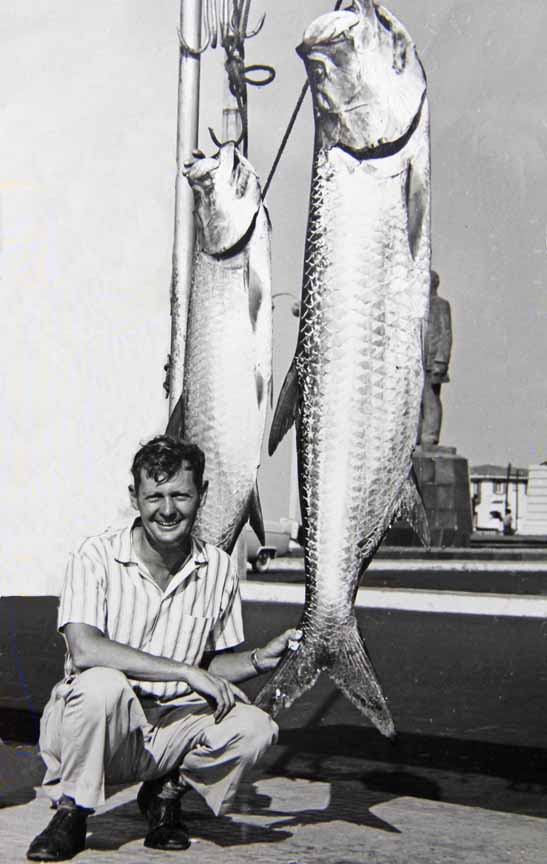 Like his son, Lorton, Ralph Mitchell was seldom far from the water and a fishing pole. He loved the sea and, obviously, shared that passion with his children.

History records that During World War II, Hemingway searched for German U-boats aboard Pilar. The 38-foot boat was outfitted with communications and direction-finding equipment. Hemingway’s search for the U-Boats inspired the third act, “At Sea”, in his novel “Islands in the Stream.”

Mitchell met his first wife, Gloria Hatch, in Cuba. They married and had two children. Ten years later they divorced and shared custody of their sons. He would serve in the US Navy Reserve for another 11 years, retiring at the rank of Lt. Commander.

He worked in Greenville, South Carolina for Pittsburgh Paint & Glass as their regional manager before accepting a position with their Mexico City division. He met his second wife, Florence Lewis, in 1957. She had two daughters from a previous marriage, and in a typical “yours, mine and ours” scenario, they married and had two children together  Lorton and Belle  making six children total. They returned to Coronado in 1965 at which time Mitchell owned a car-leasing corporation in National City – a new concept at the time. 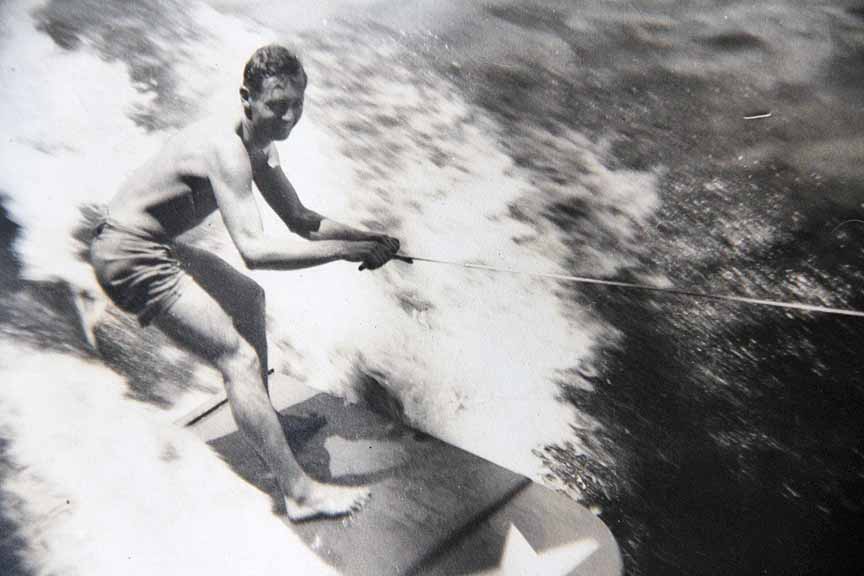 Wakeboarding behind a boat was a popular pastime in the Caribbean during WWII, and a great way to beat the heat. Here Ralph Mitchell is having far too much fun riding the wake of a fast vessel.

Ralph Mitchell was active in Coronado Rotary for nearly 50 years. He was a founding member of the Coronado Tennis Association, and a proud member of the Un-Concerned Citizens of Coronado  a weekly men’s luncheon where “old men told old stories,” as family members would describe it.

Ralph Mitchell’s name still appears on a brick wall outside the Coronado High School boys’ locker room  recognition of his long ago contribution to the school’s track & field history. This unusual form of immortality was bestowed for a physical act, in 1938, in the boys’ long jump. While some have come close, none have broken that record. 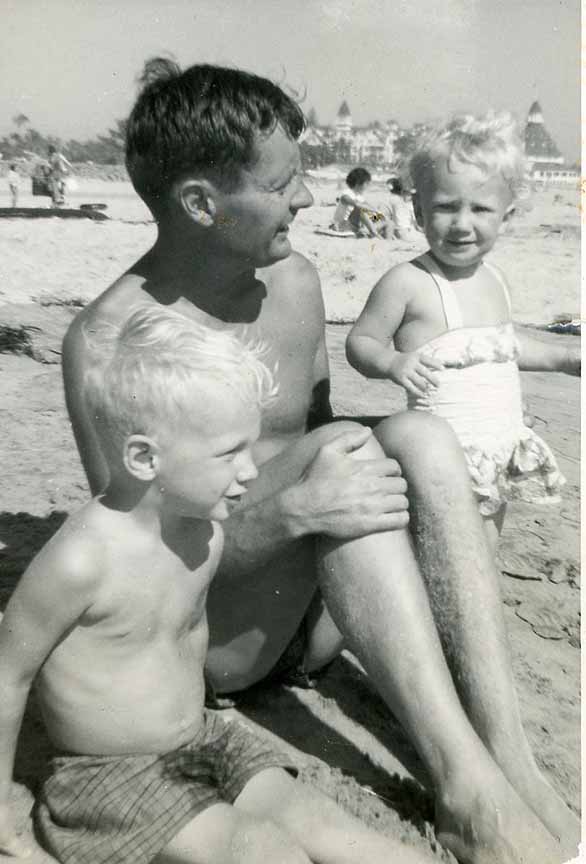 Ralph Mitchell and his two youngest children, Lorton and Belle, on the beach in Coronado.

Family and close friends of Ralph Mitchell are invited to attend a Celebration of Life at his home, and share memories and stories. The celebration will take place at 230 J Avenue, Coronado, Tuesday, July 30, at 5 p.m.

In lieu of flowers, the family requests donations be made to the Coronado Rotary Scholarship Program, “In Memory of Rotarian Ralph Mitchell.”

This obituary was created by Joe Ditler and LivingObituary.com. For more information write josephditler@san.rr.com, or call (619) 435-0767. 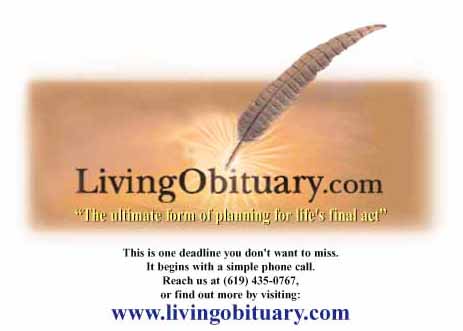