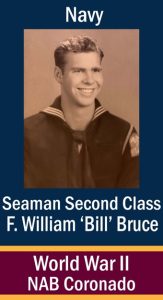 Frank William “Bill” Bruce was born on New Year’s Eve 1927 in Denver. His father was killed in an automobile accident when he was 5 years old, and Bruce never spoke of his childhood or early adulthood. Like many young men during World War II, he felt a duty to serve his country and enlisted in the Navy as a high school senior. After graduation, he left for boot camp in 1945 and then on to Coronado, California.

Bruce was assigned to Naval Amphibious (Training) Base, Coronado, where the Navy established a major shore command, supporting warfare training and operations. He served in the pay grade of seaman second class, equivalent to today’s seaman apprentice, and was paid the princely sum of $54 a month. Honorably discharged in July 1946, his pride in serving in the Navy was reflected in the anchor tattoo he sported on his arm.

Bruce earned a pharmacist certificate through an internship program, one of the last to become a registered pharmacist without a formal degree. He worked for a private pharmacy before becoming a pharmaceutical sales representative for the Upjohn and Stapleton companies. In his final years, he returned to working for private pharmacies and Safeway grocery stores.

Bruce married Joyce Benner, adopting her son, Gregory “Steve” Stephen, and together they had a daughter, Sandra “Sandi” Kay. They divorced in 1966. In 1971, he married Carol Kaslow.

With a sense of humor that fell somewhere between dry and corny, Bruce was quick with a joke, loved making people laugh, and was always smiling. A gregarious soul, people close to him knew him to be a man of honor, a man who believed in family, and a man of his word. In short, a man much admired. He also was an excellent handyman, a jazz aficionado, devoted Denver Broncos fan, and worked magic with a barbecue. On more than one occasion he was heard to exclaim, “Gad, I’m a good cook!”

Following military service, Bruce lived briefly in Wyoming, then returned to Colorado. He passed away in 1986 at the too young age of 58. Per his final wish, he was interred in Fort Logan National Cemetery, a national cemetery in Denver.