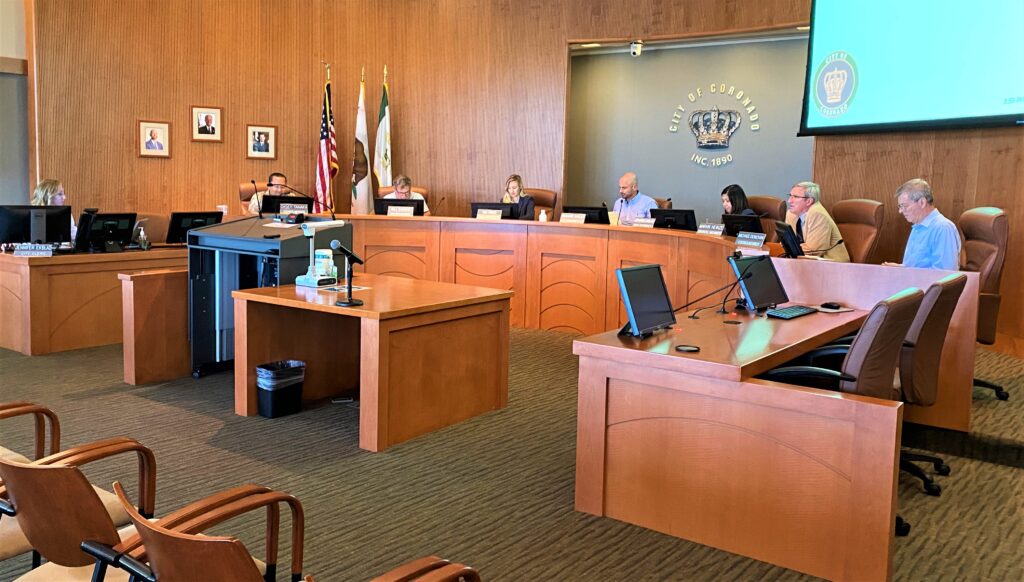 Safety was the theme of the September 20 City Council meeting as Fire Chief Mike Blood gave an update on Coronado Fire Services. He presented incident data from July 1, 2021 through July 1, 2022. A total of 2,260 incidents occurred with 1,058 transports, which means that the EMS received approximately 6.2 calls per day, with an average of 2.9 daily transports. He noted that the median response time was five minutes, with three minutes and 35 seconds of travel time. Blood then gave a breakdown by area (see charts for details). He went on to say that the Fire Department conducted nine fireworks inspections, six membrane structure inspections at local hotels, and 17 business inspections. He said that the mandated inspections have fallen behind, and they are working to catch up, and anticipate being current by April 2023. 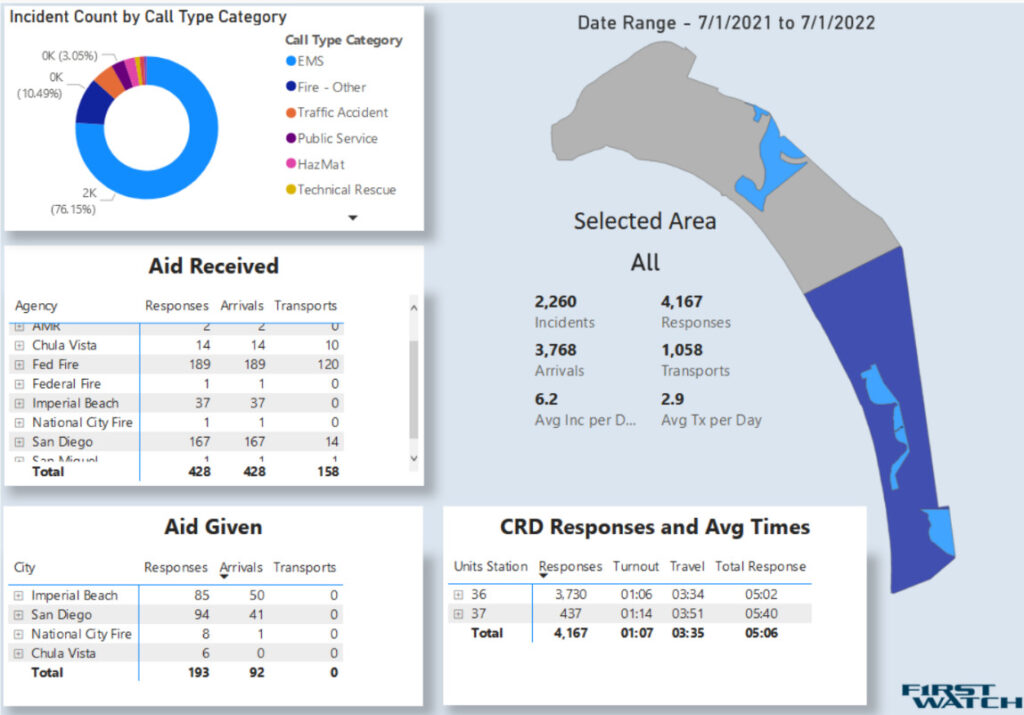 The Fire Department is also involved with public education in a variety of ways. They have conducted active shooter presentations at schools, the Rotary Club, and for city staff, and gave a disaster preparedness presentation for seniors at the Spreckels Center on September 9. The “Learn not to Burn” program will be brought back for elementary students. He also promoted the upcoming Public Safety Open House on October 9, which is a great community event.

The Emergency Operations Center has had a large number of turnovers and they are working to get all the positions filled. Staff will be attending a variety of specialized training and participating in the San Diego County Disaster Drill on February 2. Blood highlighted that training for firefighters is quite rigorous, with more than 250 training hours logged annually. They also conduct interagency in-service training with metro zone partners. Probationary firefighter training requires 96 hours of paramedic evaluation, and a 120-hour orientation mini Fire Academy starting October 3.

Moving to beach lifeguards, they performed 480 ocean rescues, and saw 1,624 minor medical aids, mostly from stingrays, with 41 major medical aids requiring transport by Coronado Fire. There were 9,776 code contacts, which include dogs, kites, glass, vessel warnings, etc. The new water quality testing methods, implemented in May, have resulted in one advisory at North Beach, and six at South Beach.

With the growing concern over e-bike safety, City Manager Tina Friend reiterated that the city has put together an interdisciplinary team to come up with solutions. She introduced Police Captain Dustin Kulling, who gave a timely update on bike statistics from September 2021 through August 2022. For this timeframe, solo bike accidents were 14, and vehicle versus bike accidents totaled 18, which accounted for 53 percent of all accidents. Bike versus pedestrian and bike versus bike accidents came in at 1 each, for a total of 34 for the year. Kulling noted that it was hard to differentiate bike and e-bike accidents, and that not all accidents are reported.

From January to August 2022, there were a total of 176 juvenile bike contacts, with 119 written warnings, and 57 citations issued. The data does not delineate which were regular bikes versus e-bikes, but Kulling said that verbal counseling is also used regularly by police officers, and those contacts are not included in the data. In April 2022, three bike rodeos were held in conjunction with Coronado Unified School District, Coronado MainStreet, the Coronado Mobility Commission, and the San Diego County Bike Coalition to promote bike safety. A new speed survey of 45 bikes was recently conducted on the Bayshore Bikeway, and the results saw an average speed of 14 mph, with a top speed of 23 mph. He noted that an unusual incident occurred this week, when an officer spotted a 17-year-old riding an e-bike, with no helmet on the shoulder of SR-75, with an estimated speed of 50 mph.  The youth was cited, and the e-bike impounded. Kulling pointed out that this was not a typical case, because Class 1 and 2 e-bikes go up to 20 mph, and class 3 e-bikes go up to 28 mph. The Police Department is working to create a roadmap moving forward and analyzing data, education, signage, and enforcement as part of “taking a broad look at the problem” and developing solutions.

Councilmember Heinze asked how many collisions involved e-bikes, but Kulling said that data isn’t readily available, but he guesstimates about one-third. The Mobility Commission is working on an app, so riders can self-report incidents, in hopes that will lead to more accurate data. Councilmember Tanaka promoted that “the more contacts, the better” to get the safety message across. He also asked if the police were interested in using e-bikes for patrol and was told they are looking into it. Kulling pointed out that police officers regularly stop kids and praise them for wearing helmets and stopping at signals and stop signs. Councilmember Sandke asked if Police Services Officers and Senior Volunteer Officers can help with additional presence and warnings. Councilmember Donovan said that the state needs to update the ordinances, but that won’t happen until next summer, and asked what the city can legally do before then, saying, “We have to get creative to deal with this.”  Friend and the mayor both said the city can look at regulating where e-bikes are allowed.

Fire Division Chief Jayson Summers reported that they responded to 27 bike accidents in 2021, mostly on the strand. His observation is that bicycles on the strand are not typically e-bikes. Of the 15 incidents in 2022, 11 were considered mild, meaning they were non-life threatening, requiring something simple like a band aid or ice, two were considered moderate, which were still not life threatening but required a higher level of care, and two were acute, requiring the cyclist to be taken to the hospital.

Councilmember Donovan highlighted the celebrations in Coronado for the 235th anniversary of the signing of the U.S. Constitution that was spearheaded by Judy Bowen. The first was a presentation on September 13 by Councilmember Tanaka on the Genius of the Constitution. The Daughters of the American Revolution gave an award to the Library for promoting the ideals of the constitution at the “Let Freedom Ring Across America” event on September 17 at the Library Park, where a city proclamation was also given. The Coronado Band played patriotic music, and the 65 attendees all rang bells at 1 pm Pacific Time for one minute, to signify when the constitution was signed.

In Oral Communication, Kevin Reilly proposed the idea of a design competition for the 16-acre Cays Park. He distributed a flyer that offered $10,000 for comprehensive schematics and drawings, and said he hopes this idea would re-engage the public. In response, Mayor Bailey asked Friend when the new Request for Proposal (RFP) would be brought to council for the Cays Park Master Plan, and she indicated that the council would see it at the October 6 meeting.