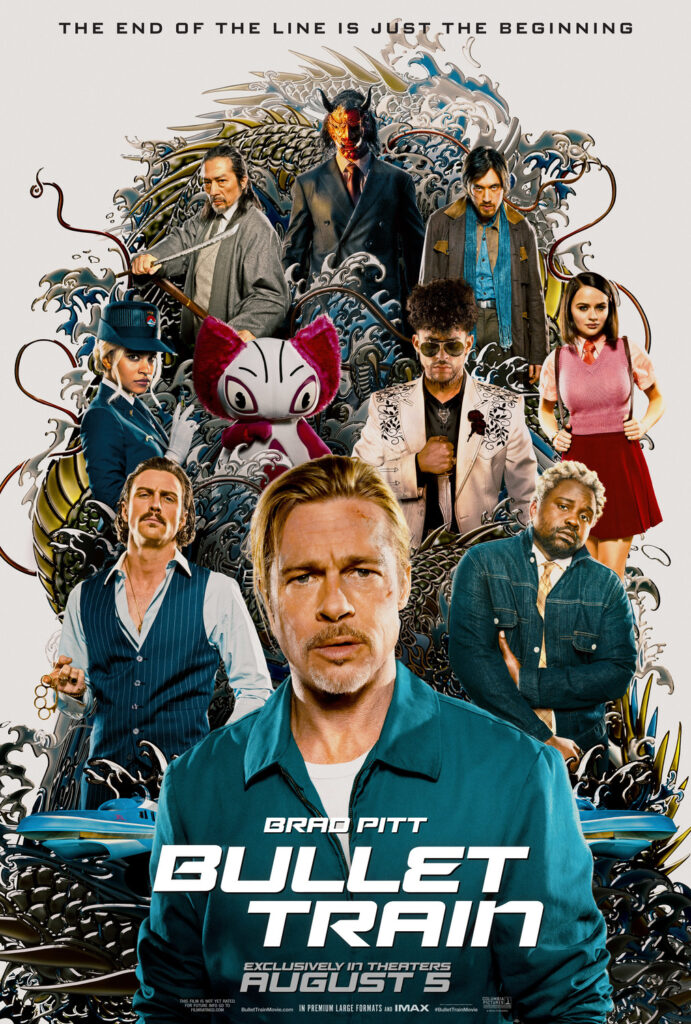 Snakes, guns, swords, explosives, and just about any other weapon you can imagine are used by the numerous assassins in “Bullet Train.” Most of the fast-paced movie takes place on a sleek speeding ultra-modern train from Tokyo to Kyoto, with a few brief stops along the way. The movie has star power with Brad Pitt, who is an unlucky assassin, ironically named Ladybug, which symbolizes luck. Not your typical assassin, he is in therapy and recites peaceful mantras throughout. The movie also includes Kimura, a distraught father, played by Andrew Koji, and his father, played by Hiroyuki Sanada, who are seeking revenge for the attempt on their son and grandson’s life.

Aboard the train, the diverse cast of assassins continues with Prince, played coquettishly by Joey King, Lemon, played comically by Brian Tyree Henry, and Tangerine, played connivingly by Aaron Taylor-Johnson. The international adversaries also include The Wolf, a Mexican assassin out for revenge, played by Bad Bunny, the well-known Puerto Rican rapper, and Zazie Beets, who plays Hornet, disguised as a Japanese children’s character and host. They have been lured onto the train by White Death, a soulless, deranged Russian villain, played by Michael Shannon. White Death supposedly wants his son and ransom returned. It’s hard to keep track of who is trying to kill who during this gory, sometimes comical train ride, filled with fights, stunts, and blood galore. These often lethal, sometimes sentimental assassins are a quirky lot, with Lemon as an enthusiastic fan of Thomas the Tank Engine, sharing his train stickers, while assigning train characters to each person based on their personality.

With a bucket hat and black rimmed glasses, Pitt as Ladybug does not appear to be the typical assassin, and in reality, is just filling in to steal a briefcase. Pitt performed 95 percent of his own stunts in the film. Sandra Bullock’s voice is recognizable as Ladybug’s handler on the phone, and she makes a brief cameo appearance to save him at the end of the line. Strangely, Channing Tatum pops up randomly as well.  At one point “Holding Out for a Hero” blares from the loudspeaker in Japanese.

The story is based on the Japanese novel “Maria Beetle” (published in English as “Bullet Train”) by Kōtarō Isaka. This movie has been likened to a Tarantino film and Director David Leitch, who also directed “Deadpool 2,” uses flashbacks for parts of the movie. Geared for audiences who love over-the-top gore and violence, with choreographed fight scenes. Hold on to your seats for this long ride culminating with a giant dramatic explosion, as Ladybug walks away unscathed.