The Leukemia & Lymphoma Society Announces Winners of 2022 Man & Woman of the Year and Runners-Up in the Fundraising Competition including Akbar Khan, and Team Khanfidence, of Coronado

Every nine minutes, somebody in the U.S. loses their life to a blood cancer. And, in today’s times of uncertainty, cancer patients need support now, more than ever. Eleven individuals in San Diego have remained laser-focused on their pursuit of a world without blood cancer, taking on The Leukemia & Lymphoma Society’s philanthropic competition, Man & Woman of the Year, by storm.

During a spirited 10-week campaign, candidates across the country competed to raise the most funds to ensure a world without blood cancers.

Akbar Khan and Nancy Hughes were each named Runners-Up in the Man & Woman of the Year titles, respectively. Khan, who also surpassed San Diego’s fundraising record by raising over $306,000, ran his campaign in honor of his daughter, Zainab, a leukemia survivor. Khan and his family are longtime residents of Coronado. 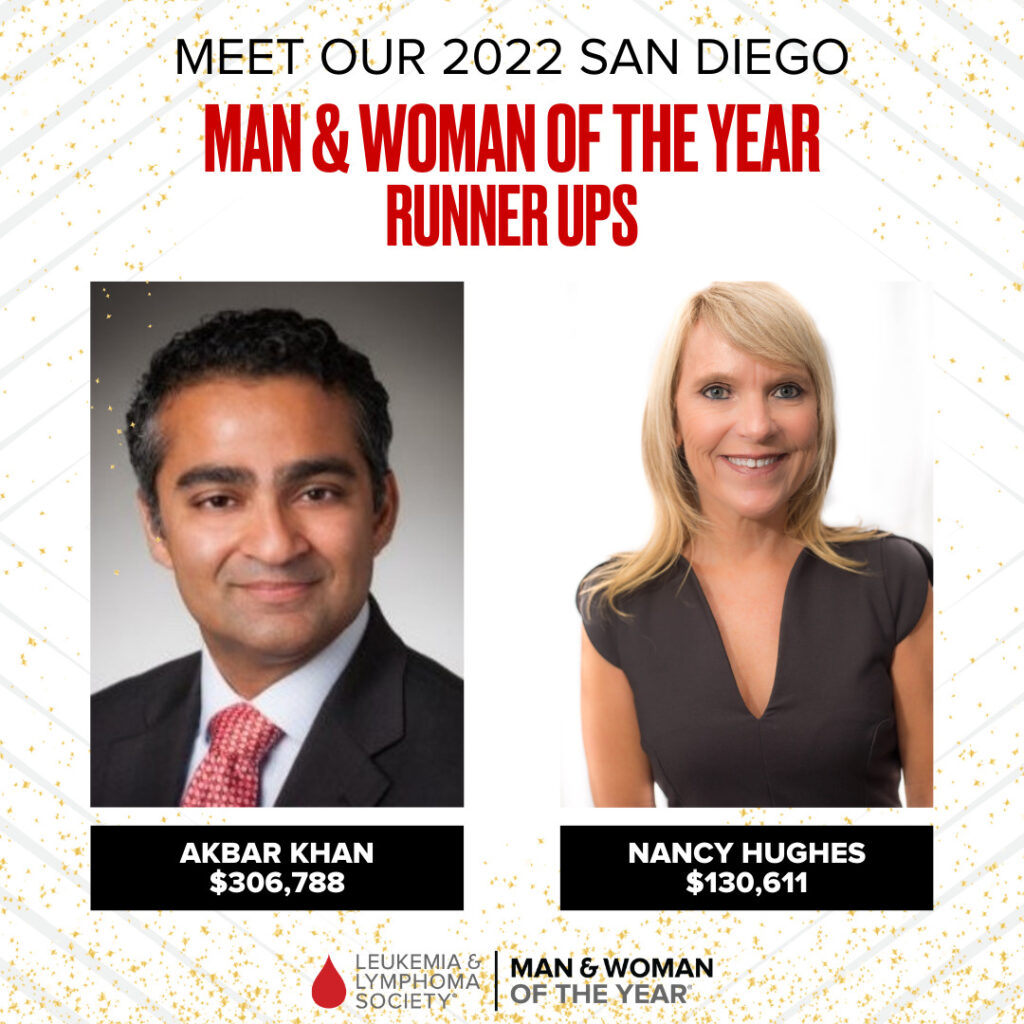 Khan and his Team Khanfidence rallied their local businesses, schools and neighbors and gained support from pretty much everywhere in the country. They sold t-shirts, had a vendor event, raised funds with Gelato Paradiso, and even had a second grader organize a bake sale. Khan utilized his network and reach to highlight the mission of LLS, but more specifically the journey his daughter has gone through as a leukemia survivor. He’s planted the seed of LLS’s mission in hearts and minds throughout Coronado, San Diego and the entire county.

San Diego’s 2022 Candidate Class included 11 individuals, who raised an impressive combined total of $1,589,021, which is a new local record for the campaign. Eight of the eleven candidates rallied the support of their teams and communities to raise over $50,000 each: Akbar Khan of Coronado, Kyle Verkouteren of San Diego, Lori Cavallo of Del Mar, Nancy Hughes of Little Italy, Natalie Sherod of Del Sur, Sully Sullivan of Del Mar and Tracy Croxen of San Marcos.

The funds raised through Man & Woman of the Year are used for:

“Congratulations to our winners, and to all of our candidates and campaign team members who participated in this year’s Man & Woman of the Year campaign,” said Hadley Weiss, LLS Southern California & Hawaii Campaign Director. “These exceptional volunteers are all unstoppable leaders in their communities. Together, we are getting closer to LLS’s goal of a world without blood cancer.”

Since its founding in 1949, LLS has invested more than $1.5 billion in cutting edge blood cancer research worldwide, and its support has been instrumental in the development of nearly every breakthrough in blood cancer treatment. To address the unique concerns of blood cancer patients throughout the pandemic, LLS has amplified its longstanding efforts to provide free information and support to blood cancer patients and their families, while also advocating for policies that will protect patients.

Visit the Man & Woman of the Year website (www.mwoy.org) and learn how you can become engaged with LLS.