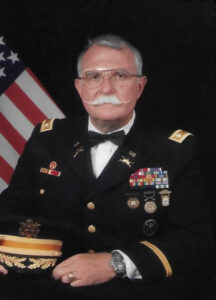 On 10 June 2022, LTC Floyd M. Moore (US Army Ret) quietly passed away in his home in Coronado. Floyd entered this world at a time of war to a family of Marines. His father served in the Marines in Europe and the Pacific. Floyd would always find the desire to serve as his primary driving force.

Floyd talked frequently about his time on Coronado as a child and happily regaled those times to anyone who would listen. He truly enjoyed telling tales about his first car and the numerous trips with his friends. If given the opportunity, Floyd was known to break out in the Coronado fight song, usually at the most inopportune times.

Floyd had four loves in life. His first love was to serve his country. Immediately after graduating high school in the Coronado High School class of 1959, Floyd joined the Marines where he excelled in his chosen environment. His performance during boot camp was so impressive that his first set of Marine blues was awarded to him as a result of earning the Leatherneck Award. He went on to obtain the rank of sergeant. However, his heart was set on becoming a Marine officer, so he left active duty to attend college in San Diego. It is a testament to his commitment that while he attended his college classes, he also was an active member of the Marine reserves, to include receiving accolades for attending a months long seminar series where he was the only enlisted member present.

Floyd graduated from San Diego State College with his bachelor’s degree in Sociology and applied to become a Marine officer. When the initial rejection came, he requested that the board reevaluate his records. Realizing his dream to be a Marine officer was not to be granted, he didn’t give up. He applied to and was accepted to become an Army officer. He excelled at his Army basic training and scored a perfect score for his advanced individual training at the end of his infantry course, a feat of which few are able to attain including myself.

Floyd was commissioned as an Army armor officer and served in Vietnam with the 11th Armored Cavalry Regiment, the Black Horse. To say he loved the Black Horse is a mild understatement. You will find Black Horse signs, stickers, and pins wherever he has been. Floyd’s medals from his Vietnam service include both the Purple Heart and the Bronze Star.

At the end of the Vietnam War, Floyd was moved to the Army reserves. His servant heart however would not let him rest. He again went to school to obtain his teaching credentials and graduated from San Diego State with a bachelor’s degree in industrial arts. He taught in Whittier, outside of Los Angeles, Bad Kreuznach, Germany as part of the Department of Defense, and finally in Calexico, near El Centro.

Floyd’s second love was his wife Becky. They met square dancing and his love bloomed. Floyd left for Germany to teach there and he left Becky behind, but his heart wouldn’t let him do it. In a long distance phone call, he asked her to marry him and she said yes. From that point on, they were a team. She complimented his life and he complimented hers. Together they traveled much of Europe and most of America. Odds are that if you travel somewhere, you can find Floyd and Becky’s footsteps.

Floyd’s third love was history. If you needed to get him excited, start talking about history, any history, but especially military history. He spent every opportunity to travel and learn the history of wherever he was. He went to more museums, graveyards, and memorials than I could ever relay in any amount of time. But what he truly liked to do was to meet those people who lived history. He was known for striking up conversations with caretakers and curators about what they oversaw and learning the real stories. His house is a living museum to where he has been and what he has seen.

Floyd’s last love was shooting. He started at a young age, earning awards in Cub Scouts. He followed this up in the Marines where he scored expert and received many accolades from his commanders. Without a doubt, he carried this skill and love into the Marine Corps and Army where he served on shooting teams for both services. We are unable to count the number of shooting awards he earned. He has shelves of trophies and walls covered with his awards. He was an all around shooter. He shot and excelled at all kinds of pistols and all types of rifles. His crowning shooting achievement was earning the Army Gold Distinguished Marksmanship Award in not just one weapon, but both the pistol and the rifle. Obtaining one is extremely rare, but both is an exceptional feat that only a handful of people have met.

It was with great sadness that LTC Floyd Mickey Moore (Ret) left us on 10 June. But true to his word, he died in his home on Coronado Island. Floyd’s body is gone to us, but his spirit remains forever through our stories and memories. He leaves a great hole in our hearts and we will miss him.

Floyd is survived by his wife Becky, his two stepsons Tom and David Wheeler, and his beloved cousins, Brenda Brown, Maridale Jackson, and David Lipscomb. Services have been held at Miramar National Cemetery. Donations to the South Bay Rod & Gun Club on his behalf are welcome and appreciated. The Coronado fight song will be missed in his home.