Musical theater has returned to the Coronado High School stage with Coronado School of the Arts’s (CoSA) Spring 2022 performance of the popular musical Mamma Mia. An uplifting story, high energy songs, and stellar dancing make Mamma Mia an engaging show for all ages. 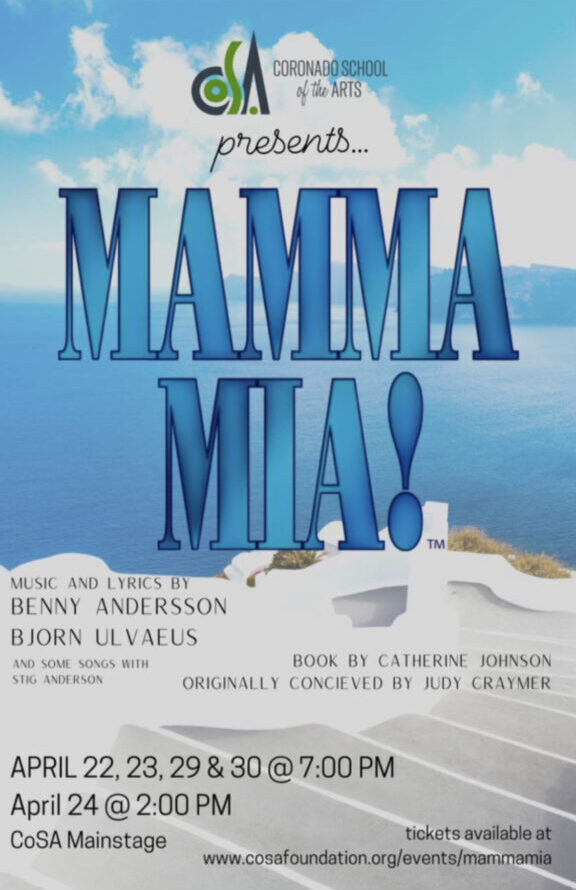 Mamma Mia is a fictional, humorous story about Sophie, a young woman getting married to her fiancée Sky on a small Greek island. Sophie dreams of having her birth father at the wedding, but her mother Donna does not know who is the father. Sophie reads her mother’s diary and secretly invites the three men who could be her father to the wedding in an attempt to find out which one is her father. The three potential fathers include an Irish-American architect, Sam, a Swedish adventurer and writer, Bill, and British banker, Harry. Sophie spends time getting to know each of the men who could be her father and enjoying the company of the other wedding guests. The musical performances include many memorable songs from the popular Swedish pop band ABBA to depict the comical events leading up to and including a surprise at the wedding ceremony.

The talented COSA students are eager for the community to enjoy the production of Mamma Mia. Cast members include:

Sky is portrayed by Declan Dineen.

After three performances this past weekend, two more performances will be held this weekend at the Coronado Performing Arts Center Main Stage located at 650 D Avenue, April 29 and 30 at 7pm. Mask wearing in the audience is encouraged but not required. Tickets can be purchased online at www.cosafoundation.org or at the theater box office 45 minutes before the performance.

CHS student Marlie Meoni attended the show last weekend and commented, “I absolutely loved watching Mamma Mia! It is one of my favorite musicals, and I’m so glad CoSA chose to perform it! It was so fun to see all my friends on stage playing the roles of my favorite characters!”

Chloe Berk
Chloe has called Coronado home since she could walk or talk and considers herself a true Islander. She is currently a student at Coronado High School and a writer for the Islander Times. After studying and writing articles, she enjoys volleyball, the beach, and her newly-adopted dogs from PAWS. Have news to share? Send tips, story ideas or letters to the editor to: man[email protected]