The pledge of allegiance was extra special at the March 1 City Council meeting, because it was led enthusiastically by girls from Girl Scout Troop 6530. Girl Scouts of San Diego CEO Carol Dedrich was on hand to commend the girl scouts for learning to adjust and learn new skills as they are experiencing a cookie shortage this year. Mayor Bailey presented a proclamation in honor of Girl Scout Week, which is March 6 to 12. The USA Girl Scouts was founded in 1912, to provide mentorship and education to young girls and has since inspired millions of girls to achieve the highest ideals of character, conduct, and patriotism. The cookie program is a beloved 105-year-old tradition that helps girls develop life and leadership skills like goal setting, decision making, money management, people skills, and business ethics, while earning funds for activities and community service projects. The girls capped off this award with a darling thank you video and cookies for the council members. 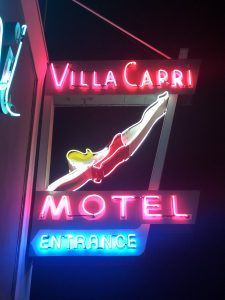 Construction amendments for Villa Capri By The Sea Hotel, located at 1417 Orange Avenue, were presented by Senior Planner Jesse Brown. The vintage two-story, 15 room motel is slated to be updated to a four-story hotel with a rooftop bar. The originally approved plan called for an underground garage to meet parking requirements with 21 spaces. Villa Capri has been able to enter into an agreement with its neighboring business Coronado Beach Resort for the exclusive use of 13 of their 76 spaces, leaving them more than ample parking. This was reviewed by city engineers and the Fire Department and was approved with the addition of a 24-hour valet, who can walk between the two properties. The new proposal greatly reduces the footprint of the underground garage, which will now only be needed for storage and back of the house uses. This saves time and money for this construction project and was unanimously approved by the council.

Community Development Director Rich Grunow gave a brief presentation on extending restaurant outdoor dining through September 30, 2022. This will be the third extension for this program which was started to help dining establishments during the pandemic. He pointed out that 23 businesses have taken advantage of this successful program, with no significant complaints or compliance issues. Several councilmembers asked how many businesses were utilizing parking spaces, to which they were told four to six.

Councilmember Heinze pointed out that for the path of travel on sidewalks, ADA requires four feet, but Coronado city mandated storefront etiquette was 7.5 feet, which was reduced to five feet to accommodate outdoor dining; and he advocated for changing that back to the original distance, especially since the busy spring and summer seasons are coming.  When he asked about ABC rules with regards to liquor licenses, it was pointed out that there must be a barrier and restaurants are required to comply with current regulations.  He complimented staff on their flexibility during these challenging times to help businesses.

MainStreet Executive Director Karla Robles-Puig and Board Member Eddie Warner asked the council to consider not allowing parking spaces to continue to be utilized for dining. Chamber of Commerce Executive Director Rena Clancy said she was excited about the extension for local businesses and asked the council to consider an indefinite extension with yearly reports. She said that their data shows that this program has been 100 percent successful.

Councilmember Donovan said he “sees this as a way to expand and fill the gap of losses over the last two years.” He pointed out that the shuttles have taken some of the parking burden off, but noted that he wasn’t in favor of an indefinite extension and asked staff to come back with alternatives to create permanent outdoor dining, outlining what changes would need to be made, including regulations, municipal codes, Coastal Commission requirements, etc. Councilmember Sandke also asked City Attorney Johanna Canlas to provide a road map to do this indefinitely, emphasizing that all businesses must be treated the same. Mayor Bailey noted that “outdoor dining has been a silver lining,” and said he sees a lot of upside to extending this indefinitely and he has heard broad community support for this program.

This dining extension was approved 3-2, with Councilmembers Tanaka and Heinze voting no. The approval came with the condition of staff coming back with a report in the beginning of September to look at legal, land use, and operational issues, with recommendations for alternatives to increase outdoor dining potentially on a permanent basis.

The council all felt that the 800 block and 100 block of Orange Avenue should be moved up the list, because they have been on the back burner for the last 15 years. Councilmember Sandke pointed out that with the Vons renovation, they could finish what has been started.  He liked the crown branding to carry a unified identity, as proposed in the matrix, and was in favor of all the short-term projects.

Councilmember Heinz expressed objection to flower baskets, because of their difficulty to maintain and noted that it was important to remember the serious infrastructure issues still needed, when contemplating enhancement budgets. Councilmember Donovan concurred with the flower basket maintenance issues and proposed placing lighting on trees and not hanging lights. He also expressed that he liked a consistent sidewalk treatment and felt that activating the medians was a lower priority. He referenced downtown National City as an example of not painting, but instead using textured pavers or other materials to delineate crosswalks. Councilmember Tanaka pointed out that history has shown that painting crosswalks makes it easier to obtain Caltrans approval. Mayor Bailey proposed all new trash cans, rather than painting the lids.

Everyone agreed that no additional signage is needed, but creating cohesive signage was important. Purvis pointed out that this would extend to store front a-frame store signs.  The mayor divided this into three motions ~ short, mid, and long-term projects, which were unanimously approved. 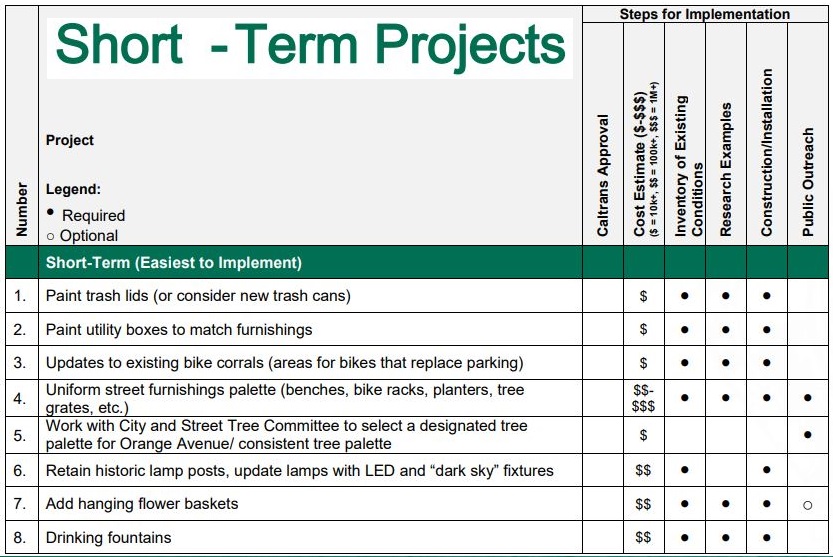 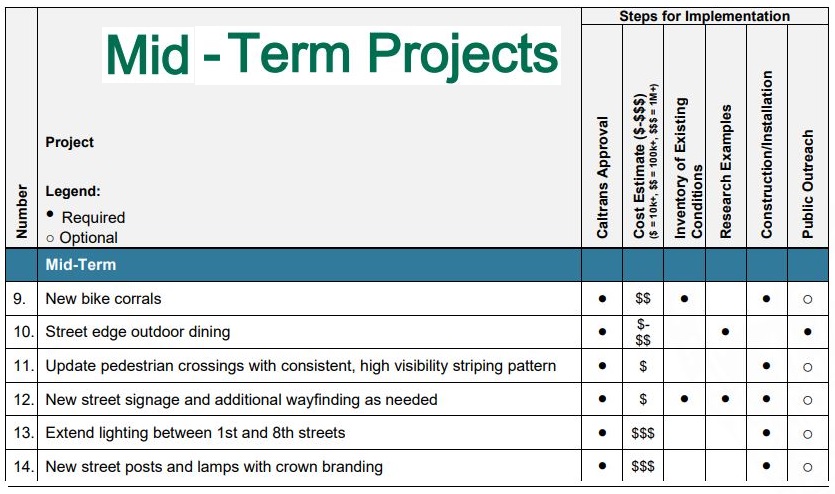 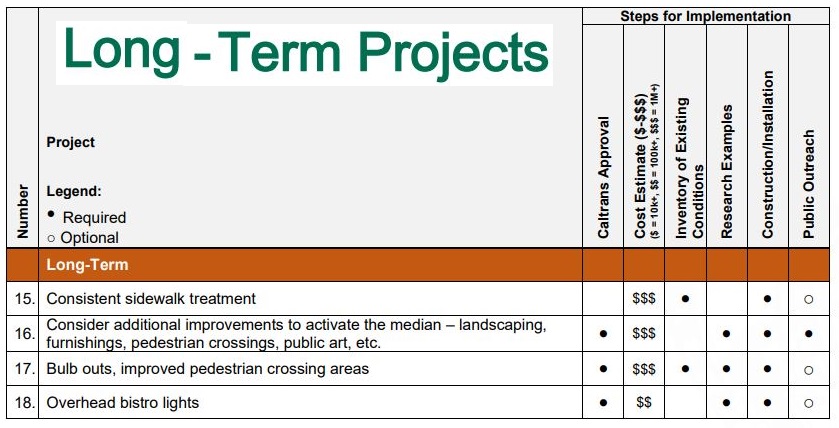 The 2022 free MTS Summer Shuttle was approved on the Consent Calendar.  Councilmember Sandke noted that MTS has been a great partner to work with.

Councilmembers Heinze and Tanaka attended a Winn Room expansion subcommittee and said that two new lower scope options are being costed out and will be presented this summer.