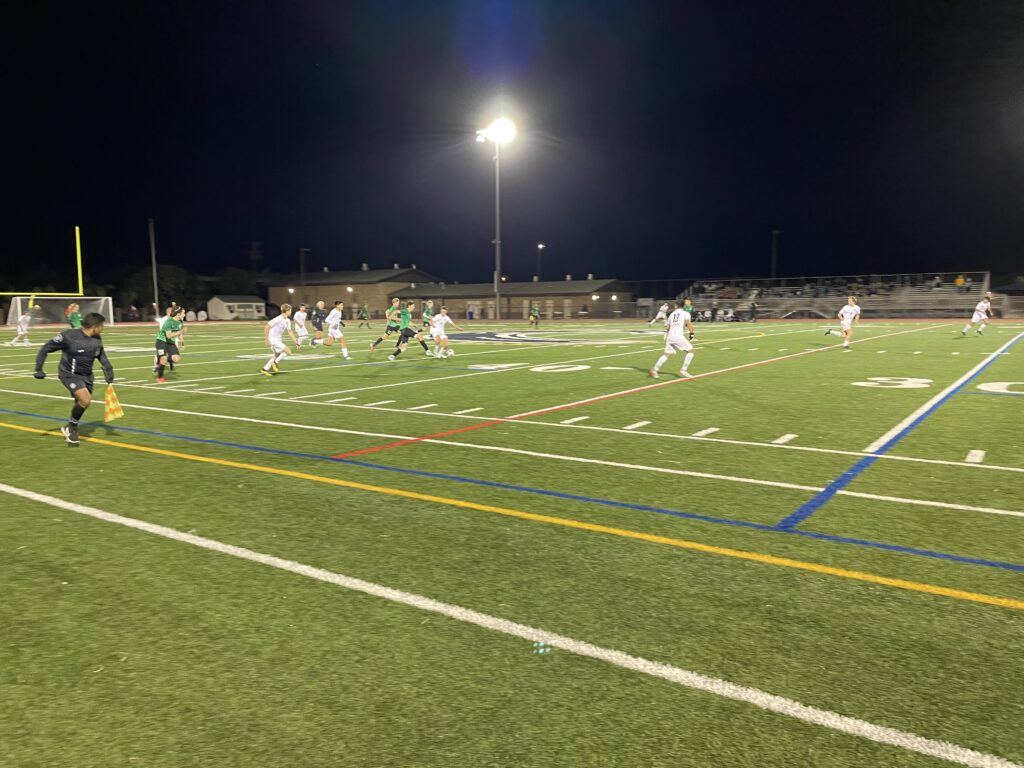 When the Islanders and the Pointers of Point Loma collide, no matter what sport or what location, there will always be fireworks. And Tuesday’s night matchup was no exception as the Islanders men’s soccer team took down the rival Pointers 3-2.

The Islanders came out and established the offensive tempo early, as they have done in almost every match all season, as both Connor Buckley and CJ Fodrey both ripped shots on goal within the first five minutes of the match.

To go along with some strong early attacks from the offense, the Islanders’ backline continued to be a headache for the Pointers. Ethan Hickey, Dylan Noble, and Jack Hunt, and perhaps most notably Nick Lorr, all did a fantastic job of cutting down the few Pointer attacks, flying around the pitch as if their hair was on fire.

“Nick has just been shut down for us all season,” said head coach Aaron Brooks. “He wins tackles, he understands the game, and he understands what to do with the ball at all times. He’s one of the many leaders on this team. He’s what we want an Islander to play like.”

With the team clicking at all levels you just got the sense that a goal would be on the way for the Islanders. In the 17th minute, following a foul 22 yards outside the box, Fodrey would step up and lace a ball back into the left corner of the net making it a 1-0 Islanders lead.

However, Fodrey was just getting started. Just 15 minutes later he found the back of the net again making it a commanding 2-0 Islanders lead in the 36th minute.

“CJ is simply dynamic,” said Brooks. “Those two goals tonight were massive and it shows just how talented and special of a player he is with the ball at his feet. He made plays when we needed them tonight.”

In the last few minutes of the first half, it appeared that the Pointers would draw the score close but thanks to superb clearance by Hunt on a point-blank shot opportunity and a fine save by keeper Tony Miley, the Islanders held their 2-0 lead heading into the half.

“That play by Jack at the end of the half shows what makes him so special and why he’s going to play at the next level. He constantly flies around winning clutch tackles,” shared Brooks.

Coming out of the half the Islanders came out as if they hadn’t even stepped off the pitch as they continued to pepper the Pointer goal with a fine shot after a fine shot attempt. It yet again felt as if it was just a matter of time until the Islanders struck, and in the 60th minute, that moment came. After a great run by Buckley, the senior was fouled, giving the Islanders another free-kick attempt.

Garrett Sauter stepped up and sent a seed into the box that was flicked in by Hunt. A truly clinical goal that was capped off by a fine celebration by the two seniors and giving the Islanders a 3-0 lead with 15 minutes to play.

However, the Pointers would not go away quietly. Over the final 15, Point Loma would strike for two goals to make it a 3-2 game in stoppage time. Despite the referees allowing the game to be played well beyond the 5 minutes of stoppage time, the Islanders were able to hold on and take home the massive 3-2 win over their rival.

Coach Brooks said, “Point Loma is a top 10 team, they’re well-coached. So this is a huge win for us. These are the types of teams we want to be beating and we can build momentum on. If we want to compete for that Open Division Title we’re going to have to have games like this.”

And they have been building momentum. Following the win over the Pointers, Coronado took care of business in their second match of the week as they took down Monte Vista 5-2, thanks in large part due to four goals by Buckley.

The Islanders will return to action on January 5th when they face off vs. Central High School.

CUSD is Hiring Lifeguards for BBMAC