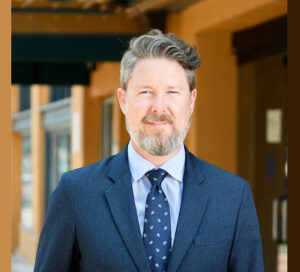 San Diego Theatres has announced the promotion of Coronado resident Brendan Farley, former Director of Operations, to Vice President of Operations. Farley will oversee the Operations Department and directly work with the Diego Theatres team to curate moments that matter for the Balboa and Civic Theatre stakeholders.

With 30 years in the performing arts industry, Farley is an expert in all the complexities necessary to curate memorable moments.

Farley shares, “I want to tap into that creative voice and spirit within the industry to express passion for the experience people get to have when they come to the theatre. I want to tie this creativity into the corporate vision of creating moments that matter while keeping traditional practices in the forefront of making decisions and adjustments.”

Farley’s leadership style incorporates a bottom-up structure, allowing the employees in the forefront of venue management and those who directly interact with clients to be the foundation of corporate decisions. Farley plans to build on the current success of San Diego Theatres as a venue management organization with open collaboration, participation and transparency to creatively foster growth with event partners, stakeholders and employees.

“We are extremely grateful for Brendan’s tireless work the past six years and I look forward to his unique perspective to guide our incredible team,” said Carol Wallace, CEO of San Diego Theatres.

Farley and his wife Katherine have lived in Coronado since February of 2010. They moved here shortly after their son was born, and he is now in Coronado Middle School.

The Coronado Times asked Brendan a few questions about living in Coronado:

What brought you to Coronado?
My wife Katherine (Lohlein, daughter of the Coronado power couple Barbara and Ed Lohlein) grew up here. Many of our friends are from Coronado, and were living all over San Diego. Slowly but surely, we were finding ourselves spending more and more time in Coronado as we were starting our families. And there is no better place to raise a family than here.

What do you love about living in Coronado?
I love the small town aspect – seeing people I know, or who know my wife and in-laws, all over town. I also love the multi-generational families’ friendships that we get to be a part of. Katherine has so many “Coronado Cousins” and friends where the grandparents are friends, we as parents are friends, and now the next generation are friends. Such deep roots make occasions and traditions so much fun. I also love the service-oriented culture of the town. So many people give back. It is a community for the people by the people.

What do you enjoy doing in your spare time?
I mean, there is nothing better than Muni-tennis on a Sunday with some pals. Plus, riding bikes along Ocean Boulevard, playing music, and getting out and hanging with friends.

Anything else you’d like to share?
I count myself lucky to be part of such a great community. Many of our friends are Coronado by birth, always dropping in their “CHS, Class of 90-something…”, but we have also met amazing people who have made Coronado their home by choice. I am grateful for that mix of people. They support me, recharge me and inspire me in all the different areas of my life.

After graduating Ithaca College with a degree in acting, Farley launched his career in performing arts as an actor and technician in New York and Chicago theatres. Farley began venue management at Oakdale Theatre in Wallingford, CT in 1998 where he progressed from Shop Foreman to Technical Director and eventually Director of Systems and Production. Farley began with the San Diego Theatres team as Director of Operations, where he managed the Front of House and Food and Beverage programs as well as the Public Safety, Production, and Engineering departments. Farley’s well-rounded background will allow him to effectively manage complex events and the diverse team at San Diego Theatres.