Sometimes even good things have to come to an end, a lesson that the Islander football team unfortunately learned last Friday night as they fell to University City 49-15.

Going into the game, it was no doubt going to be a battle for the Islanders. Just three weeks ago UC beat the Islanders 60-14. But with a strong week of preparation, the Islanders felt confident that they would be able to flip the script this time around.

The Islanders would start the game trailing early after an opening drive TD from UC, and things began to look bleak after the Islanders went three and out on their ensuing possession.

However, the Islanders defense stepped up in a big way following the punt, as on back to back plays Finley Alexander recorded a tackle for loss and Asa Valdivia recorded a key third down sack to get the Islanders off the field.

The Islanders’ third down was a big reason things were so tight for much of the first half as Coronado held UC at ⅕ on third down in the first 16 minutes of the game. Whether it was Alexander, Zane Declore, Logan Eastlick, or Valdivia, those in green and white uniforms stepped up on third down.

After the defensive stop, the Islanders were gifted with great field position at the start of the second quarter at UC’s 40-yard line thanks to a shanked punt by the Centurions.

Set up in their opponent’s end of the field the Islander’s offense would get rolling. Following a first-down rush by Zane Delcore, QB Hudson Herber found Elias Valdivia and Graham Bower for back-to-back 12-yard gains through the air, setting up the Islanders with a goal-to-go situation.

Just one play later, the Islanders would again call on Delcore who found pay dirt for the 11th time this season, and tied the game at 7-7 with 10:04 left to play in the half. 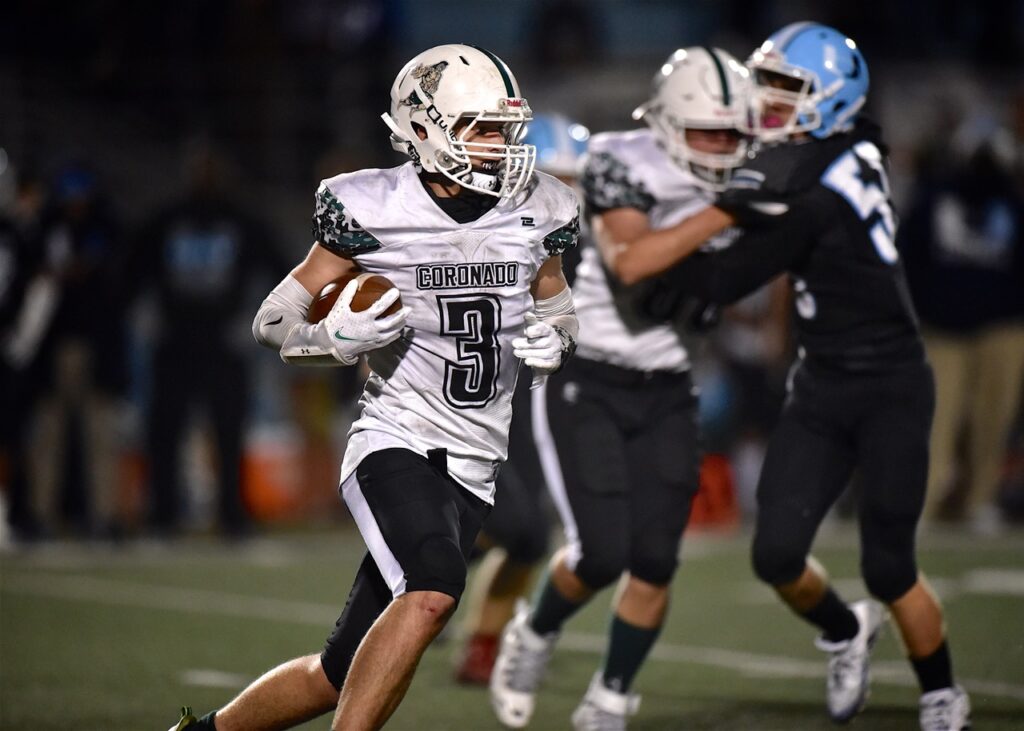 Unfortunately for the Islanders, the touchdown seemed to spark the Centurions as they ripped off 21 unanswered points to give them a 28-7 lead at the half, which could have been larger if not for a nice leaping interception at the end of the half by Bower.

During the Islanders scoring drought at the end of the half, a similar issue seemed to hinder the Islanders’ offense as the last time they played UC.

They just weren’t able to finish drives. Much like their first match-up, Coronado was able to work the ball up the field, but when they crossed the 50, their drives just seemed to stall.

Sadly for the Islanders, the momentum that UC found late in the second quarter carried over to the second half as UC would score another three times making it a 42-7 game.

Again, Coronado had their moments and moved the ball in the second half, like a deep connection from Herber to Gunnar Tonkin and some nice runs by Delcore and Steven Davis. But they proved to be just sparks, as the Islanders offense just seemed unable to find its footing.

Before time ran out for the Islanders, they did add one more highlight to the 2021 season. With just 16 seconds left, Zane Declore, as he has done all season long, busted off a 34 yard TD run to make it a 49-13 game. Instead of kicking the extra point, the Islanders went for two — Herber threw a fade to the back pylon where Finley Alexander made a great contested catch — making it 49-15 final.

It was a tough way for the 2021 season to end, but a successful one nonetheless, as a CIF Semi-final is never something to take lightly.