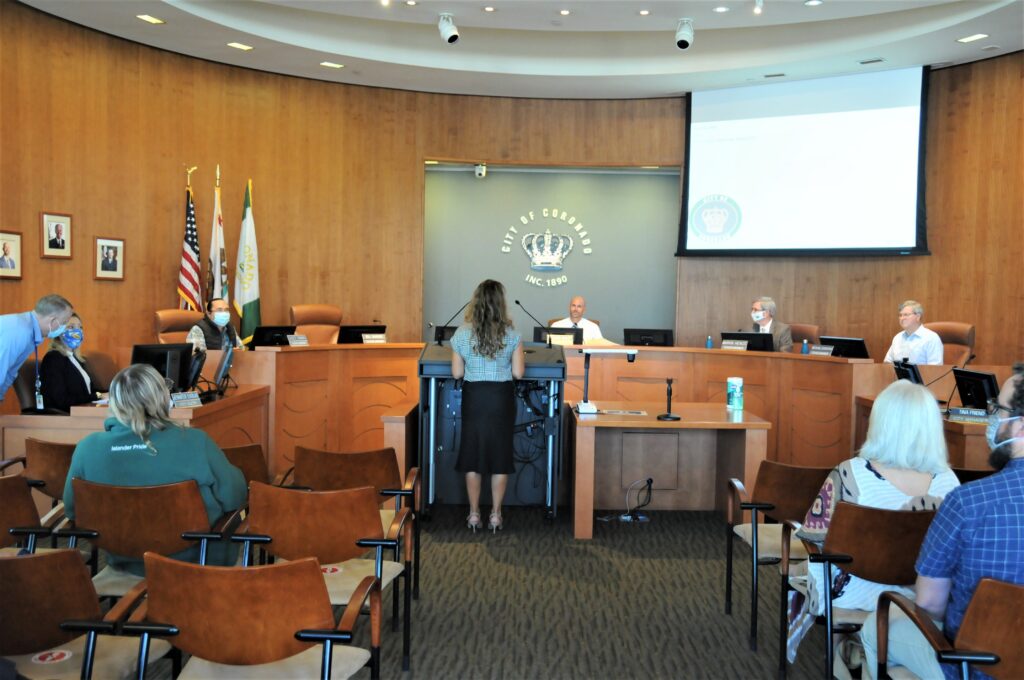 The October 5 City Council meeting was attended by all councilmembers, with Councilmember Sandke participating via zoom from France. Mayor Bailey read a proclamation proclaiming October 4 through October 8 as “Rideshare Week 2021.” Erika Saari, consultant for SANDAG and iCommute, was there to accept the proclamation. This week celebrates alternative commute choices and encourages employer and commuter participation. The City of Coronado has been recognized as a Gold Tier Diamond Award recipient for excellence in commute programs by SANDAG iCommute.

Coronado Fire Chief Mike Blood was on hand to accept a proclamation for “Fire Prevention Week,” which is October 3 through October 9. The theme is “Learn the sounds of fire safety,” which emphasizes recognizing the different sounds smoke and carbon monoxide alarms emit, and what action to take when an alarm sounds.

New City Manager Tina Friend reported that the city is carefully tracking the Huntington Beach oil spill, but it is not expected to reach the Coronado shoreline. She commended the Fire and Police Departments for their effective communication and team effort on the storm response this week, which included flooding, power outages, and fires caused by lightning strikes. She also noted that the Police and Fire Departments are wearing special pink badges, in honor of breast cancer awareness in October.

Board President Teresa Leighty and Operations Manager Mikaela Boudreau of PAWS of Coronado gave an update on the Animal Care Facility that Mayor Bailey called “one of the most successful public and private collaborations.”  COVID has had a substantial impact on their numbers, and they have seen an outbreak of leptospirosis, a bacterial infection among dogs and now provide a mandatory vaccine. 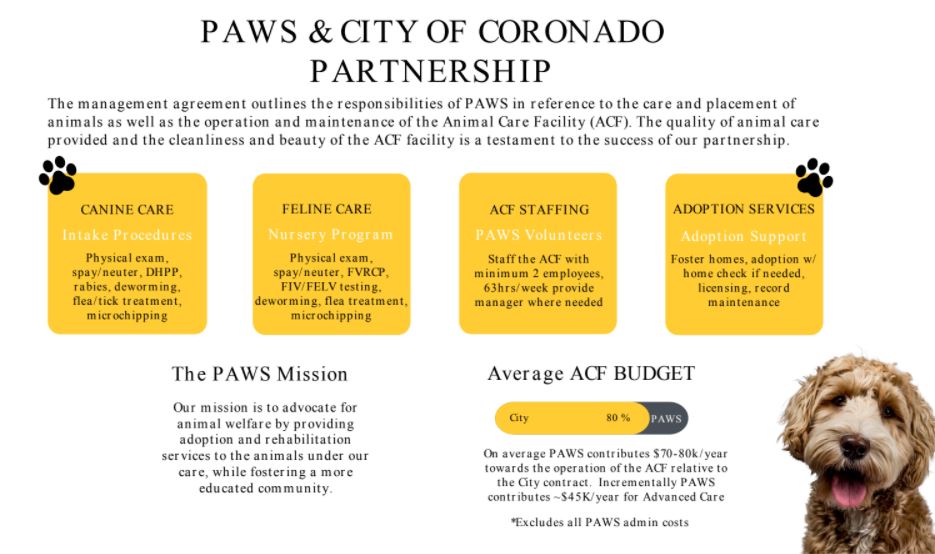 PAWS offers an array of services including canine care, a growing kitten nursery and feline care, and adoption services. They reported that 226 animals were taken into care and adopted or transferred, with 69 percent requiring more than standard intake care. Only 30 percent of animals are adopted by Coronado residents. The adoption breakdown was 136 cats, 74 dogs, and three rabbits. They also returned 98 Coronado pets to their owners. The staff regularly treats infectious diseases, traumatic injuries, starvation, cancer, dental disease, genetic disorders, and behavioral issues, all of which impact their costs. 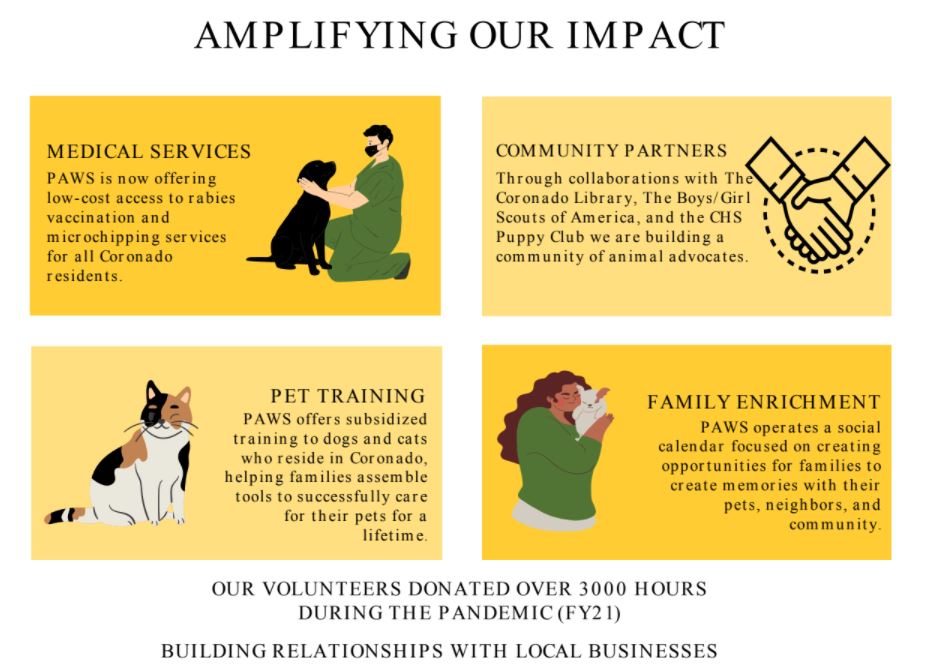 Vaccine clinics have started, and PAWS is looking forward to more family enrichment opportunities, with social activities like the upcoming Halloween Costume Contest, partnerships with McP’s Irish Pub and Wag’N Tails, and the CHS Puppy Club. Leighty highlighted that the board has been working on strategic planning, with plans to increase surgical capabilities at the facility, so they don’t have to outsource as many procedures, saving time and money, continuing to improve quality of animal life, and more community education. The council unanimously voted to receive this 2021 report, with the Mayor encouraging them to bring back their business expansion proposals for council approval.

Associate Planner and Historic Resource Commission (HRC) Liaison Tricia Olsen gave an overview of the eight properties under consideration for Mills Act Designation. The properties were: 745 A Avenue, 455 B Avenue, 1024 Encino Row, 770 F Avenue, 735 Guadalupe Avenue, 1135 Loma Avenue, 1901 Monterey Avenue, and 1101 Star Park Circle. The estimated first year impact of these designations is $24,718, with the homeowners receiving tax benefits starting next year, and 10 years to make any recommended changes. There was a discussion among the council regarding the staff recommendation to restore the front porch to the original red stamped concrete at 735 Guadalupe, which the HRC did not stipulate. The council voted to unanimously approve all the Mills Act applications and sided with the HRC recommendation to not require the restoration of the porch at the home on Guadalupe. 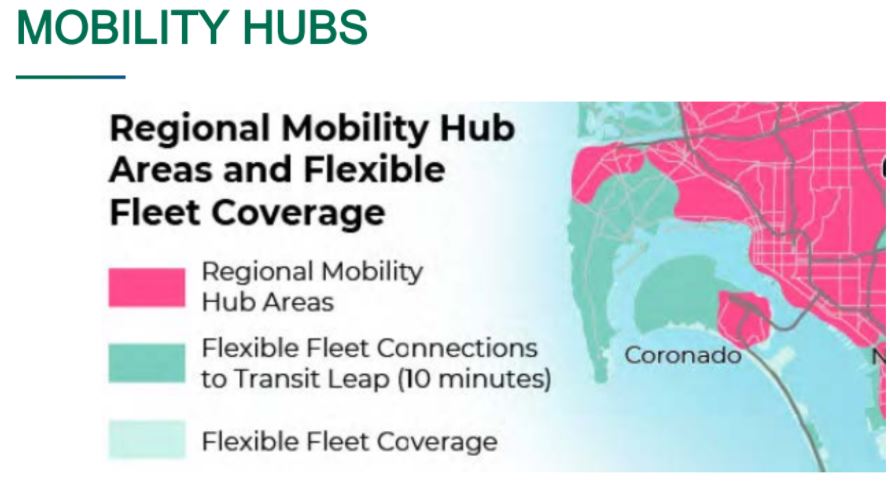 Senior Planner Jesse Brown gave a brief overview of the proposed response letter to SANDAG on the 2021 Regional Plan Draft Environmental Impact Report (EIR). He noted that one of the main concerns is the proposed Mobility Hub in the village. The letter asked for it to be removed and provides analysis on water supply and demand in Coronado and Imperial Beach, it updates language related to the city’s Climate Action Plan (CAP) efforts and maps related to the Bayshore Bikeway and multi-family zoned properties.  Councilmembers noted the Mobility Hub was based on military jobs and should be located on the Navy base, if anywhere in Coronado, and suggested pushing for face to face meetings, because letters don’t seem to be taken seriously. Councilmember Donovan commented “What else can we do to creativity hammer this home?” Councilmember Tanaka suggested creating a resolution as the most forceful thing that can be done.  Ultimately, the council voted unanimously to send the letter and directed staff to bring back a resolution for council approval.

Senior Management Analyst Kelly Purvis gave a presentation of “The Knot” bronze sculpture, by Jim Wood, being donated by the Wood Family Trust. Three potential sites were evaluated, with the proposed location in Glorietta Bay Park Promenade, which is near an area where many couples tie “the knot” in marriage. Councilmember Tanaka expressed support of the gift but not the location, saying he would agree if the other councilmembers were in favor of it, and in the end, they unanimously agreed to have it installed at the proposed location.

The 2021 Free Summer Shuttle (FSS), MTS 904 from the Coronado Ferry Landing and Coronado City Hall ran from June 6 through September 6 and carried 54,223 passengers, an average of six passengers per trip. Taking into consideration the effects of the COVID-19 pandemic and the state re-opening on June 15, 2021, ridership numbers this year were the lowest since the FSS began in 2013. The busiest days this year were July 3, with 506 passengers, and July 4, with 1,170 passengers, a 72% reduction from 2019. The city has operated a shuttle during the Fourth of July for Coronado Cays residents since 2014. In 2021, a total of 880 riders used the service, which is comparable to an average year. In 2019, the Cays Fourth of July shuttle only ran on July 4 with 557 passengers. This year, there were two days of free shuttle service to the Cays. Total passengers on July 3, the day of the parade, was 516. On Sunday, July 4, there were 364. The total cost for the 2021 FSS program was $166,686.99.

Glen Crawford was appointed to the Civil Service Commission to serve the remainder of the term expiring December 31, 2023.

Paul Schutz was appointed to the Cultural Arts Commission to serve the remainder of a term expiring December 31, 2022.

The Mid-Year Budget review was approved on the Consent Calendar. The General Fund Overview is based on interim results, with financial operations for the year within budget estimates, with revenues lower than projections by $106,714 or -0.2%, and expenditures below estimates by $507,079 or 0.9%. The combined impact of lower revenue and expenditures is an increase in reserves by $400,365, which will result in an ending fund balance of $52,519,071. Staff recommended deferring the assignment of the reserve increase. Property taxes continue to be the largest revenue source. Together with transient occupancy and sales taxes, these three tax revenues comprise 86.2% of the city’s fiscal year 2020-21 revenue.