Jim Lydon retired as Coronado Fire Chief in June, opening up his calendar to take part in the 2021 Ride for America. This event is a 3,000 mile, 40 day, fundraising bicycle ride from Los Angeles to New York for the 20th Anniversary of September 11, 2001.

A ride that brings awareness to fire fighting related illnesses strikes close to home for Jim, who was diagnosed with cancer in 2019. Jim shares that fire fighting illnesses have long been a known issue. “It started in the 1980s, people died of a cancer a few years after retiring [from fire fighting].” Now, “the last decade, fifteen years, discussion about awareness and prevention has been significant. In the fire house we had fire trucks in the building we lived in. Now we use exhaust systems to remove the vehicle exhaust.” While systems and gear has improved over the years, Jim points out that attitude has also changed. “It wasn’t macho anymore to have dirty clothing- it was a risk.”

After a childhood full of mountain biking, Jim took a pause to focus on his career. “I picked it up again a few years ago, but got into road riding. I did a century bike ride, 100 miles, in Palm Springs. Then I stumbled upon Fire Velo, riding to bring awareness to the cancer issue in fire service, mental wellness, and disabled veterans.”

After his cancer diagnosis, Jim shares, “It sparked a desire in me to be more engaged. I was going to do their annual ride from San Francisco to Santa Monica and then COVID happened; I was deflated. I wanted to show that even during cancer, I could do that.” A buddy of Jim’s reached out to him and said the two of them could still do it without all the fanfare, having their wives as their support system. A week after Jim and his friend finished the ride, Jim began radiation. 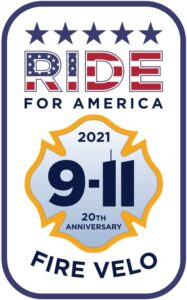 2021 Ride for America kicks off Sunday, August 1st, 2021 at the Santa Monica Pier. Fifteen active and retired fire service cyclists will be riding through 14 states and stopping at numerous fire departments and communities along the way. Riders will arrive in New York, NY on September 9th, 2021. Along the way, riders will stop and pay their respects at the Oklahoma City National Memorial, the Flight 93 National Memorial, and the National 9/11 Pentagon Memorial before they arrive at Ground Zero, the 9/11 Memorial & Museum in New York City.

The organization states, “We are riding to bring awareness to firefighter job related cancers and mental wellness of the fire service. Firefighter job related cancers have increased greatly in the past years. We are riding for the severely wounded veterans of our nation. Many of the severely wounded veterans need adapted homes to ease the everyday burdens of completing basic tasks while enduring rehabilitation to achieve normalcy. We are riding to raise funds and honoring those who sacrifice for our freedoms and safety”.

Donate to the cause or purchase a t-shirt by going to the Fire Velo website.

The Coronado Ferry has increased its ticket fee from $5 to $7 for a one way ticket, making it $14 for a roundtrip ticket...
Read more
Military

On September 11th, URT is hosting their annual WOMP contest. This is a bodysurfing competition at North Beach, near dog beach / NASNI. This...
Read more
People

"Team Tom" began with Christophe Dugan and CJ Machado. Ahead of Tom's 98th birthday in 2019, Christophe took Tom to Normandy. There, on the...
Read more
Business