The Coronado School Board met on Thursday, June 3 at 4pm at District Offices, located at 201 Sixth Street, for a scheduled board meeting. The two-hour and fifty-two minute meeting, which opened with the recognition of retiring staff members, switched gears with the bulk of the meeting centered on public comments regarding the “No Place for Hate” program, the anti-bullying initiative adopted by Coronado Unified School District.

Graduating Associated Student Body President Kelli Morris was also acknowledged for her dedication to her leadership role during the turbulent and challenging school year.  Cate Carlson will take on the role of ASB president for the 2021-2022 school year.

Morris, who will study abroad in Switzerland before attending University of Southern California, was awarded an Islander-green sweatshirt with the Switzerland abbreviation, SUI, as a tribute to her exciting future.

“I can promise you, young lady, you have seen things that none of the others have,” said Board President Lee Pontes, referring to Morris’s post during the unprecedented school year. “You’ve definitely had opportunities to learn about the real world and how things work, by sitting over there and listening to us squabble amongst ourselves.”

Again, most of the meeting centered around discussion and comments regarding the “No Place for Hate” program, even though it was not an agenda item. In her opening comments, Trustee Stacy Keszei read a letter from a concerned parent, expressing trepidation that CUSD is not focused on academics or underperforming students. The parent said that board members need to ask the important questions of any program implemented by the district, “Is [this program] teaching the students to be independent thinkers or activists?”

Trustee Whitney Antrim countered that she had taken a “deep dive” into the roots and focus of the “No Place for Hate” program, which is partnered with the Anti-Defamation League, a 501c3, and shared that she had visited each school site to examine the materials and took pictures of the pledges that were signed by students, if they wished, and displayed on posters in the classrooms. She said the materials she found were focused on kindness and inclusivity, and mentioned one in particular that was dedicated to honoring veterans.

When it comes to community questions about data necessitating the implementation of an anti-bullying program, Antrim said that, in addition to the student-led marches, the public testimony of dozens of CUSD students, and the petition signed by more than 4,500 community members demanding more equitable practices in Coronado schools, that the “Student Healthy Kids Survey,” which is posted on the CUSD website, shows that 30% of kids feel bullied at CUSD.

“That is a data point that we cannot ignore,” said Antrim. “If bullying is a problem, then we need a bullying program. And that’s what this is.”

She also said that the state mandates that CUSD schools focus on social emotional learning.

“lt’s not an option. It’s a violation of an education code if we don’t include it,” she said. “We have affirmative duties to stop bullying and to create safe spaces.” 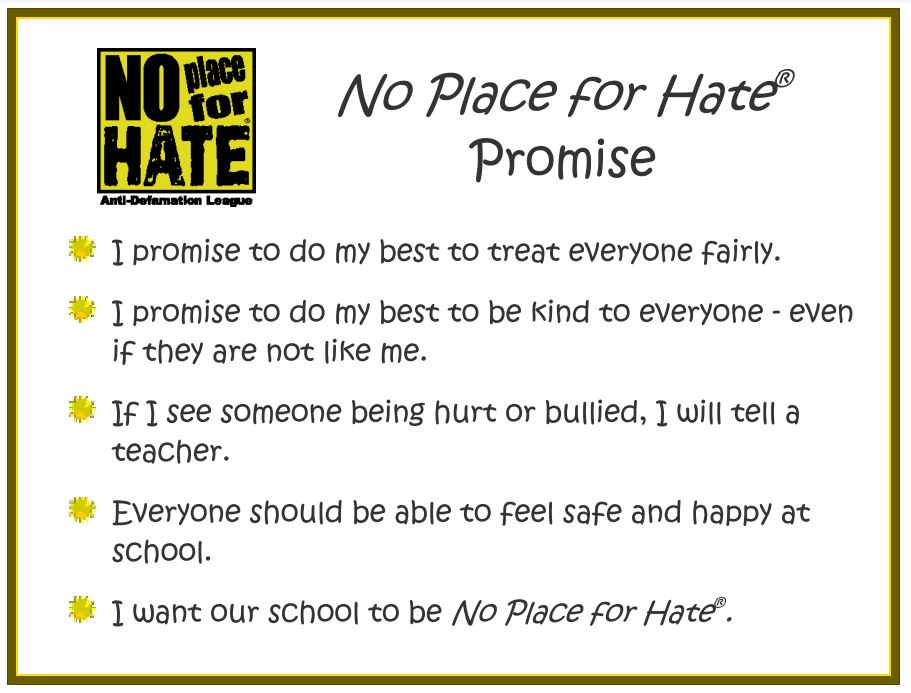 More than three dozen public comments were shared, with more than 20 community members expressing support of the “No Place for Hate” program and the equity board, while two speakers and one written public comment shared concerns.

A 1991 CUSD graduate and father of three kids in the district shared that, when he attended high school, racial slurs were “commonplace” in Coronado schools, and that “homophobia was almost expected.” Married to a Filipino woman, he said he was sensitive to issues non-white families might face.

“I think ‘No Place for Hate’ opens a dialogue,” he said. “I don’t think that people here in Coronado are bad people, but they need to think about experiences that people outside of Coronado have. As I look around, I don’t see a lot of people of other ethnicities. I think ‘No Place for Hate,’ or a program like it, is necessary for our students to be compassionate and understand what’s going on outside of their circles.”

Audrey Moore, a junior at CHS and a member of the “No Place for Hate” committee who moved to Coronado from the Virgin Islands, said she was “appalled” at the racial slurs and at the overt use of the “N” word used in the middle of the classroom by another student.

“What really surprised me was that none of the other students stepped in and told him that the words he used were wrong,” said Moore. “They laughed and made it seem even more okay.”

She said that when she saw other students speak out against their racist encounters at CHS, it made her realize that her experience was not unique. She said she welcomes conversation around gender identity, sexual orientation, racism and sexism, because “this helps students feel accepted into Coronado Schools schools.”

Four other parents, Emily Foster, Marely Ramirez, Josh Peters and Alexia Palacios-Peters also spoke in support of the “No Place for Hate” initiative.

“This isn’t a market analysis. These are human beings,” said Josh Peters, father of three kids in the district, addressing community calls for data necessitating the need for an anti-bullying program. “To those who disagree with taking possible steps to combat discrimination, I ask, what is the appropriate threshold of data to declare we have a problem? 10 cases, 20 cases, 50 cases? My position is that one incident is too many, and our work and advocacy cannot stop until we feel that every child feels welcome and a sense of belonging in our schools.”

Alexia Palacios-Peters, parent of three CUSD students, said that positive school climate is strongly linked to academic success, according to the American Psychological Association. She shared that studies show that children who are bullied are more likely to have lower academic achievement in math and reading, and higher levels of anxiety, depression, and loneliness, and are more likely to attempt suicide.

Ramirez, whose fourth-grade daughter is on the “No Place for Hate” committee, said that activities center on positivity, including the creation of “kindness cards” with messages like “thank a veteran,” “be patient,” and “be polite online.”

More than 20 written public comments expressed support of the program, with one saying, “Disbanding ‘No Place for Hate’ would send a shameful message that working towards a safe and inclusive school community is not valued in Coronado. Do not let a minority derail this work that is important to a vast majority of our community.”

Another parent wrote in, sharing that she was “shocked” to hear citizens and board members oppose the program, citing its connection to the ADL and concerns that the program could be teaching critical race theory.

“As a parent of a child who is part of the program, I can attest that these assertions are inaccurate,” she said. “In (my daughter’s) words, she said, ‘It sounds like something adults care about because they don’t know what we do. We just do things to be kind, and stuff to make school a fun place.’”

Two community members spoke out in person questioning the “No Place for Hate” initiative, Gerri Machin and Deberie Grobe. Machin shared that her family came from a school district that adopted the program years ago, and that it created an atmosphere of division and conflict.

She said the program turns kids into activists for their cause, who cannot be reasoned with. She asked that everyone work together, “and keep this peaceful village peaceful.”

Grobe questioned the use of an educational diversity consultant, and also the validity of the the Change.org petition— that garnered 4,600 signatures to date—asking if the signatures were from legitimate Coronado residents. She also raised questions about the ability of younger students to think for themselves when it came the program, and compared the implementation of the “No Place for Hate” committee and the formation of the equity committee as “gasoline on fire,” igniting a battle of parents against parents.

“I think more thinking needs to be done,” said Grobe. “There are other ideas, there are other ways. We don’t have to fight over ‘No Place for Hate.’”

In other business, Jennifer Landry from the Association of Coronado Teachers updated the board on teacher activities, including the adaption of the much-loved “Warlords of Japan” group project for students working in person and remotely. She also shared that the VAPA team created a Village VAPA Virtual Artwalk available for viewing at http://bit.ly/VAPAVillage.

The Business Services Report, which included an overview of the proposed budget for 2021-2022, was presented by Deputy Superintendent Donnie Salamanca. Of note was a projected $4 million to mitigate learning loss related to COVID, including funds to provide extended learning opportunities and programs to support the needs of learners during the 2021-2022 school year. He said CUSD is on track to become a “Basic Aid” locally-funded district on or before the 2027 school year, which means that local property taxes meet or exceed its revenue limit. He said that most of this rides on assumptions that CUSD will return to pre-pandemic enrollment levels beginning with the 2022-2023 fiscal year.

“We are closely monitoring our enrollment, and with the announcement of the planned full in-person learning our enrollment is already above our 2020-2021 COVID levels,” said Salamanca. “We are seeing at the high school level, very close to pre-pandemic enrollment, and the elementary schools where we lost the bulk of our students, we are almost halfway to recovery of pre-pandemic levels.”

He said that, if needed, CUSD will look at inter-district transfers that have served in the past to balance enrollment.

“We will keep a watchful eye on inter-district transfers, as well as our students returning that may have left during COVID,” said Salamanca

Kami McElligott, Executive Assistant to the Superintendent/Board, and Jason Ramos, Information Technology Supervisor at CUSD, also gave the board a sneak peek of the new district website that “checks all the boxes” to improve communication with parents, students and staff. McElligott shared that the website, which is set to launch June 18,  aligns with SmartPhones, and gives staff and parents multiple ways to access information.

Trustee Esther Valdes-Clayton was not present at this meeting due to an injury. The next board meeting is set for Thursday, June 17 (two board meetings in June for the Public Hearing for LCAP and Budget, according to the CUSD website.)

The Results Are In – SD County Official Election Results