CUSD Update: Teachers of the Year Honored, “No Place for Hate” and Equity Committee Cause Contentious Debate

The Coronado School Board met on Thursday, May 20th at 4pm at District Offices, located at 201 Sixth Street, for a regularly scheduled board meeting. The four-hour-long meeting, which opened on a celebratory note with the recognition of district teachers, quickly turned contentious when community members and two school board members expressed concerns in regards to the effectiveness of the equity committee and the roots of the “No Place for Hate” initiative, the anti-bullying program the district adopted in response to community and student concerns about student welfare.

The bulk of the meeting was centered on agenda item 6.3 (video below) from Student Services, which included the equity update. Several parents and community members expressed concern over the direction the equity committee was heading, as well as the “No Place for Hate” program, a partnership program of the Anti-Defamation League. The “No Place for Hate” program is used in 42 states and more than 100 schools in San Diego County to help create learning environments where students of all identities feel safe and respected, according to administrators. Of specific concern to community members were a student pledge and a discussion that invited students to select their gender pronouns.

CUSD parent Monica Piepenkotter said she joined the equity committee to “lift the educational outcome for all students” but reported that the committee is failing to address the needs of underperforming students. She said that, under the direction of the San Diego County Office of Education (SDCOE), which is contracted to help facilitate the committee, the group is hyper-focused on identity politics, gender pronouns, implicit bias, micro-aggressions, and “all of the isms,” including sexism and racism. She said the SDCOE is sharing divisive material that is subsequently pushed on all of the students, all the way down to kindergarten.

“Do we have a rampant problem at CUSD that deserves all of this urgent focus?” she asked; and later said, “The public schools don’t have a right to mandate their version of the ideal collective social identity to our children during the academic day. It’s my duty to teach our children what’s important to our family. Christian ideals, love of God, love of neighbor, respect for life, respect for goodness, charity and kindness.”

Parent Jim Fabiszak shared that he is concerned that Critical Race Theory is “sweeping across the nation” and “it must be prevented from being taught to our children in Coronado Unified.” He noted the theory separates “the oppressors from the oppressed” and shared alarm that the California education system is pushing Marxist ideals through race-based curriculums that are ultimately divisive and harmful.

“I respectfully ask that each school board member, as well as Superintendent Karl Mueller, to go on record condemning critical theory in our schools, and demonstrating commitment to eradicating all forms of [Critical Race Theory] in tax-payer funded curriculum, as well as in teacher supplemental material,” said Fabiszak.

“What is the evidence to suggest that CUSD is not a welcoming environment?” he asked. Later he said, “I believe before adopting a partisan program with multiple agendas and a checkered history of character assassination, the board should have had serious conversation with the community on the definition of hate and the hateful incidents that are apparently taking place at CUSD.” 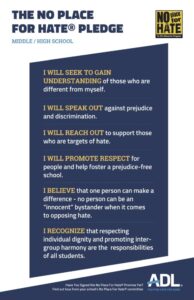 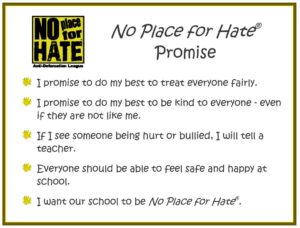 Niamh Foley, Director of Student Services shared that the “No Place for Hate” program is a holistic program that “amplifies student voice” and encourages kindness. She said the program is run by committees of parents, students, administrators and teachers at each school site. As part of the program, students were asked to sign a pledge of kindness.

Trustee Keszei expressed dismay that the program activities were taking place during the academic school day and that, by using a program that is partnered with the Anti-Defamation League, the district is ultimately using a political organization as its driver. In addition, she said that the students were asked to fill out a survey asking for preferred gender pronouns, which she found inappropriate.

“The school isn’t the third arm of the parent,” she said.

Superintendent Karl Mueller said the program helps facilitate successful implementation of the directives and mandates outlined in the California education code, and was brought to CUSD in direct response to student and community member concerns about student welfare.

“[The implementation of this program] was in direct response to our community learning that we didn’t always have positive school cultures … and that students didn’t always feel safe, valued or respected while they were in our care,” he said.

Trustee Whitney Antrim asserted that social emotional learning, upon which the program is based, is a driver for academic success, while Trustee Anderson-Cruz said that her nine-year-old granddaughter is actively involved in the program.

“What she has described to me is that it is an organization that helps children to develop kindness and thoughtfulness,” said Anderson-Cruz. “I see how happy she is in it, and she has noted that her peers appear to be kinder and more thoughtful to one another.”

Associated Student Body President Kelli Morris, who is on the “No Place for Hate” committee, said the program activities have focused on kindness and inclusivity. She said she personally knows of students who feel misunderstood in classrooms, and said it was helpful to have a discussion about gender pronouns and facilitate a platform for open conversation.

“It’s good for students to have access to this information,” she said. “I don’t think it’s over-invasive or pushy.”

Trustee Valdes-Clayton said that the program is about more than just “kindness.”

“I am seething here right now, that an administrator approved this [program] to a gullible community that had the best interests in sending our children to school to get an academic education, and they come back teaching them their pronouns, causing them confusion, and dismay, without their parental consent, or information,” said Valdes-Clayton. “I am outraged.”

Trustee Keszei questioned the efforts of the Equity Committee, and said that it was not focused on helping underperforming students, collecting data and setting goals. Superintendent Mueller said that the equity committee wasn’t designed to collect data, but rather to encourage dialogue among shareholders in response to community outcry in regards to inclusivity. This is separate from other work the district does to ensure equitable learning in CUSD schools, he said.

“The trustees that were here over the summer are well aware of the petitions and the voices we responded to, that said, ‘We need dialogue. We need a voice. We need opportunities to talk about the culture and the community on our school campuses,’” said Mueller. “And we decided to bring in voices from the community to be a part of that conversation.”

He said that the board did approve a two-year contract with SDCOE, but that they do not have the authority to change the curriculum, nor does the equity committee.

Trustee Antrim said that she valued the work of the equity committee and the conversations it generated, even if they were uncomfortable.

“This is an important moment,” she said. “It’s okay for us to feel uncomfortable. We are grownups. But no one should ever feel unsafe. I think this work is important and powerful. We are opening each other’s eyes in a way that doesn’t happen when we stay in our own separate corners.”

“It’s possible to disagree without being disagreeable, and I appreciate that,” said Anderson-Cruz.

In closing, the board directed district staff to perform a thorough vetting of the “No Place for Hate” program before school resumes in the fall.