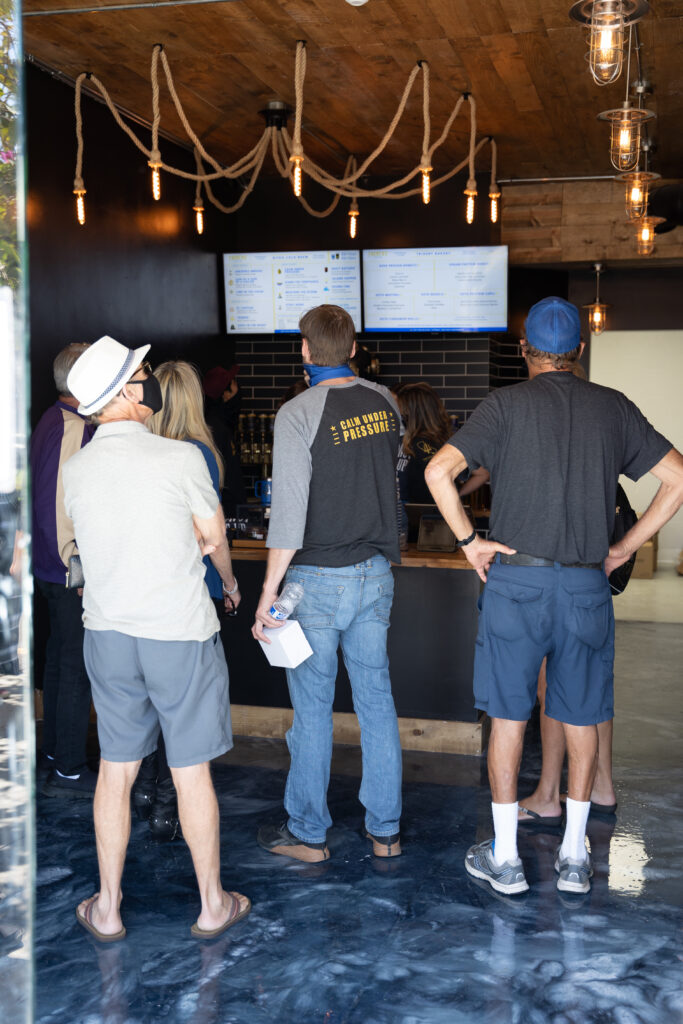 Stepping into Trident Coffee, you feel like you are in a sea ship, from the floors to the décor. It’s an impressive transformation of space from the store that used to house Yogurt Escape to Coronado TapRoom and Keto Bakery, themed after their Calm Under Pressure coffee. CEO Eric Johnson shares, “we want to experiment with our taprooms. We like being story tellers, coffee is all over the world and we want each taproom to be unique.”

Eric was born and raised in San Diego. He graduated from the Naval Academy and embarked on an eight year stint serving as a “Seabee” Officer all around the world. Speaking with him is like speaking with a friend as he lights up discussing his passion for coffee. Eric explains how he began creating the nitro coffee, the science behind the 37 degree brew, and the benefits of drinking cold coffee. (Seems to me like my habitual iced coffee consumption IS actually better for me!). Although, Eric explains, nitro cold brew isn’t the same as an iced coffee. Iced coffee is made hot and poured over ice. Nitro cold brew starts cold and remains cold.

Coronado has roughly ten coffee shops/carts already. In a saturated market, Eric took the leap knowing what he offers is different, “Coronado is one of our better markets and a storefront is a great addition. We saw an opportunity to bring our niche.” As for the Keto component, Eric shares, “I’ve followed keto for quite some time. Everything we make here I eat or drink. My dad was en route to have type 2 diabetes, keto was able to bring that down. How we treat our body impacts our health, people feel better when they focus on their health.”

Not only is the coffee brewed on site, Trident Coffee also has house-made almond and oat milk and house-made sugar free syrups using monk fruit. Eric explains that the focus is on full flavor over sweetness. In addition to the coffee, they serve house-made keto donuts. All are under 300 calories, with 2-3 net carbs, and dairy free. Vegan donuts are also available as well as specialty donuts (such as a non dairy carrot cake donut for Easter). I sampled the lemon lavender donut and a mocha latte with their house-made oat milk. Both tasted light while rich in flavor.

Trident Coffee may be relatively new to having a small walk-up storefront, but the coffee has already expanded across Southern California. You can find the specialty coffee in 7-11s, grocery outlets, and other brick and mortar locations. Cans of the coffee can be purchased in Coronado at Boney’s Bayside Market, Avenue Liquor and Wine, Park Place Liquor and Deli, and Central Liquor and Deli.

Applying the Brewery Experience to Coffee

On the move from distribution to two storefront locations, Eric says, “I grew up in San Diego and witnessed the craft brew scene grow, I wanted to do that with coffee. Most coffee shops are not collaborative. People come and go. In breweries, they comingle. Strangers come together and I want to mirror that aspect.” While this approach is different from the distribution, he shares, “all aspects feed off each other. It grows the retail, distribution, and brand.” The brews on tap certainly present the brewery feel and the multiple baristas I spoke with at the shop are all friendly and knowledgeable. Their flagship location is IB TapRoom and Brewery.

Eric admits he does not have a favorite coffee, he laughs, “I bounce between them! I like to add the MCT Oil and right now I am having a lot of the Stoic Bond dark roast.” Eric plans to have an official grand opening in May, but encourages Coronado to stop in any time to try the coffee and treats. He shares that the taproom focuses on health and wellness, encourages everyone to think differently about coffee, and reminds all that when you feel better, you act better, and you can be better.

With brewery representative positions recently popping up in the Bay Area, Southern Nevada and Arizona, Coronado Brewing Company appeared to be expanding despite the...
Read more
Community

Arguably one of the most popular New Year's resolutions is getting back into the gym. But what does that look like this year? A...
Read more
Advertisement
Sponsored Partner Links