In honor on National Library Week, April 4 to 10, Mayor Bailey issued a proclamation to Coronado Public Library Director Shaun Briley and Library Board of Trustees President Rainier Trinidad. This national celebration is sponsored by the American Library Association (ALA) and highlights the positive impact that librarians and staff have on the community providing technology, literary, educational, and cultural programs to the community. The Coronado Public Library is an integral part of the community and offers a wide array of services for residents of all ages.

With the departure of City Manager Blair King on April 29, the city has hired Ralph Andersen & Associates to recruit a new city manager. This process is expected to take 90 to 150 days with the new candidate hopefully in place this fall. In the meantime, former City Manager Mark Ochenduszko will be the interim city manager staring May 1. As the former Coronado city manager from 1999 through 2010, he is well versed on city issues to help during this transition.

Principal Engineer Ed Walton gave an in depth presentation on establishing an Underground Utility Conversion District along areas of Adella Avenue and Ynez Place. This would be the first phase in the proposed city wide undergrounding in which poles, transformers, and overhead wires would be replaced. He outlined a timeline, after working with SDG&E on the design, of February 2023. The total estimated cost would be $1.5 million, with $80,000 in estimated costs of private service laterals and $70,000 in area business contributions, leaving the city’s cost at $1.35 million. The city has earmarked $33 million for undergrounding utilities throughout the city, which they hoped to double with residents contributing up to 50 percent of costs, and previously hired Harris & Associates to help identify the most critical areas. The city has asked residents to form Benefit Assessment Districts, where residents would pay proportionally based on their benefit. First Street was one of the districts that was looked at, and funds are being sought from the Navy, who would also benefit from this project.

The lengthy discussion on this subject was started off by Design Review Commission Chairman Janice Howard who asked about the placement of transformers on the ground near her business. Former Councilmember Carrie Downey participated via Zoom and suggested that the city ask SDG&E to complete an analysis for minimal impact for businesses and residences. Councilmember Tanaka said that he needed more convincing because he didn’t think this project was “a good bang for the buck, and the fiscal impact was not worth it.” Tanaka gave an impassioned speech about how the former city councils, whose fiscal prudence had secured current finances, would not be in favor of spending the money in this manner. He pressed King about if the designated funds were restricted and discovered that they are identified for capital projects that would not have recurring costs.  Several motions came to the table, the first was to go back and ask the area property owners to contribute additional funds with a target of 50 percent. This was vetoed when King said that pre-COVID there were additional monies promised, but now that scenario has changed with the downturn in the pandemic economy. The final, unanimously approved motion was to continue this public hearing to the next council meeting on April 20. 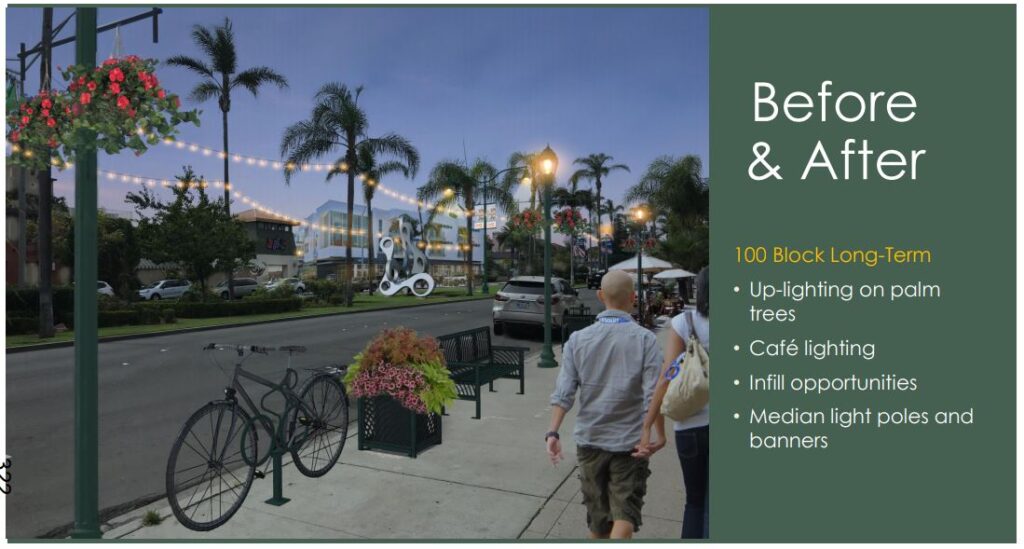 Discover Coronado Executive Director Todd Little detailed the plan they’ve funded and have been working on for the beautification of Orange Avenue to benefit residents and tourists. He introduced Jami Williams from RRM Designs, who spearheaded the project conducting stakeholder interviews and developing potential strategic short- and long-term steps to enhance the Orange Avenue corridor, while maintaining Coronado’s unique character. Common themes for improvement included improved retail quality, more mixed-use development and housing opportunities, better streetscape and pedestrian connections, and enhanced medians. For short-term improvements: unifying mismatched items like signage, bike racks, trash cans; and adding additional furniture, tree grates, and planters could be achieved for an estimated cost of $482,400 for the 12 block stretch of Orange Avenue. A rough estimate of a long-term enhancement plan including upgraded traffic signals, bulb outs, lighting and more came in at $2.6 million. 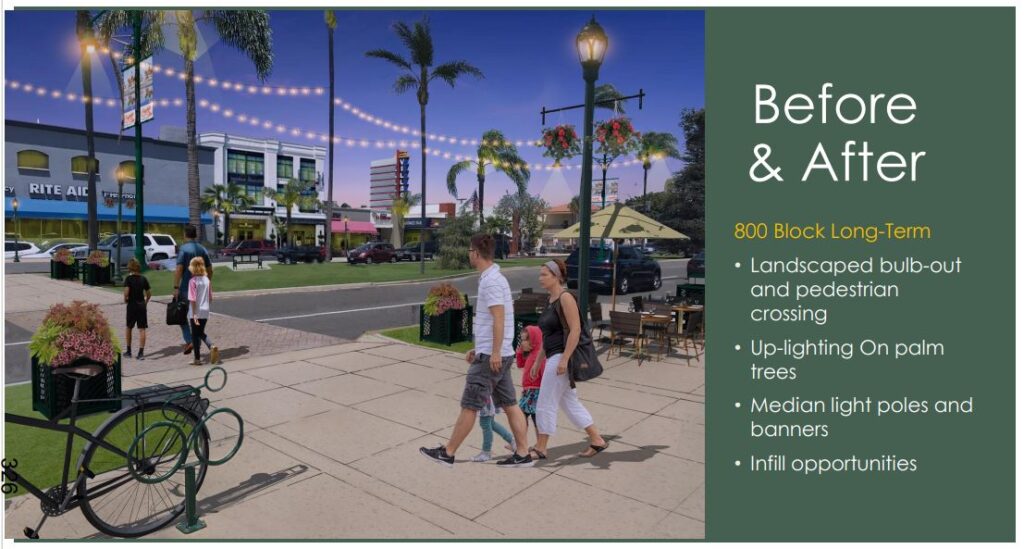 The discussion started off with Glorietta Bay Inn General Manager Claudia Ludlow expressing her support of the plan as it will be especially beneficial for guests as we come out of the pandemic. Blue Bridge Hospitality Principal David Spatafore also endorsed promoting a pedestrian-friendly village feel as people get back to going out. Chamber of Commerce Executive Director Sue Gillingham presented a survey of 17 business owners and 26 Orange Avenue storefronts which listed the top three things they’d like to see as: uniform design elements, more pedestrian crosswalks, and permanent outdoor seating. “Ninety-five percent of Orange Avenue businesses rely on tourism to survive,” she noted.

Former Councilmember Carrie Downey weighed in as pro-beautification, but said no to mixed use and decreased parking requirements. She also said that it’s time to update the Orange Avenue Corridor Specific Plan, to which everyone agreed. When the mayor proposed a motion to have staff come back with the process on how to implement these ideas, Councilmember Tanaka said that city staff is already overburdened, and the timing is off with a new city manager coming in. Councilmember Heinze pointed out that it would be impossible to move forward with the comprehensive plan without Caltrans relinquishment.  King noted that bulbouts, sidewalk dining, decor lighting, and median art were some suggested items that could not be done until relinquishment is complete. King shared that Cliff Maurer, Director of Public Services and Engineering, is making progress with the Navy’s demands on the relinquishment process, but that won’t be completed until at least 2022. The final unanimously approved motion, with Councilmember Sandke recused, was to ask staff to determine which uniform design elements are possible under current control. 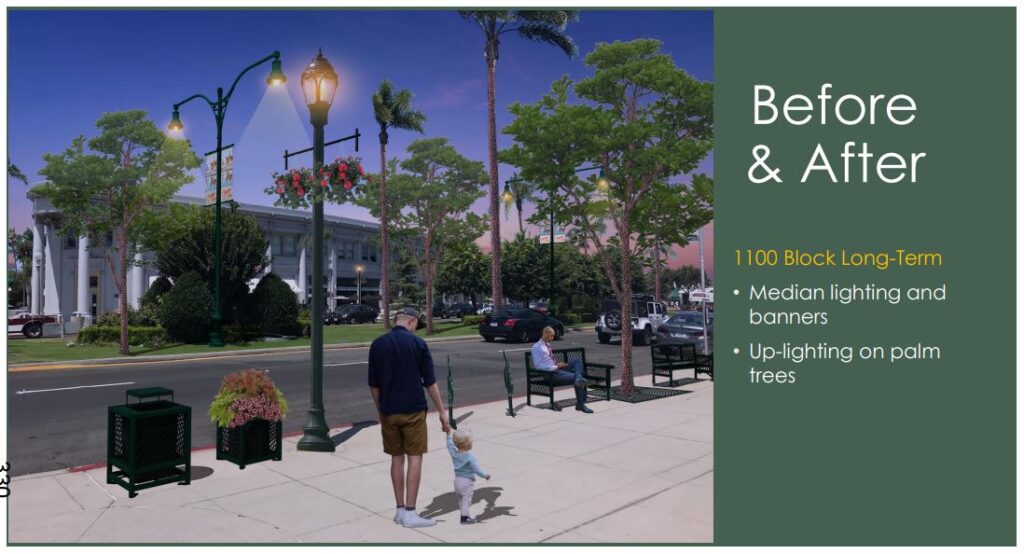 A lengthy discussion ensued regarding a proposed building project for a 12,500 square foot home on the combined lots at 6 and 8 Sixpence Way in the Cays. The issue centered around the proposed project’s 1717 square foot floor, and if it was a third story or a mezzanine. Several councilmembers pointed out that this was an unusual case, because the plans for the project at this point have only been submitted to the Cays Homeowners Association (HOA) and not the city. The project was initially denied by the HOA, based on the zoning standard that only allow for two stories or 35-feet, with third story additions not permitted in the Cays. The HOA also cited setback encroachments and shading as non-compliant. The homeowners were unable to attend via Zoom, but Ryan Dooley, their representative, outlined that the addition met the five criteria to be considered a mezzanine (and not a third story). He noted that they also sent the plans to Esgil Corporation, which the city uses for plan reviews, and they concurred with the assessment. The councilmembers agreed with Mayor Bailey when he said, “this step in the process is premature and given the lack of information, I’m inclined to ask the appellant to provide greater detail.” Ultimately, the council unanimously voted to accept the staff recommendation and denied the appeal.

The next building project discussed is taking place at 201 Ocean Drive for which building plans were approved in December 2020. Subsequently, the applicant submitted revised plans for a new internal 680 square foot ADU, a new 400 square foot carriage home, a 200 square foot den addition and a 39 square foot garage addition. Community Development Director Rich Grunow noted that the city approved the ADU, but not the carriage house, den, and garage addition, which were 593 square feet over the floor area ratio (FAR). Kent Sharp, the appellant’s representative who filed a lawsuit against the city in December, asserted that based on his interpretation of state law the ADU doesn’t limit the size of the FAR, and asked the council to approve the entire project. The mayor noted that there was a “difference in interpretation” and all the councilmembers agreed and felt the staff argument made sense and was in the best interest of the community.  Former Councilmember Carrie Downey also called in via Zoom and suggested that an ADU registry be created to ensure that laws are being followed. After an intense discussion, the council unanimously agreed with the staff recommendation to not approve the additions unrelated to the ADU.

City Manager Blair King gave special recognition to Senior Management Analyst Denise Johnson, the City Employee of the Year, for her outstanding performance in the Public Services and Engineering Department. The city recently hosted an employee recognition event at the South Bay Drive-In Theatre. Johnson commented, “It’s easy to work hard with such a great team.”

City Manager Blair King gave a brief presentation on the annual two percent increase of the TransNet tax on new residential units which was then approved.

Angelica Rocha was appointed to the Mobility Commission to serve as a member until December 31, 2023.