Eyewitness to History: A Personal Account by Lou de Beer 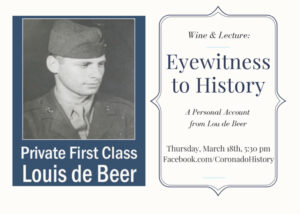 On Thursday, March 18, the Coronado Historical Association was honored to present this month’s virtual Wine & Lecture: Eyewitness to History – A Personal Account by Lou de Beer.

Resident and recipient of the Coronado Avenue of Heroes Award, Lou de Beer presented a personal account of his WWII and Korean War experiences. He shared rarely-seen period photographs and film footage of the German occupation of the Netherlands, including de Beer’s American family as hostages of the German government in concentration and internment camps in the Netherlands, Germany, and France. On the periphery of WWII and the Holocaust, his unique journey adds an important and generally overlooked angle to the history of WWII in Europe.

The son of American parents, Lodewy “Lou” de Beer was born in Amsterdam in 1931. As a boy, he witnessed German troops’ arrival in 1940 and lived through 18 months of occupation. When the United States joined the war, the de Beers were declared enemy aliens, and his father was arrested. Declared Prisoners of War (POWs), the family was separated and began a lengthy odyssey through concentration and internment camps in Holland, France, and Germany.

After the allied victory in Europe, the de Beer’s family reunited and returned to the United States. In the early 1950s, de Beer joined the Marine Corps and completed boot camp at Parris Island, South Carolina. He transferred to Camp Pendleton for infantry training and amphibious assault exercises here on Coronado beach.

In June 1952, a troopship, the USNS General Meigs sailing from San Diego, brought PFC de Beer to Korea, where he was a field radio operator/rifleman assigned to the 1st Marine Infantry division 1st regiment. Arriving in the last year of the war, he witnessed the worst when nearly 40 percent of the war-time combat casualties occurred.

After Korea, he was transferred to the second Amphibious Tractor (AMTRAC) battalion 2nd Marine Division at Camp Lejeune, North Carolina as a radio operator and machine gunner. He completed his two years of active duty and served an additional six years in the ready and inactive reserves.

After college, de Beers worked in the defense electronics industry at locations throughout the United States. During an overseas assignment, he met and married his naturalized American wife Evelyne, who also shares a history of experiencing the German invasion into her country. Later de Beer joined the National Security Agency (NSA), where he was awarded the Meritorious Civilian Service Award for his work. After traveling extensively and living in Europe, North and South Africa, and the United States, Lou and Evelyne retired and settled in Coronado.

If you missed this month’s Wine & Lecture you can find it recorded on facebook.com/CoronadoHistory. Find more information about our monthly events at CoronadoHistory.org.

She's been going to the Coronado Public Library since she was a little girl, and now Natalie Stringer is the new Coronado Children's Librarian.As...
Read more
Education

After an expedited search, the Coronado Unified School District (CUSD) announced that Karin Mellina will serve as the new Principal of Coronado High School...
Read more

By Mary Farley, CHA Volunteer & GEM Committee Chair This article is the first in a series about CHA’s Going the Extra Mile Award. The Annual...
Read more
Community News

The Coronado Historical Association is dedicated to preserving our community’s special heritage and celebrating our past, present, and future.In that spirit, every year since...
Read more
Advertisement
Sponsored Partner Links