Tune In: Ad to Air During Super Bowl Connected to Coronado Local

“It’s a bit surreal to know that much like Tom Brady, we’re headed to the Super Bowl,” Raindrop‘s CEO and Coronado resident Jacques Spitzer said. “I feel like it’s just the beginning and not the end of this journey.”

The San Diego-based creative and performance marketing agency created an ad that will be featured during the big game on February 7. The 30-second ad is for Dr. Squatch, a natural soap company that they’ve worked with for three years to create viral videos that have amassed hundreds of millions of views. Spitzer says he felt over the moon when he found out the ad was going to run during the Super Bowl.

“I felt a deep sense of pride in the fact that we had taken this business to a place where they’re probably paying more for the ad itself than they were doing in total business just three years ago,” Spitzer said. “It’s not like being asked by some huge brand to make an ad, we worked together to this moment and it may not be the last time we get to do something like this, depending on how things go.”

Dr. Squatch was previously based in San Diego as well. The company has increased its annual sales rapidly, surpassing $100 million last year. Despite this, the company is not yet a household name like many other Super Bowl advertisers, so Spitzer says the goal was to create an ad as if no one had ever heard of Dr. Squatch before.

“We really wanted to go back to the basics and do the most Squatch ad we could do and not assume that people had ever seen their ad before,” Spitzer said. “We wanted it to blow people’s hair back a little bit.”

In the past, Raindrop has used humor extensively for their ads with Dr. Squatch and Spitzer says this one does the same.

“The ad cannot be ignored,” Spitzer said. “I feel like if you’re gonna go big, swing for the fence. We went big, there’s no doubt about it. It’s very in your face, it’s fun, and maybe for some people shocking. It’s going to truly be an ad that when it ends, people will be talking about it.” 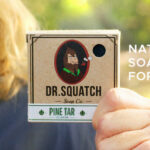 For anyone who has seen a Dr. Squatch ad before, this one will have some familiar faces.

“James Schrader and Mike Langsdale are featured in the ad, and they’re fantastic,” Spitzer said. “People really gravitate towards them.”

Safety restrictions during the coronavirus pandemic added an extra challenge to shooting the ad, but Spitzer says the team went through strict protocols to make it possible.

“There’s 15 to 20 people that go into making a spot like this and it’s cool to see how every aspect matters for a spot like this,” Spitzer said. “There’s such a microscope under every second and literally every frame of that ad. It all matters and it took a lot of people to make something look simple.”

You can watch the ad ahead of the Super Bowl on YouTube. You can also take a look behind the scenes:

Earlier this week, Coronado's Alisa Kerr was enjoying the view from her Coronado Shore's condo, when she spotted a shark swimming near a surfer....
Read more
People

Moderna and Pfizer BioNTech vaccines are in full swing at the Sharp Hospital & City of Coronado Vaccine Clinic, and at some point the...
Read more

The 2021 Coronado Community Read centers around a nonfiction book about racism in the United States titled Stamped from the Beginning by Ibram X....
Read more
City of Coronado

The City of Coronado is partnering with CSU Long Beach’s shark lab to learn more about the local shark population. This comes after an...
Read more
Business