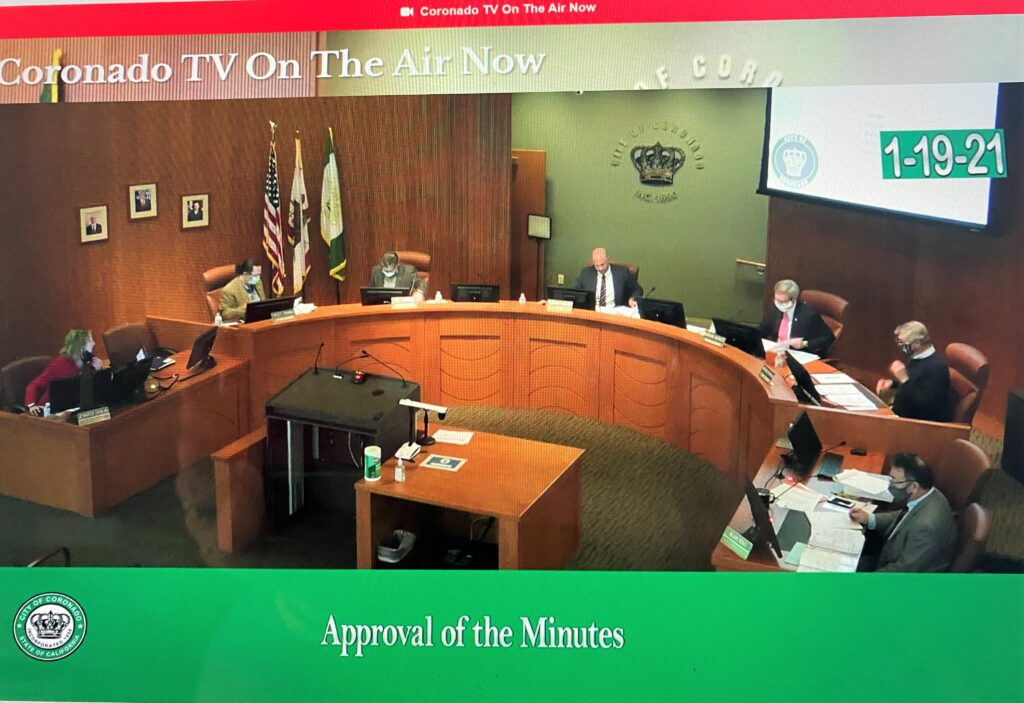 The Ocean Blvd enhancement project has garnered an outpouring of public opinion. For the council meeting on January 19, 28 community comment letters were received and four people calling in to the meeting. Opinions range from those who prefer leaving the area as is to those who favor a moderate approach to some who envision an expansive boardwalk.

Ultimately, passing 4 to 1, with Councilmember Tanaka the single vote, council voted to move forward in redesigning a modified version of the Ocean Blvd Street Improvements Project that will maintain a minimum of 11-feet for automobile lanes on Ocean Blvd. Where sidewalk widths are eight feet or less, furniture and streetlights on the sidewalks will be relocated from the street side to the rock side. This project will also include delayed maintenance on the Ocean Blvd roadway. Active Transportation Plan (ATP) items will be addressed, including upgrading the ramps to be ADA compliant. There was discussion about potentially red curbing areas, to not allow parking at the narrowest part by Sunset Park, to help with congestion, but that was deemed difficult due to Coastal Commission regulations.

Council saw this as a potential compromise to increase accessibility for wheelchairs, strollers, and walkers. They agreed that bikes, including surrey bikes, should be designated to ride on the street, not sidewalks. Principal Engineer Jim Newton outlined the preliminary nearly $2 million budget for the project with $1 million in asphalt work, $600,000 in sidewalk repair, and $100,000 plus for the relocation of furniture and light fixtures.

Councilmember Tanaka pointed out that in the staff report, the existing sidewalk ranged from 8.25 feet down to less than 6.25 feet with the narrowest part located on the three blocks at the north end where the rocks begin by Sunset Park. He was adamant about residents not wanting to take two feet from the street or rocks to enlarge the sidewalk. He said that since it was undefined at this point how much of Ocean Blvd would get narrower, he could not get behind this version of the project. He also commented that potential more extensive future projects could be looked at and put on the ballot for residents to vote on. The project will be brought back to the council again for final review and bid authorization.

Restaurants have been hit hard during the pandemic and it’s been like a roller coaster as they navigate through the mandated safety precautions. Restaurants in Coronado have taken a variety of approaches, especially now in the purple tier and with the Southern California region stay home order, with some closing completely, others offering take-out, pick up or delivery only with food consumed offsite, and still others offering to-go food and allowing patrons to stay on-site and dine at tables in their outdoor spaces.

To this end, the council considered a proposition that would penalize restaurants who are currently not abiding by county health regulations (which dictate that they not provide tables and chairs, indoors or out), by not allowing them to set up special sidewalk dining areas when we return to the less restrictive red tier.

Pete Joseph, owner of McP’s Irish Pub, called in to say that the County Health Department inspected his Coronado establishment on January 8, and said it was in compliance and that protocol dictated that he would have two to three additional visits. The County Safe Reopening Compliance Team and two San Diego Sheriff officers returned a week later and again said that they were in compliance. Joseph also said that Miguel’s Cocina has also had a similar experience. Council seemed surprised by this, as the health order clearly prohibits guests from gathering on restaurant patios, and many restaurants are following this rule. Ultimately, the council felt that they wanted businesses to succeed and would not put a penalty in place, and that it was best to leave enforcement to the County Health Department.

Three representatives from Best, Best & Krieger, LLP, — Andre Monette, Ana Schwab, and Lowry Crook — gave a Federal Advocacy Update. Monette gave an overview of the Tijuana River Sewage System, highlighting that the $300 million allocated to fix the problem comes with the conditions that it must be used for infrastructure on the U.S. side and the EPA wants to see this as a final solution.

Short term projects that are being considered: a small, temporary river diversion to the International Treatment Plant (ITP), San Diego South Bay Water Reclamation Plant (WRP), and Point Loma Wastewater Treatment Plant (WTP); increase treatment of sewage from Tijuana to the three above locations; and a sediment and trash control basin at Smugglers Gulch. He said that short term projects should be started in 2021 with 10 long-term projects also under consideration taking longer to determine and implement (see chart for project details): 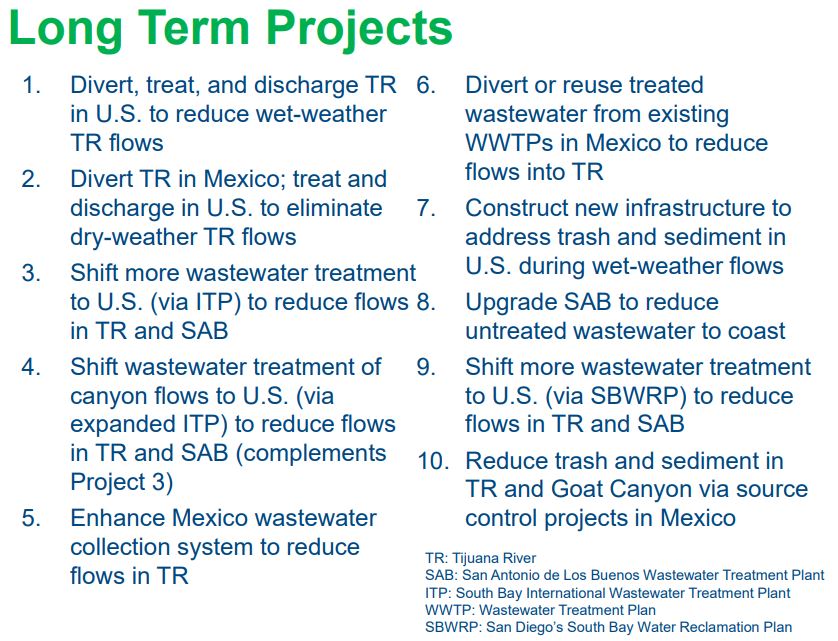 Crook talked about the new COVID-relief money coming as President Joe Biden takes office, noting that $350 billion has been allocated for state and local governments, with $27 billion designated for cities with populations under 50,000. The American Relief Bill will also include a tax credit for federal and medical leave. Schwab discussed new tax and economic changes amidst the new government dynamics and the need to keep the TRV sewage issue a bi-partisan issue to continue to propel solution forward.

Police Chief Chuck Kaye gave a presentation on traffic enforcement activity sharing that the emphasis has been on speed enforcement and noise violations per residents’ concerns.  He said that speed was the number one contributing factor in collisions and 1,262 citations were given for speeding from July through December 2020, as compared to 683 in that time frame in 2019. The number of accidents was down from 56 in the last half of 2019 compared to 44 in that time in 2020. He said that officers placed 11 homeless individuals in the shelter bed secured by the city at St. Vincent de Paul in downtown San Diego. City Manager Blair King said having the available bed helps provide humane accommodations and helps with enforcement.

Kaye also said that the police fleet number would stay the same, with the city authorizing the purchase of two new police BMW motorcycles to replace two older Honda motorcycles. He noted that it will be easier for officers to all have the same model to train on and use on the job.

There were two Public Hearings on which the council voted. The first was a resolution to close the previous public hearing that recommended finding Demcon Concrete in default of the City Hall and Community Center HVAC water line replacement project. Principal Engineer Ed Walton said that the staff now recommends not finding fault with Demcon as they have been responsive, and allowing them to finish the project, which is slated to be finished by the end of the month. Councilmember Sandke commended staff for resolving this issue and keeping it out of court.

The second was presented by Senior Planner Jesse Brown regarding the California American Water Strand water main replacement project. He noted that the initial study has been prepared, and the areas identified where impacts are significant without mitigation including biological resources, cultural resources, and construction noise. The council unanimously approved the staff recommendation to prepare a Mitigated Negative Declaration (MND) to satisfy CEQA requirements. There will be a 30-day public review period and the MND will come back with a coastal permit application for final approval.  Councilmember Heinze pointed out the need to address traffic access for the Cays and Loews Coronado Bay Resort entrance during this construction.

Director of Community Development Rich Grunow gave a presentation on reviewing the residential developmental standards for Coronado. He showed that citizen satisfaction surveys indicate that residents want to maintain the small-town atmosphere and village charm and there are concerns with bulk, scale, and mass in single-family neighborhoods. Recently passed State Legislative Actions are making this harder to preserve. Grunow said opportunistic applicants are trying to apply expansive interpretations of the new Accessory Dwelling Unit (ADU) laws and offered five options that staff put together for council consideration. There was discussion on an option that would include a policy in the Housing Element to allow increased Floor Area Ratio (FAR) if property owner deed restricts new ADUs for rent by lower income households. The council felt that would be hard to enforce and unanimously approved a motion that directed staff to amend the current ordinance, to clarify that ADU square footage must be included in FAR calculations, and that new single-family residence (SFR) development with ADUs must comply with FAR.

Out of a pool of three applicants, the Council appointed Tillie Vuksich as a member of the Cultural Arts Commission (CAC), to fill an unscheduled vacancy through December 31, 2021. Mayor Bailey thanked the candidates for their willingness to serve and said that the CAC has just had another vacancy and they will have another opportunity to apply.

The final two agenda items, report on the on-demand electric transportation service and the quarterly tasks and projects progress reports was continued to the next council meeting.

The City of Coronado was named Emerald Keeper of the Month by President Amy Steward, along with Board Members Ginger Cox and Christina Slentz...
Read more

Let’s talk burgers! Everyone has a favorite, but now there’s a fresh, new burger option in town to try with some truffle fries and...
Read more
Advertisement
Sponsored Partner Links