This morning, some Coronado residents found unwanted signs on their lawns with the text “Racism Lives Here” followed by “Make America Great Again!” The signs are similar in format to the Trump-Pence 2020 yard signs.

According to Coronado Police Department spokesperson Lea Corbin, the signs were in the yards of homes where Trump flags or Trump signs were on the property. By late afternoon the dispatch center had received seven calls for service, and officers responded and spoke to each of the residents that had called in. CPD is in the process of collecting camera footage from a few of the homes and is working to identify the person or people who left the signs.

While stealing a political sign is a petty theft, “simply placing a sign in another’s yard, may be unwanted, but not a crime,” said Corbin.

Officers will be out and about patrolling and will continue to monitor the situation.

Regulations on signs, including political signs, in Coronado can be found here. 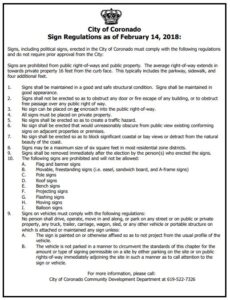 Community Grants and Housing Element options were among the critical topics discussed at the June 15, 2021 city council meeting, which started with Mayor...
Read more
Community News

Just in time for Father's Day Weekend, the public pianos are rolling out. You'll find them at Rotary Plaza, Adella Plaza, and a new...
Read more