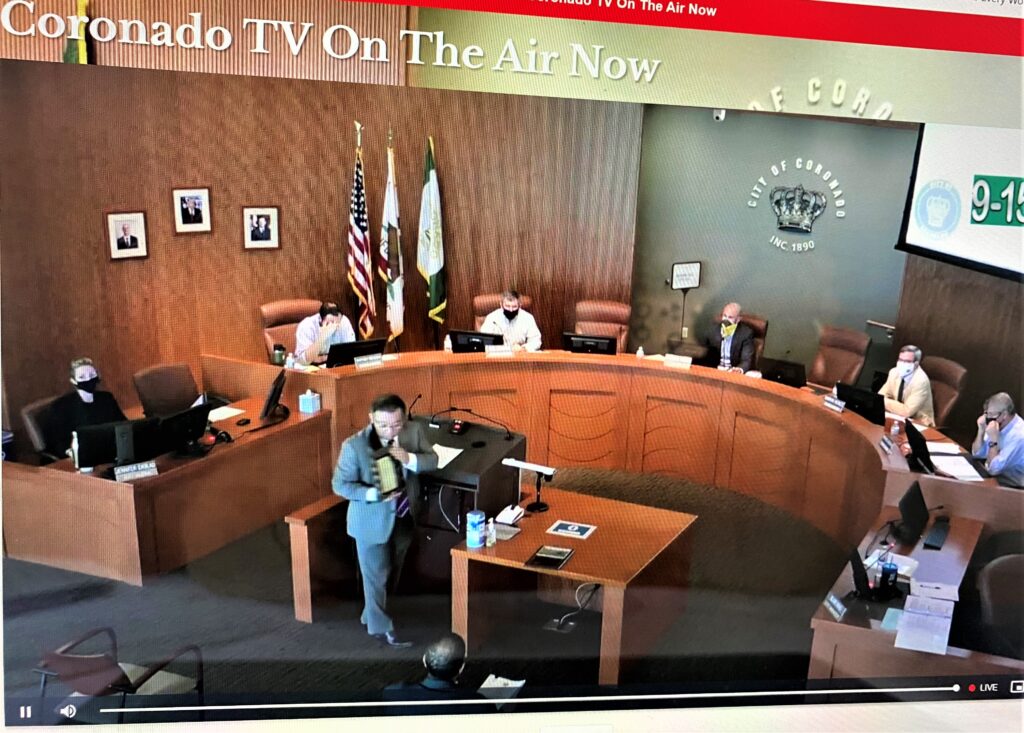 For the first time in months, the City Council began its September 15 meeting with a ceremonial presentation to proclaim “Arts in Education Week” September 13 to 19, 2020. Mayor Richard Bailey presented the proclamation to Kelly Purvis, Sr. Management Analyst/Arts and Culture, who said, “Not even a pandemic can stop the arts.

Art has helped us survive this.” The proclamation emphasized that the arts are an essential part of a well-rounded education and are a vital part of our community. Purvis encouraged the community to check out the Coronado Arts website https://coronadoarts.com/.

City Manager Blair King highlighted that the city is the midst of awards season, having recently received three honors. The first was an award from the Government Finance Officers Association (GFOA), which covers the U.S. and Canada, for excellence for financial reporting. King acknowledged the outstanding work of Director of Administrative Services Jim Krueger and his staff. The second award was Project of the Year for the Transbay Pump Station by the San Diego Chapter of the American Public Works Association (APWA). “This was called out as an example of an outstanding public works project,” said King who congratulated the Director of Engineering and Director of Public Services and Engineering, Cliff Maurer, and their team. The third accolade was a Gold Beacon Award for sustainability best practices from the Institute for Local Government (IOG). King pointed out that last year, the city received a silver award and was upgraded this year for the city’s totality of best environmental practices.

The council unanimously approved a motion to continue the extension of temporary accommodations provided to restaurants for public rights of way usage and local fitness-based businesses for the use of parks and beaches until San Diego County achieves the Tier Three (orange) status for reopening. The council will revisit this issue when the status changes. King gave a presentation commenting that they have received some complaints with regards to safety and crowding. All councilmembers joined in the discussion an acknowledged that Coronado MainStreet is helping with enforcement and educating businesses.

King said that a letter has gone out to restaurants asking them to place outside dining on one side of the sidewalk only (along the front of the business or near the curb, but not both); and not to use “no parking” signs or cones to prevent parking in front of businesses. The city had made the offer to businesses to work with them regarding additional outdoor parking lot dining options. This is more difficult on Orange Avenue, because it is controlled by Caltrans, but other streets, such as A, B, and C Avenues offer more flexibility. Councilmember Benzian said, “It’s time to jump in and be entrepreneurial and creative to help businesses,” with the council agreeing, and Councilmember Heinze suggesting that “it’s a delicate balance to make pedestrians and diners feel safe.”

Councilmembers Heinze and Donovan reported that they attended the Airport Authority Board meeting and Coronado was granted an extension until October 1 to review and comment on the final environmental impact report (EIR) for the Airport Land Use Compatibility Plan (ALCUP).