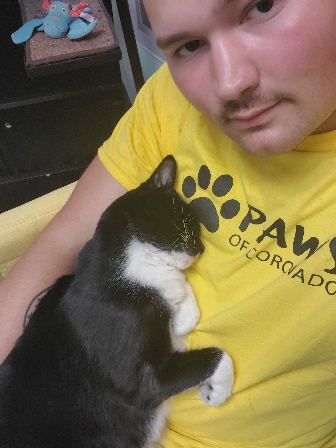 At the end of his workday, Austin Burks enjoys coming home to a sweet, mellow cat that he first got to know at the Coronado Animal Care Facility. Burks knows he changed the life of the 8-year-old Tuxedo cat he adopted in late 2019 but Sox also changed his.

Burks became attached to Sox after signing up to be a cat petter while he lived in Coronado. He was in the Navy stationed at Naval Air Station North Island aboard the USS O’Kane. He has since moved to San Antonio, Texas, but while here he developed an attachment to Sox.

“I adopted Sox because he was there the whole time since I had started volunteering and he’s a big cuddly baby,” Burks said.

This Coronado Pet Adoption Story is the first in an occasional series highlighting the pets and their adopters after they leave the Coronado Animal Care Facility. Burks graciously agreed to share his and Sox’s story.

Katie Hunt, a staff member in charge of volunteering at PAWS of Coronado, said cat petters are key to the operation of the City facility because they help socialize the felines so they are ready to be adopted. PAWS is a nonprofit organization that started managing and operating the Animal Care Facility in 2014 through a special agreement that benefits both the City and PAWS.

Volunteers come to the Animal Care Facility up to twice a week in the morning or afternoon and spend about an hour of quality time with the cats. They pet, cuddle and talk to the cats. Due to the pandemic, the facility has not been able to use its usual cat petters due to public health concerns as many are at-risk seniors who give their free time to help out.

Burks, who is 22, first met Sox when they both arrived at the Animal Care Facility around June of 2019. Sox had been recently returned by a family who had adopted him but could no longer care for him. By November, Burks said he knew Sox was special and that he was ready to make things official and permanent.

“When I first adopted Sox, the whole ride home he was yelling and meowing really loud,” Burks recalled. “When we got home and I let him out of the carrier, he ran straight under the couch and hid. It took him a little while to realize that he was finally home and that he had a whole new house full of adventure waiting for him.” 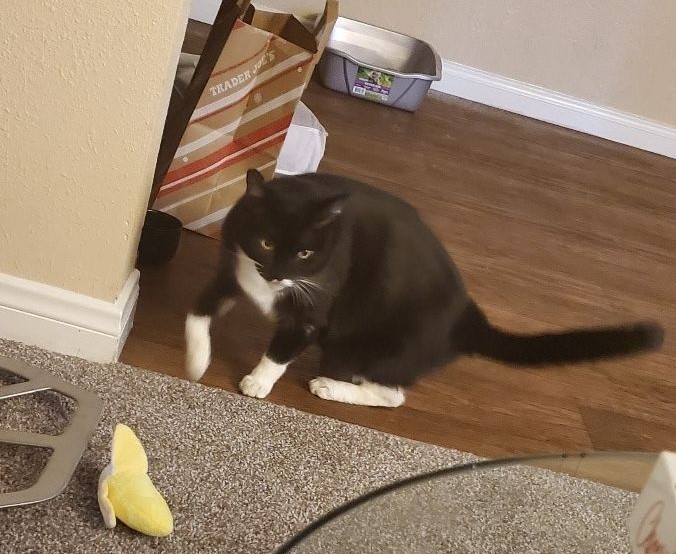 After a short adjustment period, which is common for newly adopted animals, Sox came out of his shell and began to love life with Burks. Sox always waits at the front door, looking out for Burks to come home no matter how late. The two are now best friends.

Burks said he noticed that he himself was starting to interact more with people at work. He was sharing stories with co-workers who knew he had adopted Sox and wanted to know how the cat was doing.

“Talking to people about Sox always makes me think of something that he has done within the past few days so it gives me a story to tell,” Burks said.

Karen Dwinell, medical director at PAWS, said the entire staff at the Animal Care Facility came to know Burks, who had no family in California when he began volunteering as a dog walker. He found he also had time to be a cat petter too. That’s how he got to know Sox.

“Since Austin lived aboard a ship, he couldn’t have pets,” Dwinell said. “He asked if he found an apartment, would he be able to adopt Sox. The answer was yes and he did find an apartment. The mother hens at the Animal Care Facility helped him furnish his new place, and once he was settled in, Sox went home with him.”

Hunt said Sox and other adopted animals reveal the power of animals to lift their adopters up. Slowly and quietly, an animal will change the life of its adopter, maybe before the person even realizes it and, before you know it, the rescue animal becomes the thing you look forward to at the end of the day, she added.

“That friendship is something truly powerful,” Hunt said. “Every time I see the golden seal of ‘adopted’ go onto an animal’s file, I know that a gentle, subtle and often silent force has begun its work. Somewhere out there, at least one animal and at least one human being will never be the same again.”

We found this in our archives and thought we'd check in to see what the results look like four years later.This below is from...
Read more
City of Coronado

Editor’s Note: Thank you to the Coronado Shores Community Alliance Group for conducting this virtual Q&A forum and for sharing their video with the...
Read more
Letters to the Editor

Submitted by Brad GerbelLast week, I spent the afternoon at the San Diego County Registrar of Voters (“ROV”) office in Kearny Mesa as an...
Read more
Letters to the Editor

Submitted by J. Fitzgerald KemmettWe would all think the world is coming to an end with the number of Covid-19 cases and deaths dominating...
Read more
Letters to the Editor

Submitted by Sherry Hughes RichterI'm writing in support of Nick Kato for Coronado School Board. As a product of Coronado schools and a member of a...
Read more
Advertisement
Advertise Here (Get Rates)