Up For a Weekend Swim? 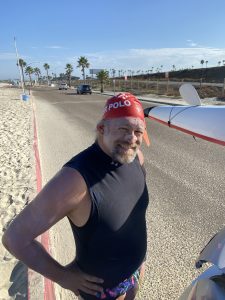 So, what did you do over the weekend? For Joe Camporesi, former assistant Coronado High School water polo coach (2000 – 2004), his answer is jaw dropping! “I swam 16.2 miles around Coronado.” That’s right, 28,512 yards from Tower 0 at the Silver Strand State Beach in the ocean, north along the Strand, skirting Zuniga Point into San Diego Bay, all the way around to Glorietta Bay where he finished at the Coronado Boat House.

“Joe Campo,” as friends know him, has always been a swimmer. When COVID-19 hit and pools closed his friend and former Coronado High School biology teacher, Larry Cartwright, told him about his swim route from Il Fornaio to Glorietta Bay. When the bay reopened, Joe began swimming 2 miles each week. Soon Joe was swimming 4 miles, then 6. When he learned a small group of socially distanced swimmers was going to swim around the island, Joe was all in!

Fewer than a dozen swimmers started at the Silver Strand State Beach, many of whom swam in the ocean to Stan’s Beach at the Coronado Shores. Swim organizer, Kenton Rush Jones, and Joe Campo were the only swimmers to complete the full 16.2 mile swim. A few swimmers joined Joe and Kenton to swim the final 2 to 3 miles.

At the start, Joe felt nervous, but prepared. “My biggest concern,” Joe explained, “was cramping and dehydration. I worried about my goggles fogging and leaking.” Joe needed to protect his eyes while enduring salt and sun for 9 hours. He wore fins to protect his feet although he is not a big kicker. “Fins are helpful in case of emergency and I have to get to shore quickly,” said Joe.

When asked about sharks he responded, “I have the same reaction when I touch seaweed, kelp, sea grass or a shark. It is all the same. I think there is a greater chance of being killed by a bee sting than bitten by a shark.”

Joe said he replayed SEAL Admiral Bill McRaven’s speech, Make Your Bed in his mind before the swim. During BUD/S training just before a night dive off San Clemente, McRaven describes how the trainees were shown films about sharks in the water – one of many psychological “exercises” in BUD/S. Joe said it was about “perception not reality.” This being said, Joe chose to wear a shark band on his ankle. . . just in case. 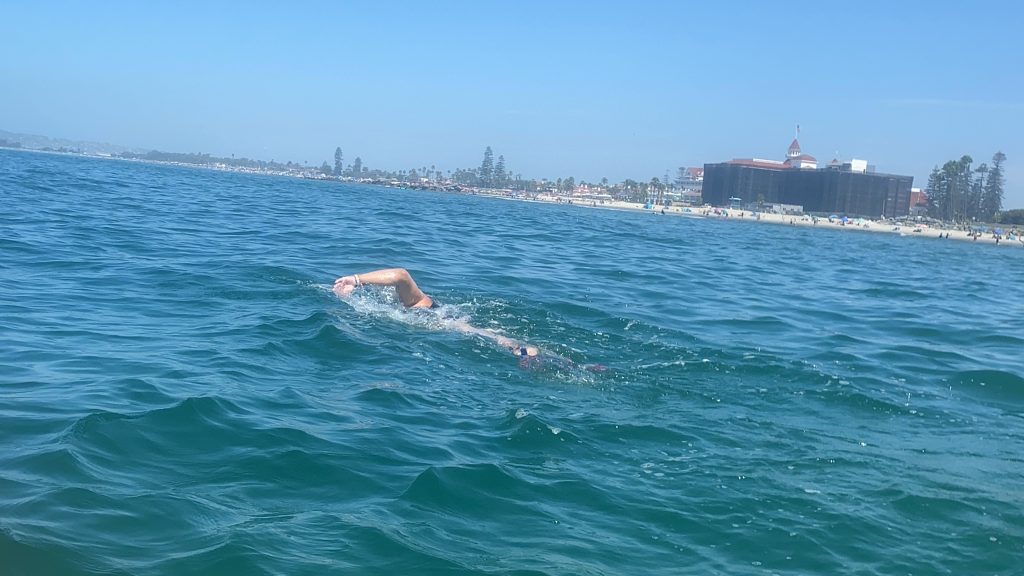 Although the swimmers began at 9:00am, a time when wind often picks up, the wind held off. It was choppy but conditions could have been worse. Joe’s wife, Katy, was Joe’s safety boat. She paddled the distance in her Hawaiian outrigger canoe. There is no storage in a one-peron outrigger, so Katy wore a 30 pound backpack filled with nourishment and fluids for Joe, Kenton, and herself. According to swimming guidelines, swimmers cannot touch a boat, so Katy tossed bottles of water or electrolyte and a snack of energy shots, Fig Newtons, or his favorite swim food – peanut butter in tortillas. Joe and Kenton took breaks every 30 minutes, for about a minute to refuel before continuing on.

Heat was a big concern as Coronado experienced a heat wave this past weekend. Joe said, “It was much harder on the paddlers than on the swimmers. They suffered high temperatures, sun exposure, and sea sickness bobbing in the swell and chop.” Joe explained that sitting in a small outrigger canoe, unable to alter position, for over 9 hours was painful for Katy and her fellow paddler, Martha Seaman. Katy was far sorer than Joe the following day.

Joe wore a shirt for sun protection and red cap for visibility. His longest swim prior to this feat was an 8 mile swim from Scripps to South Mission Bay, but Saturday’s swim was twice the distance.

Zuniga Point was a surprise to Joe as he thought he would be able to easily swim across the jetty. “There were so many abandoned boats out there and boats sunken below the surface. We had to swim out toward Zuniga Point– further than we thought. My biggest concern was scraping on the rocks or hitting a wreck,” said Joe. “I still had a long way to go, and I didn’t want to be bleeding and risk infection.”

As Joe rounded the corner of North Island, a sense of exhaustion began to creep in. His brain was telling him to swim left, but it was the wrong way. He kept telling himself, “Reach. Roll. Extend. Pull.” He worked to maximize and lengthen each stroke to increase efficiency. Throughout the marathon he set small sequential distances for himself. At first, it was swim to the Shores and the Hotel Del. Then swim past Zuniga Point, then the aircraft carriers. If he could swim that far, then he could swim to the Ferry Landing. If he could swim to the Ferry Landing, then it was “downhill” to Tidelands. He was almost there.

A friend and fellow swimmer Carlos Escaba joined Joe at Il Fornaio. Carlos later noted that Joe looked exhausted; at the time he just exclaimed, “You are crazy!”

Joe’s wife Katy said, “It was a huge boost for Joe to have Carlos meet him there.” Another boost lay ahead.

At Tidelands, Joe’s plan was to link up with his daughter, Summer, a 2020 graduate from University City High School and water polo player. Joe tried not to get his hopes up in the event this did not happen. “With timing being so uncertain,” said Joe, “it is easy to miss someone.” But as Joe swam toward the bridge, he heard the sweet voice of his daughter calling to him, “Dad! Dad!”

“I was ecstatic to see Summer. She definitely lifted my spirits. I said, ‘You ready? Let’s do this!’” Joe hugged his daughter and together, under Katy’s watchful eye, and a handful of friends along side, swam the final distance to Glorietta Bay Park and the Boat House. 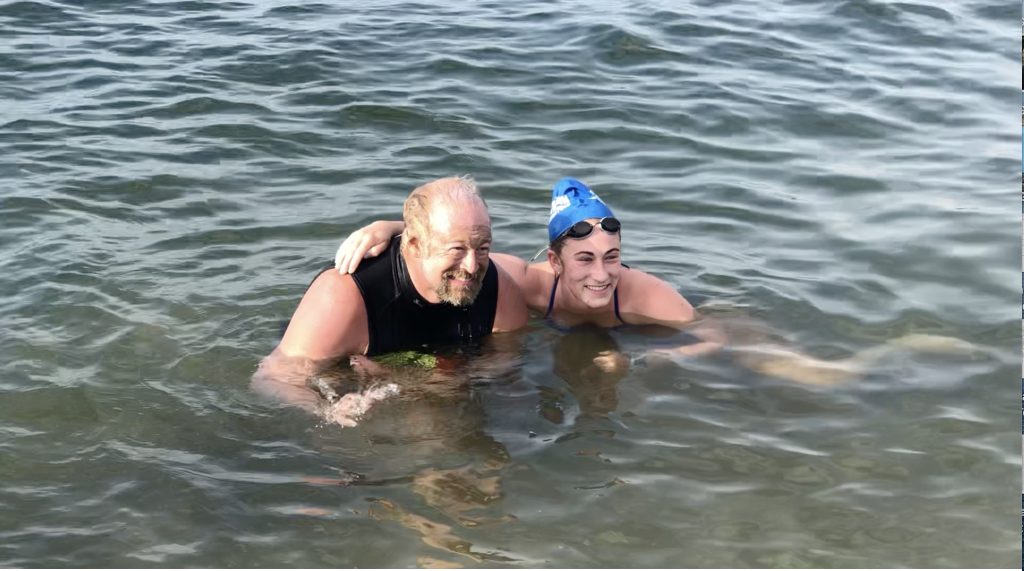 When Joe, Summer, and Katy arrived at the beach at Glorietta Bay Park, Joe was tired but still felt as if he had couple of more miles left in him. Clearly pleased with his accomplishment Joe stated, “I didn’t do it for a medal or trophy, I did it for the sheer enjoyment of the water and to push and test my limits.” 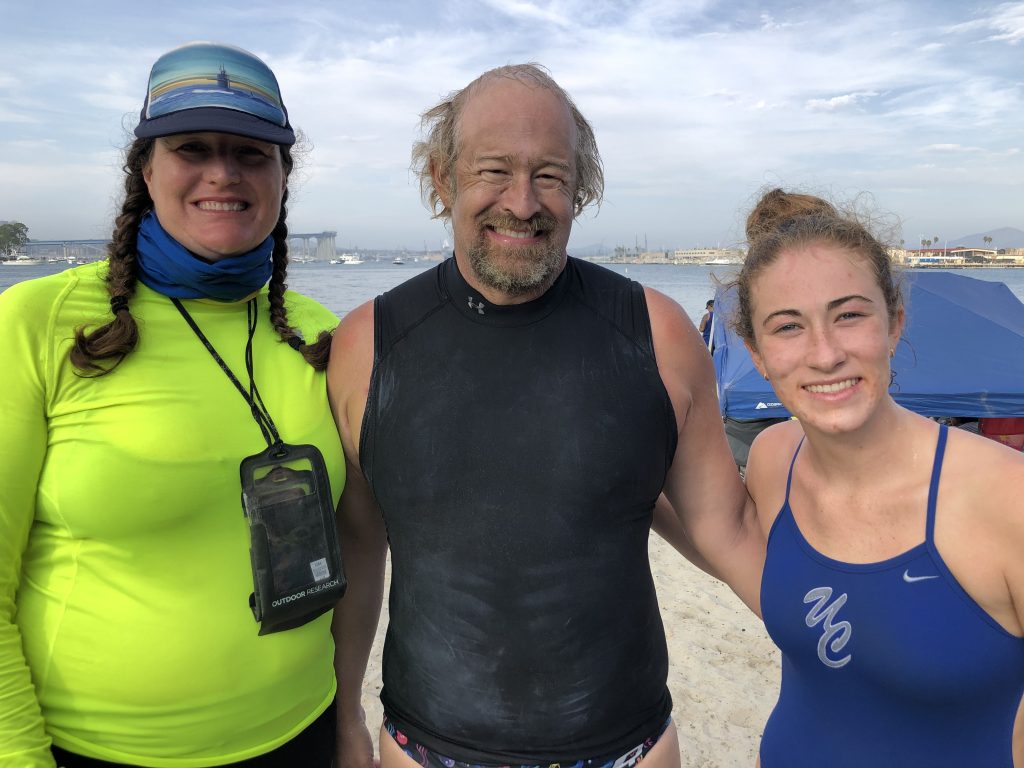 When asked if he ever thought about stopping Joe’s response should have made ADM McRaven proud: “I was committed to my situation and quitting was just not an option.”

When Joe stood and walked out of the water, there was no fanfair – just his family, Katy and Summer, and few friends. The crowded late Saturday afternoon beach was unaware of his monumental accomplishment in the midst of a pandemic. He had trained hard and set his mind to completing the swim. He challenged himself and finished strong. Yes, Joe Camporesi had a great weekend!

And you? How did you spend your weekend?

He was the youngest of 13 children. With all those older siblings to influence him, it’s no wonder Tiger Johnson developed such an indelible...
Read more
Education

Due to a slowing of appointments at COVID-19 vaccination sites, the County of San Diego today expanded the category of those eligible to include...
Read more
History

Over 3,500 Pounds of Trash Removed from Coronado! (video)

Thank you to everyone who participated in Emerald Keepers' CAN THE TRASH during September! Drawing prizes included 22 local gift certificates purchased by Emerald...
Read more
People

Emerald Keepers of the Month, and their Beach Tree

Everyone has a friend who is an early riser. Judy Clark is that friend. Judy convinced her friends Genevieve Rohan and Carol Lambert to...
Read more
Community News

An underwater scene that seems as big as the ocean greets those entering the children’s area of the newly reopened Coronado Public Library. Inspired...
Read more
Community News

“Can The Trash” – Community Clean-Up

Emerald Keepers invites you to help clean up trash in Coronado and email photos over the next two weeks (Sept. 7 to 21) to...
Read more
People