Reflecting upon the events of this past week, I am struck by the depth of injustice that took place when George Floyd’s life was taken from him. That this senseless act was carried out by individuals entrusted with a position of authority—individuals who swore to protect and serve all—makes it especially disturbing.

There is no way to fully capture the depth of injustice or the extent of the pain that has been rendered to black Americans throughout our nation’s history. That the image of a law enforcement official with his knee pressed on the neck of a restrained, breathless individual shook all of us is understandable; the protests taking place around the country are no surprise. As we all struggle to make sense of the current state of our country, it can be difficult to see the light against the backdrop of so much darkness.

If you need something “good” to hold on to, hold on to the unanimous call for justice—initiated by the outrageous death of George Floyd—from the entire nation by people of EVERY race, age, gender, socioeconomic status, political affiliation, and position of power.

Hold on to the scene of thousands of people—from every corner of San Diego County—people representing EVERY race, age, gender, socioeconomic status, political affiliation, and position of power uniting together after a night of vandalism and looting to peacefully clean up the La Mesa community.

These acts of unity cannot replace the life of George Floyd or others that have died like him; coming together to clean a community does not carry the promise that it will not be destroyed again.

But if you need something to hold on to, hold on to the actions of this past week: the powerful demonstration of solidarity and a unilateral belief that the majority holds in justice for all, the equal application of law for all, and peace for all.

We are not a perfect union—far from it. But if we can band together, if we can continue to stand up unapologetically for justice, equality, and peace, we will not only honor the life of George Floyd, we will honor the unheard voices of past generations, and we can, together, work to realize the vision of what America can and must become.

Mayor Bailey followed that with a letter to California Governor Gavin Newsom: 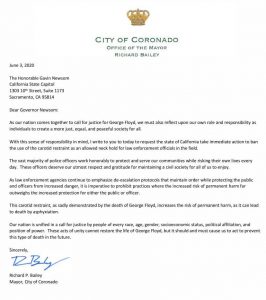 As our nation comes together to call for justice for George Floyd, we must also reflect upon our own role and responsibility as individuals to create a more just, equal, and peaceful society for all.

With this sense of responsibility in mind, I write to the Governor today to request the state of California take immediate action to ban the use of the carotid restraint as an allowed neck hold for law enforcement officials in the field.

The vast majority of police officers work honorably to protect and serve our communities while risking their own lives every day. These officers deserve our utmost respect and gratitude for maintaining a civil society for all of us to enjoy.

As law enforcement agencies continue to emphasize de-escalation protocols that maintain order while protecting the public and officers from increased danger, it is imperative to prohibit practices where the increased risk of permanent harm far outweighs the increased protection for either the public or the officer.

The carotid restraint, as sadly demonstrated by the death of George Floyd, increases the risk of permanent harm, as it can lead to death by asphyxiation.

Our nation is unified in a call for justice by people of every race, age, gender, socioeconomic status, political affiliation, and position of power. These acts of unity cannot restore the life of George Floyd, but it should and must cause us to act to prevent this type of death in the future.

The Coronado Police Department posted on their Facebook page on Black Out Tuesday:

We are shocked and saddened, and share your deep concerns over the tragic death of George Floyd. As the world responds to the tragic injustice to #GeorgeFloyd, we want our community to know we are committed to protecting free speech, keeping our citizens and businesses safe, and supporting peaceful protests.

Please know that the Coronado Police Department stands in solidarity with the fight against systemic racism. We are taking this time to learn and listen. #Blackouttuesday #tolistenistolearn

CPD then announced the elimination of the use of the Cartoid Neck Restraint:

The use of the Carotid Neck Restraint can cause undue harm. The City of Coronado Police will eliminate its use effective today [June 3]. We will continue to focus on de-escalation as we serve our community.

IT'S NEVER 2L8, a Coronado local band, got creative this 4th of July to help Coronado celebrate the busiest day of the year. The...
Read more
Community News

UPDATED July 7, 2020 5:00pm From the San Diego Humane Society: It is with heavy hearts we share that the ailing bald eagle admitted to San...
Read more
Community News

Coronado City Council member Marvin Heinze speaks about the very contagious coronavirus and how covering our face is one way we can help protect...
Read more