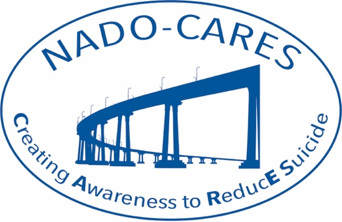 Several Coronado residents have banded together to fight against the increased prevalence of suicide in all facets of our society. The epidemic of suicide has hit San Diego hard as a whole, and particularly Coronado given the presence of the San Diego–Coronado Bay Bridge. NADO-CARES, a newly formed non-profit, was formed by Coronado residents who have all been touched personally by suicide.

NADO-CARES was founded by an active duty Marine whose daughter attempted to take her life just over two years ago, and who has had several Marines within his unit take or attempt to take their lives. In addition, on April 29, 2019, Colonel Thomas Fahy was driving across the San Diego-Coronado Bridge when he noticed a crowd gathering at the bridge’s apex. A woman had stopped her car and parked alongside the guardrail. She then climbed onto the hood of her car in an attempt to jump off of the bridge. Observers were attempting to persuade her not to jump. Upon realizing the gravity of the situation, Colonel Fahy immediately stopped his vehicle, jumped out and ran to the scene. He grabbed the woman off the hood while onlookers distracted her and held her there for over 10 minutes while she was fighting, biting and scratching him as he tried to calm her. First responders arrived and took control of the situation. His unhesitating actions that placed himself in danger and injury undoubtedly saved the woman’s life.

The other two board members, Lisa Davenport and Greg Lehr, have been inspired to join NADO-CARES because they have either lost a family member to suicide or had a family member witness a person jump to their death off the San Diego-Coronado Bridge.

Sadly, the statistics on suicide are moving in the wrong direction. According to the Center for Disease Control and Prevention (CDC), in 2017:

It is seven times more likely that a person attempting suicide on the bridge is a resident of Coronado. Furthermore, according to the Department of Defense, the suicide rate for active-duty U.S. military members in 2018 was the highest on record since the Defense Department began tracking self-inflicted deaths in 2001.

NADO-CARES will partner with Coronado Adventures and Seashore Properties for its 1st Annual Fundraiser scheduled for May 2, 2020 in Coronado. Seashore Properties is a Coronado real estate company dedicated to supporting the local community. Those taking part in the fundraiser will have an adventure filled day exploring many of Coronado’s iconic sights as well as the many hidden gems of the island. More importantly, participants will help in the fight to reduce suicide and do away with the stigma associated with suicide. The money raised will be used to directly assist family members affected by suicide, military suicide prevention groups and mental health organizations.

The wind, rain and tides worked together to reveal "buried treasure" in Coronado this week. The SS Monte Carlo is displaying her rusted hull...
Read more
Community News

Gusty winds ahead of a looming storm have the National Weather Service calling this unusual weather pattern “wild January.”While the rain is certainly...
Read more