From almost the day it opened 132 years ago this month, The Del has continuously undergone renovations and updates during its storied past. For history buffs, you may discover some unique facts, and others may have actually experienced these changes growing up. Did you know that the original Coronado Public Library was located there from 1895 through 1909? Does anyone remember playing on the 18-hole golf course or 9-hole mini golf at The Del between 1923 through 1960? Did you know that the Est. 1888 lobby store was previously a swanky lounge, and that in 1904 The Del was also home to the first outdoor electric Christmas tree, and housed two of the original Dr. Seuss paintings of “I Dreamed I was a Doorman at The Del.”

At a recent presentation on the Del’s Past, Present and Future held at the Coronado Library, Kathy Breedlove, Masterplan Communication Director, and General Manager Harold Rapoza offered decade-by-decade highlights along with glimpses of what’s coming next for the hotel.

The infamous Tent City was created in 1900 and existed until 1939 in response to the need for more affordable options. At its peak, 500 tents and cottages filled the grounds along with a dance pavilion, school, carousel and more. The going rate for a furnished tent was $3.50 per week versus $3.00 per night at The Del.

Back in 1902, the six-month summer season was considered off peak and the first major renovations began. This included a kitchen remodel, conversion of the lowest level to sun parlors, and relocation of amenity areas such as the cigar stand, art rooms and telegraph office.

Early improvements included the construction of the Ice House and the Natural History Museum, an indoor plunge pool and bathhouse. An 80-foot smokestack was constructed for steam and a jetty was built for beach protection. In the rooms, fireplaces began to be removed, and private bathrooms were installed in some of the rooms. By the 1920s, The Del had expanded its industrial facilities to include the laundry (built in 1919), garage, print shop, upholstery shop, and carpentry shop.

Even though the 1930s saw the depression era, The Del was able to add recreation enhancements like the outdoor pool, which was originally saltwater and tennis courts. From 1944 through 1972, the grounds also included a playground for its younger guests.

The 1950s focused on the fifth-floor renovations, which had been a less desirable area with rooms with no private restrooms that were converted to include bathrooms in every guest room. The lobby shops were redone to better reflect customers’ needs. Guest entered through a revolving door. 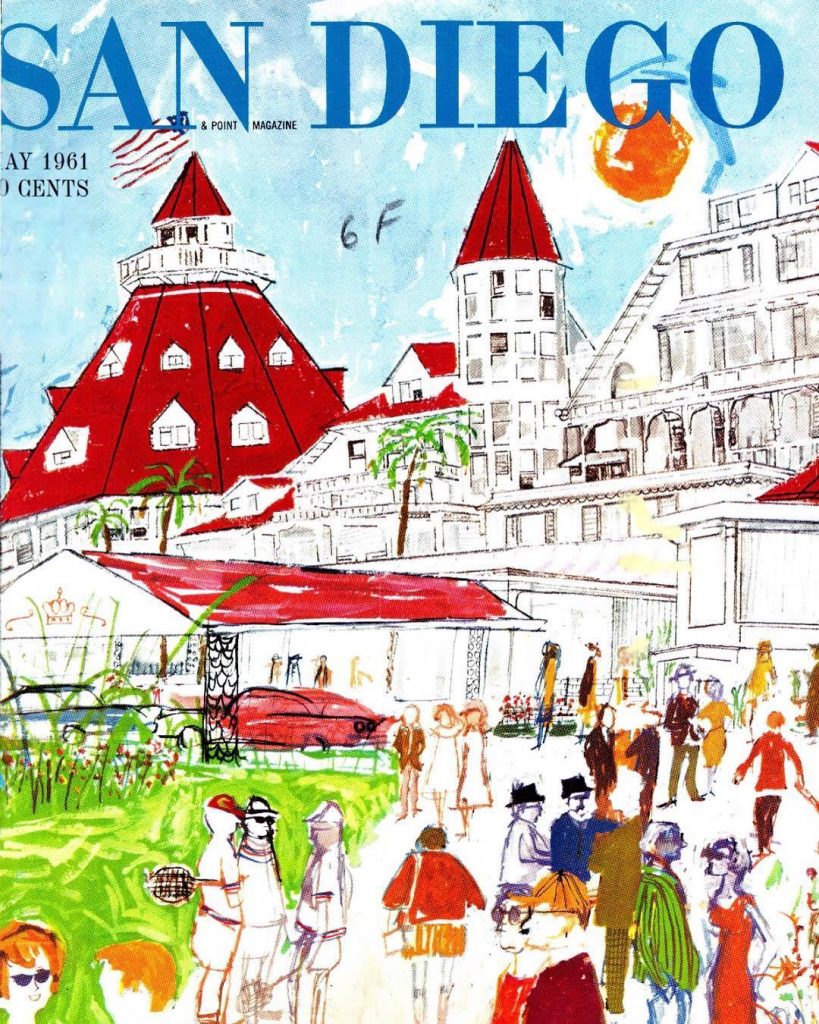 The 1960s were the era of glamorous renovations with updates including fancier meeting and public spaces, a Victorian lounge and modified front porch. The Del was featured in San Diego Magazine in 1961, highlighting these renovations by then owners the Alessio Brothers.

With the opening of the San Diego-Coronado Bridge in 1969, The Del needed a major expansion to keep up with the growing crowds under the guidance of Larry Lawrence who also expanded the hotel’s group business. The 1970s saw the addition of 200 rooms in Ocean Towers, with its upper level, Vista Lounge, the California Cabanas and Grande Hall. Interesting to note that the basement of Grande Hall was set up as a co-generation plant with a jet engine to generate power, which hasn’t been used since the 1980s, but the last of the equipment was just removed last year during the current renovations.

On the move was the theme of the 1980s and 1990s with the moving of the Oxford Building to the hotel property in 1986 and Windsor Cottage in 1990. The Windsor Cottage originally served as event space and then a restaurant, prior to being moved again to its current location where it is a retreat for Beach Village guests and owners and Club at The Del members.

The late 1990s through 2000s did not produce the most visible changes, but included important seismic upgrades to the smokestack and Victorian Building, new electric services, air conditioning, and structural reinforcements to the Crown Room. The original master plan was approved in 2002 after ten years of planning. The addition of beach Village in 2007 was part of this original plan, adding 78 guest rooms and 35 whole-ownership limited term use condominiums to the expanding property.

The master plan was amended in 2008 to reorganize the site plan around an area on the property designated as a seismic zone. This plan also preserved the Laundry Building which would have been demolished under the previous plan.

After the Blackstone Group took full ownership in 2015, the master plan was re-evaluated and it was determined that the timing was right to begin moving forward with the build-out. Implementation began in 2019 with the opening of the new sea-to-table Serẽa restaurant, north entry parking structure, reroofing of the Victorian building, updated Vista Walk, restoration of the Laundry building and several retail shops.

Stayed tuned for part two of our look at The Del as we see what to expect as the future unfolds. For additional details, check out the masterplan2022.hoteldel.com.