Beginning its third year, Cafe 1134’s weekly “Open Mic Night” is still hosted by its founder Tony Palkovic Jr. Tony considers the Open Mic Night his baby, bringing the idea to the owners in late 2017. Tony shares, “at first they were skeptical. Cafe 1134 had one over 20 years ago but it’s expensive to get licensing.”

Tony shared that over the years the open mic has “grown in impact. We have a handful of local artists and some seasonal artists.” In addition to the weekly Open Mic Night, Tony features artist showcases. He also started a monthly visual artist showcase at Cafe 1134. Calling Open Mic Night his “favorite day of the week,” he explains that his favorite part of hosting is the people. “People go through daily struggles, things they have to do,” he begins, “facilitating the place where people can share their creativity and artistic ability is special to me.”

When asked about the future of Open Mic Night, Tony is fairly lackadaisical while optimistic, “I trust that it’ll let me know. It has a pulse of its own. We are just trying things out like the ‘Summer Showcase’.” For anyone who has been thinking of performing, Tony smiles big and encourages them to, “Come, come! Check it out! You don’t have to perform the first time. Set foot inside and you feel the energy, the supportive vibes.”

While the performances at the Open Mic Night tend to be acoustic music, Tony says that he has seen it all, “lately there’s a lot of backtracks on cell phones that people sing to. Spoken word, motivational speaking, comedy. We are open to any expression.” Tony himself plays guitar and is a signer and songwriter. He is a full time musician, playing venues around Coronado like McP’s and all over San Diego.

Tony is exactly what you would expect of a host at a cafe open mic night. With glasses, his hair pulled back in a tasteful bun, and calm demeanor, Tony is the guy you would trust to support you as you bare your soul to a room full of strangers. Watching the artists come in one after another to sign up, Tony greets them with a hug, a handshake, or a combination of both. Whatever the person seems most comfortable with, Tony reads that and adjusts for it allowing everyone to feel comfortable from the moment they arrive. 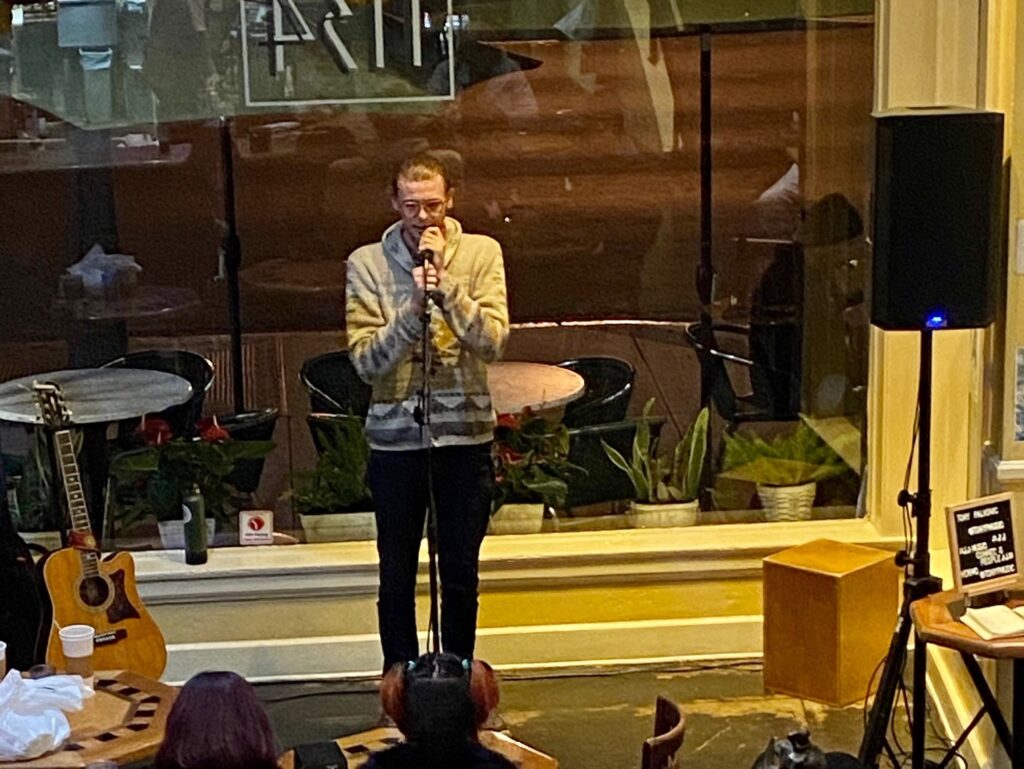 Artists sign up at 6:45pm for a time slot and perform between 7pm and 10pm. Performers have either 10 minutes or two songs to be on stage. To ease any doubt artists have, Tony reminds them that to perform, “you just have to be someone that feels something.” Tony arranges the seating to create a stage area and a variety of audience seating in front of the performers. Along the wall of the restaurant sit cozy tables of two, and the balcony seating provides a birds eye view. Tony introduces the night and highlights Cafe 1134, “Support a venue who supports us and who supports live music.” He also reminds the audience of the Cafe 1134 kitchen and the 1/2 off bottles of wine deal Cafe 1134 has especially for the Open Mic Night.

Former CoSA performer, Mandy, joined the audience with me as we admired the variety of artists there that night. No two looked the same and as we enjoyed the performances, we appreciated the variety that they had. The first performance was William who created a woodys/folky vibe, played the harmonica, and joked that he thinks Greta Thunberg would enjoy his performance. Michael, who shared his age of 58, took the spoken word route in his piece titled, “What Do We Tell The Children.”

The next performer, George Esteban, sat down and sung while playing guitar. His performance was more calm than the first two and felt nice in the cafe atmosphere. George’s music, where he plays guitar, bass, drums, and sings, as well as records and mixes, can be found here.

George shares, “I found out about the open mic just walking down Orange Ave. I live here in Coronado actually, grew up here, went to school here and so I saw the open mic flyer on the Cafe 1134’s window, and decided to perform the next week. By then it was maybe the 2nd or 3rd time the cafe was having an open mic. So I’ve been going to it for a while and seen the progression of it, and how popular it’s gotten. Performing there is really nice, everybody’s super open, welcoming and supportive of all the performers. The host Tony is like one of the most friendly people out there and he really makes the whole cafe feel like you’re performing for a bunch of friends. Honestly, the open mic is probably one of the best things to happen to Coronado!”

The last one that really stood out was Rest Easy who produced his own beats and raps over them. It was a more laid back style without toning down his expression. Rest Easy shares, “I put a lot into my craft spending every day trying to perfect it. Cafe 1134 has been nothing but a great experience for me out of all the open mics I’ve attended. I found out about Cafe 1134 last year when I was performing at Lestat’s open mic on Adams Avenue, someone had recommended I go and since then I haven’t missed a Thursday. What I really like about this place is the welcoming feeling I get as soon as I step in. I’ve received so much support and also had the opportunity to create friendships with people that share the same interest as me. This has given me something to look forward to every week. I can’t thank Tony enough for hosting this week after week and making it possible for me and others to have a moment to share our art.” Check out Rest Easy’s YouTube channel here.

Coronado local Santé Prince (CHS 2010) visited Cafe 1134 Open Mic Night for the first time in November. He shares, “I liked the Open Mic because it was so familiar to me when I walked in. The way the San Diego Open Mic community is, you get to see a lot of the same faces. Having this sense of community and family happening at an open mic in my own home in Coronado, it really added to the experience. I have been going to Cafe 1134 all my life in Coronado. Having a place in Coronado to pursue my artistic endeavors right up the street from where I live, that was great! When I get there I see other artists who have attended my Open Mic, Lyrical Exchange, on Tuesdays. It’s an equal trade off- they see me and they get excited and I see them and I get excited. It means we are all carrying on the path of artistic expression. I had a really fun time. I loved the environment, I loved the deal Cafe 1134 had on the 1/2 off wine. It’s truly a welcoming environment for all expression. I also really liked the art gallery upstairs when they have their visual artist showcase.”

Mandy found the open mic “an entertaining Coronado experience. I’m so glad someone is bringing new performing arts to Coronado. It’s really exciting to see!” To perform or be an audience member in the next Cafe 1134 Open Mic Night hosted by Tony Palkovic Jr., come by Cafe 1134 (1134 Orange Ave, Coronado) on a Thursday at 7pm. No cover charge.

To learn more about Tony, visit his website here.

Coronado tennis has been at the forefront of recent discussion as the City of Coronado reviewed three submissions for tennis concessionaire services at the...
Read more
Business