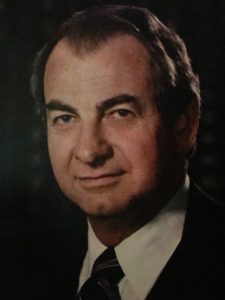 William Travis Morgan, former CEO of mutual fund pioneer Waddell & Reed, and beloved husband, brother, father, grandfather and great-grandfather, left this life on December 30, 2019, passing away peacefully in the arms of his loving family, after 91 full years of life.

A Naval Aviator decorated for valor during the Korean War, he attained the rank of Lieutenant. Stationed aboard the USS Philippine Sea and USS Kearsarge, he flew the storied AD Skyraider in attack squadron VA-115 on many dangerous missions (one of his planes has survived in the collection of Apollo 8 astronaut William A. Anders).

Returning to civilian life, Morgan joined Waddell & Reed as a sales rep, rapidly rising through the ranks to become President, CEO and Chairman of the Board (the first in the company’s history to do so). He managed W&R’s explosive growth until his retirement in 1993, having worked for the same company for 38 years, leaving a lasting legacy of success.

He showed the same loyalty and undying commitment in his private life. While stationed at North Island Naval Station, he was introduced to Coronado native Melody La Mon Hyde. It was love at first sight. They married in 1952 and remained joyously united for 67 years.

Along with his illustrious financial, military and academic careers, Bill was a member of several associations, volunteer groups and charitable communities, including Naval Aviators, Rotary, Roundtable, Christ Church, the Optimists Club, Coronado Golf Club and the Coronado Historical Society.

He lived most of his rich and eventful life in California. After a sixteen-year stay in Kansas City (Waddell & Reed headquarters), he and Melody briefly returned to their home in Mandeville Canyon before relocating back to Coronado.

Bill Morgan was revered for his generosity, humility, honor, brilliant strategy, steady leadership, calm unflappable manner, strong moral compass, compassion, insightful storytelling and witty sense of humor. His laughter was contagious, and able to defuse nearly any situation. He was loved and respected in equal measure. Many used the same phrase to describe him: “The finest man I ever knew.”  He is deeply missed, even as his spirit continues to watch over his ever-expanding family and surviving friends and colleagues. We shall not see his like again.

Services will be private. In lieu of flowers or gifts, the family requests that donations be made to Christ Church of Coronado or to the charity of your choice.

To share remembrances of Bill and his remarkable life, go to: legacy.com.

My phone rang with the dreaded news that I had recently been in close contact with someone who was asymptomatic but tested positive for...
Read more
Community News

The City of Coronado, working with Sharp Coronado Hospital, will provide a vaccination site in Coronado beginning Wednesday, Jan. 13, to help the region...
Read more

If you haven't read our previous articles, this writing is research, recent data, and news about the coronavirus throughout Coronado, California, and the United...
Read more
Letters to the Editor

Submitted by Carolyn RogersonA January 11, 2021 article in The Conversation titled “18 Million US Children are at risk of hunger: How is the problem...
Read more
Community News

Gov. Gavin Newsom has announced that people 65 years of age and older are the next priority group for COVID-19 vaccination, and San Diego...
Read more
Community News

County to Seek Additional Funding for No Place Like Home Program

The County Board of Supervisors unanimously voted Tuesday to apply for $12 million in additional state funding for the No Place Like Home program.No...
Read more
Community News

County Votes to Increase Enforcement on, and Potentially Deny Financial Assistance to, Businesses Not Following Guidelines

The County Board of Supervisors received its first update of 2021 on the region’s COVID-19 response. This was also the first public COVID-19 briefing...
Read more
Advertisement
Advertise Here (Get Rates)