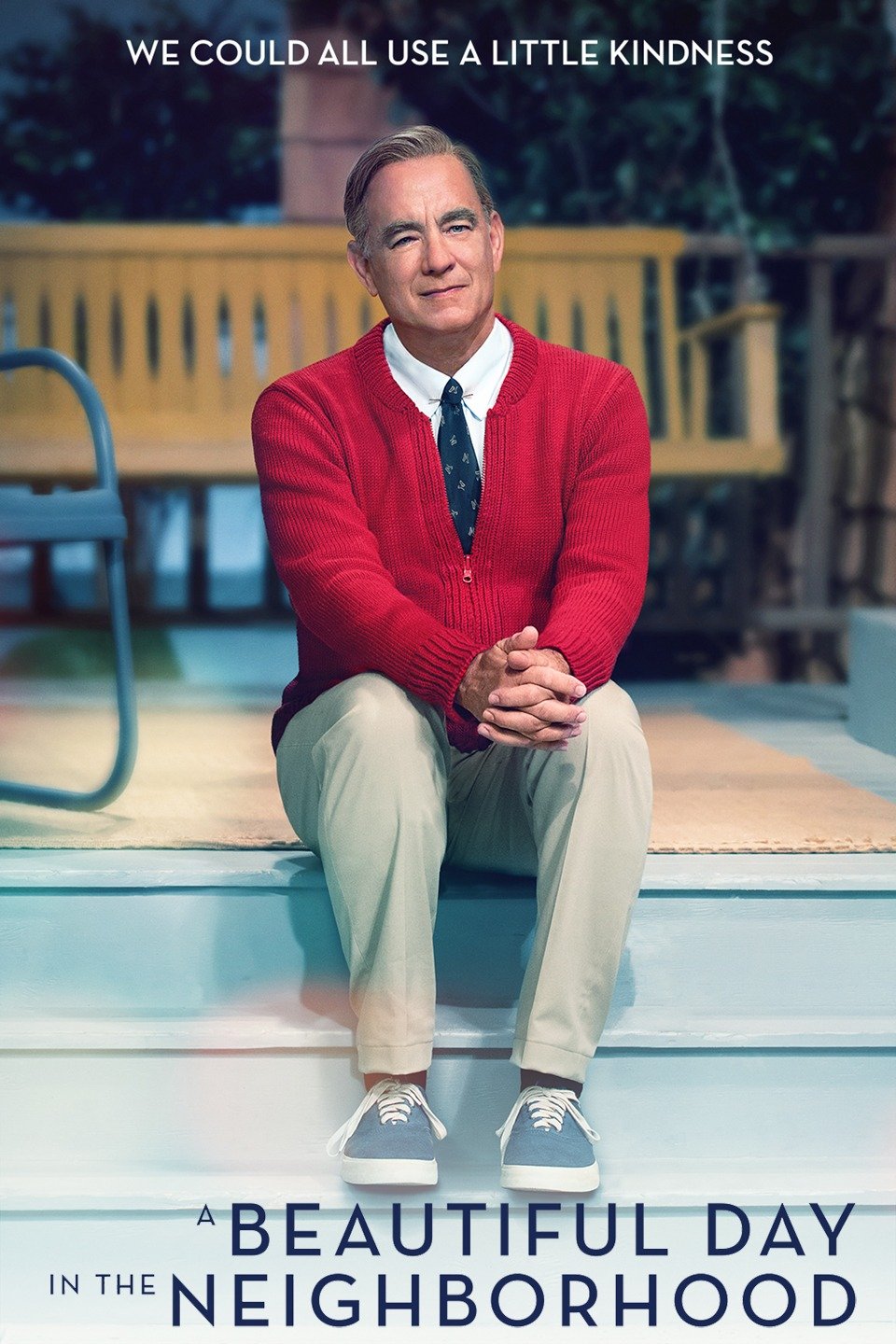 The familiar cartoon trolley cruises into view as the sing-along theme song plays in the new A Beautiful Day in the Neighborhood movie. At first you see Tom Hanks take off his blue blazer and change into his red zippered sweater, but as he puts on his comfy tennis shoes and says, “Won’t you be my neighbor?” he has morphed into Mr. Rogers. This inspirational true story is loosely formatted as a Mr. Rogers’ Neighborhood episode with most of the action in real life, with some transitions spliced in with the original set of the show.

Several of the favorite characters make appearances including Lady Aberlin, Mr. McFeely, along with the beloved well-worn Daniel Tiger and King Friday XIII puppets. Mr. Rogers’ new found friend, Lloyd Vogel, played convincingly by Matthew Rhys, is an investigative reporter for Esquire Magazine. Vogel is offended when he is assigned to write a 400-word piece on Mr. Rogers as a hero and makes no bones about it. His wife Andrea, played by Susan Kelechi Watson, loves Mr. Rogers and implores him to do the piece justice and “Don’t ruin my childhood.”

When Vogel meets Mr. Rogers, he asks “What’s it like to be famous?” to which, Rogers humbly replies, “Fame is a four-letter word. What matters is what we do with it.” Mr. Rogers also emphasized that “I try to look through the lens of the camera and to speak to one child.” It turns out that Mr. Rogers asks personal questions of his own, ferreting out the feud between Vogel and his father. You wonder who is interviewing who as Mr. Rogers demonstrates empathy, kindness and compassion, which are lessons that Vogel needs to learn. Vogel discovers that Mr. Rogers is much more complex than he anticipated for a children’s entertainer.  Mr. Rogers tackled tough issues including death, divorce, war, diversity and many other critical topics.

Another way Mr. Rogers demonstrates genuine care for people is when he takes pictures with many of the people he meets, so he can take them home to his wife Joanne, played lovingly by Maryann Plunkett. When Vogel asks Joanne about how Mr. Rogers is so perfect, she points out that he makes conscious choices on how to respond to anger. He had a routine of swimming, writing letters, reading scriptures, praying for people by name, and playing the low, dark notes loudly on the piano.

In the end, Vogel reunites with his family and writes a 10,000-word article which is as much about himself as it is about Mr. Rogers. His editor Ellen, played by Christine Lahti, loves it so much it becomes a cover story. The ending is sweet as Mr. Rogers brings a pie and shares it with the family, and of course takes one of his famous pictures.

The scene where Vogel and Mr. Rogers ride the subway shows how Mr. Rogers is beloved by both adults and children as everyone breaks out into the theme song together. Mr. Rogers couldn’t have been more perfectly cast as Hanks bore an uncanny resemblance. It turns out that Hanks discovered that he was Rogers’ sixth cousin, so it was definitely meant to be. The movie is slower paced and methodical, much like Mr. Rogers personality. After the movie, one lady said, “If Tom Hanks doesn’t win an Oscar, then Hollywood doesn’t get it.”

In a world where negativity seems to be so prevalent, this is an uplifting movie guaranteed to make you want to go out and spread positivity. Even though Mr. Rogers has been gone 16 years, he has had a resurgence of fame with last year’s documentary which also emphasized his motto “A little kindness makes a world of difference.”

Let’s talk burgers! Everyone has a favorite, but now there’s a fresh, new burger option in town to try with some truffle fries and...
Read more
Business