“Ford v Ferrari” What a Competition! 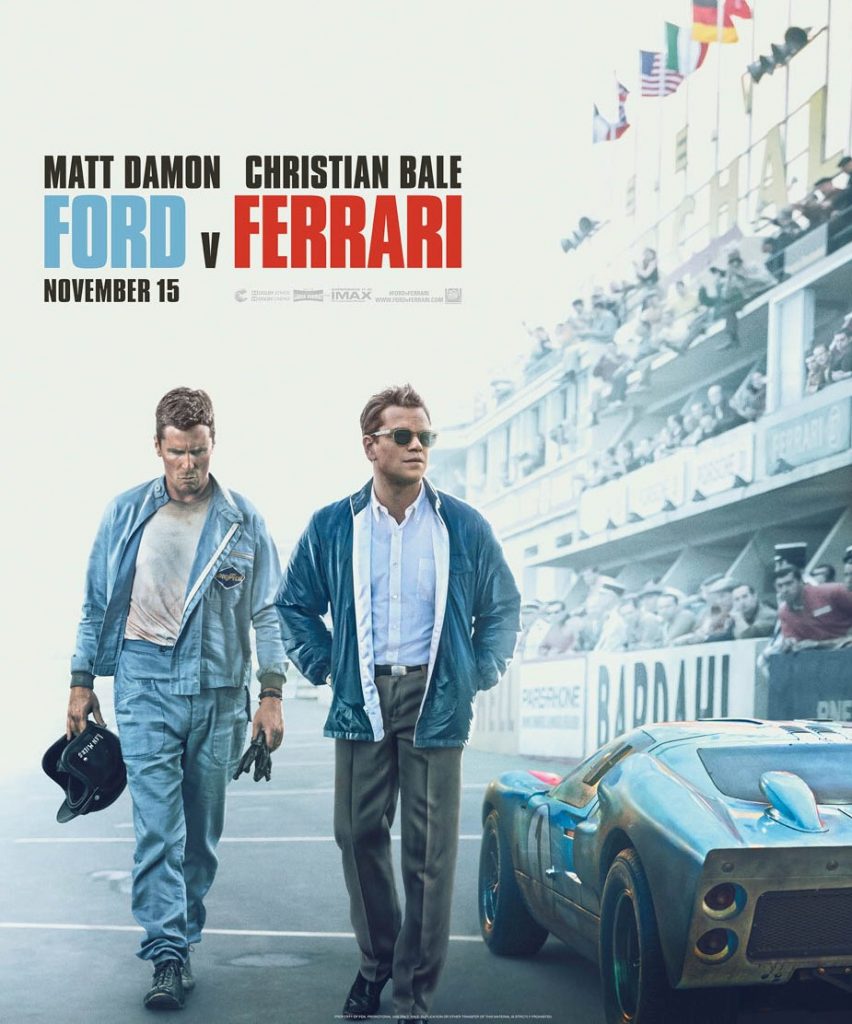 This endearing true tale tells the story of how a Detroit assembly line car maker competed at the highest level in racing against the specialized workshops of Modena, Italy to race in the 24-hour Le Mans race. At the center of the tale is Carroll Shelby, played superbly by Matt Damon, who at the pinnacle of his racing career had a serious heart condition that sidelined him. Fortunately for car lovers, he transitioned into creating some of the most iconic cars ever. Shelby recruited Ken Miles, aka Bulldog, played by Christian Bale, who he knew from the war, to be part of the team at Ford to create a racing division.

It started when the suits at Ford wanted to make an impact, so Henry Ford II, played by Tracy Letts, told his workers to walk home, ruminate and come back with an innovative idea. Lee Iacocca, played by Jon Bernthal, came up with the notion for Ford to get into racing and proposed a merger with Ferrari. Ultimately, Ferrari merged with Fiat and Ford was left to come up with their own plan. Iacocca approached Shelby to help them, since he was the only American to ever win the 24-hour Le Mans race in France, which Ferrari was dominating.

Shelby makes quite an entrance, when Ford debuted the Ford Mustang, my husband and my favorite car, and announced their racing program as he recklessly flies in on an airplane. In his speech, he humorously said, “Like my cars, I’ll make this fast.” Damon creates a very likable character who drives his cobra like a race car even on city streets.

At first, Miles wasn’t interested in being associated with the bureaucracy of Ford, but changed his mind when Shelby took him to test drive the Ford GT 40 and offered him $200 a day plus expenses. They worked together with a team to create the winning car. Miles, like Shelby, had racing in his blood with a need for speed, but the Ford executives didn’t think he fit their “Ford type driver image” and didn’t let him race the first car they developed.

When Shelby sneakily takes Ford out for a ride on the track, he finally understands that winning is no easy task and takes a certain type of person to pull out a victory. Ultimately, Shelby put his company on the line to get Ford to let Miles drive. Miles doesn’t disappoint and wins the race at Daytona, even though Ford stacked the deck against him.

Miles is possessed with perfecting the racecar and winning the race. Bale does an outstanding job of portraying him as a man who isn’t long on social graces, with a temper that causes him to throw wrenches and get in fights, but also has tender moments eating ice cream with his son, played by Noah Jupe, who idolizes him, and dancing with his car loving wife, played supportively by Caitriona Balfe.

When they finally arrive at Le Mans, Miles takes one look at Ferrari’s cars and says, “If this were a beauty pageant, we would have just lost.” Shelby retorts back, “Looks aren’t everything.” The Le Mans race is fraught with problems from the start, with exploding cars and damaged doors, but Miles still sets a lap record. I don’t want to give too much of the story away here, but let’s just say Shelby and Miles had to constantly overcome the whims of Ford, especially by scheming Leo Beebe, played connivingly by Josh Lucas.

This is a fascinating glimpse into a piece of auto racing history and will be enjoyed by all car lovers. The cinematography in this movie was outstanding and made you feel like you were racing on the track and in the gritty action of the pit crew. Even though he is a salty character, Miles has a good heart and I promise everyone is rooting for him to win the race. You may think you already know the ending, but you must see the movie to find out how it really turns out, as Ford is vying for supremacy in the racing world on their own terms.