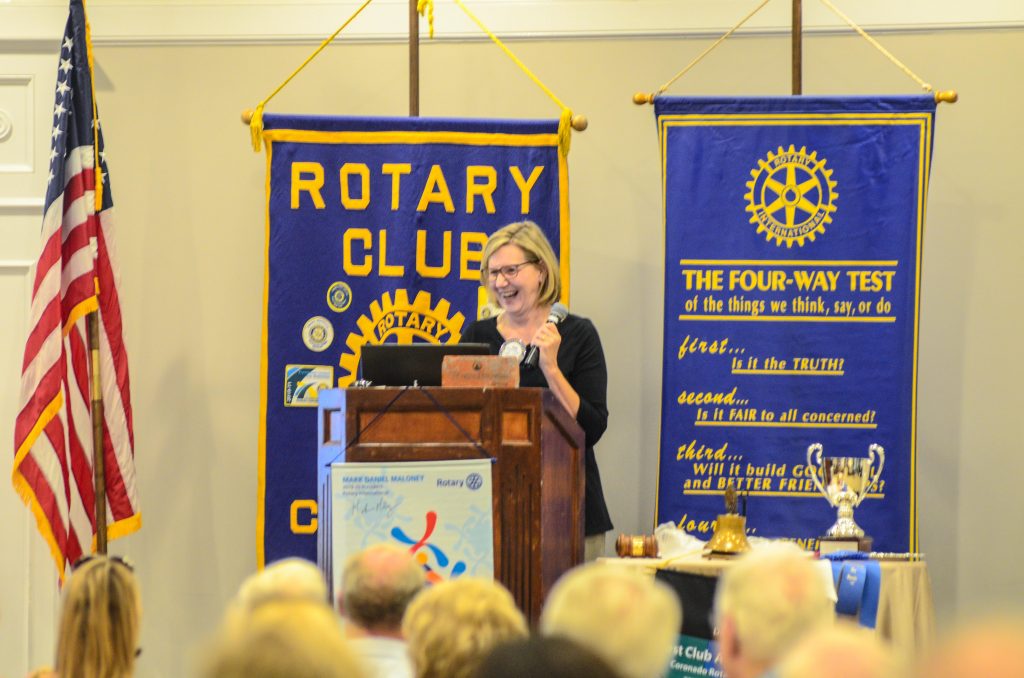 Rotary was a part of Tami Sandke’s life growing up when her dad was an active member.  Her dad had polio in the mid-1950s and worked with Rotary programs, as well as doing advocacy work for Jonas Salk and the March of Dimes, to promote polio immunizations.  She remembers thinking that she would never fit in with Rotary because at the time it was her dad, godfather and their friends telling jokes, singing silly songs and getting involved in community projects. Being an involved member, her dad was often asked to be Rotary president, but never accepted due to his work travel schedule. Tami pointed out that it wasn’t until 1987, after a Supreme Court ruling, that Rotary began allowing women to join. She is the fourth woman president in the Coronado Rotary Club’s 30-year history. She and her husband Bill are the first husband and wife duo to have both served as president in the Coronado Rotary Club. Bill joined in 1993, got on the board in 2002 and served as president in 2005-2006.

The story behind Rotary’s newest president is that she grew up in a small town in the Imperial Valley where she thrived in the agricultural arena raising sheep, pigs and cows for 4H and FFA. Pigs were definitely her favorite, and after transferring for her second year in college to Cal Poly she was a member of both the swine and cattle show teams. She earned her degree in Food Science and then worked for the University of California County Farm Advisory for a year before returning to school for her MBA in Agricultural Business. At that junction, she had two job opportunities, one in Bakersfield and one here in Coronado, which she chose on the basis of this great area. She worked as the Sharp Coronado Hospital Foundation Director from 1987 to 2002. Her very first day on the job, she was introduced to her now-husband Bill, who developed photos for the hospital. Their friendship grew as Bill developed her travel photos and saw she was an interesting lady. They also found camaraderie at Chamber of Commerce events, being the only ones under 50 in the group. They were married in 1991, by which time Tami had started attending law school at night at USD. Bill laughs as he recalls her bringing her law books along on their honeymoon in Idyllwild; interesting choice for two travel loving people to stay so close to home.

Growing up, Tami’s family often traveled across the U.S. to the East Coast to visit family, and spent time camping in the Gulf of Mexico and Baja California. Her first international trip was at the age of 15 with a school group on an educational trip. Her mom was a “super mom” who was very involved in a variety of organizations including AFS, an exchange student program. They hosted students from all over the globe, including Ghana, Turkey, Denmark and Finland. Some came for a couple of weeks and others for the entire school year. Her family formed deep connections with these students, and at 19 she and her younger sister went to visit Paivi, their Finnish student, and then traveled around Europe via Euro rail. The bond continues to this day as they attended Paivi’s daughter’s wedding last year in Finland and hosted them for a visit this summer.

Tami and Bill got to see the worldwide impact of Rotary at the yearly Rotary International Conference, with 27,000 attendees, that was held last month in Hamburg, Germany. “We were able to make amazing connections and see what other countries are doing in terms of fundraising, community engagement and membership,” says Tami. “We had the privilege of meeting Rotary members from Malawi who are involved in a program our member Jerry Winter got us involved in helping to build a children’s hospital and providing medical equipment and wheelchairs for children in need.”

“We were very impressed with all the inspirational projects Rotary is involved with worldwide. It made me excited to be part of it,” comments Tami. Rotary is now engaging the next generations through their Interact program for middle and high school students, which Tami has been an active part of for years, and Rotaract which is aimed at 18 to 30 years old college students and young professionals. These groups are involved in a variety of community service projects including adopting an orphanage in Tijuana.

For this year’s agenda, Tami plans to incorporate the theme from the conference, “Rotary Connects the World,” by focusing on generational, technology, community, international, and fellowship projects. “I prefer to work behind the scenes, and we are fortunate to have 270 amazing members in our vibrant, service-oriented Coronado club,” she says. Being the Rotary president isn’t a full-time job, although she will have to juggle the many hours it takes alongside her law practice. Tami plans to collaborate with members to help get things done. Bill says of Tami, “She doesn’t do anything halfway, so she’s more than all in.”

She wants to advocate for Rotary’s commitment to addressing climate change and promoting environmental stewardship. With this in mind, the Green Committee is working with The Del, where the club has met since 1930, about zero waste at meetings and not utilizing any plastic for Rotary meetings. A key emphasis this year will be on involving more members on technology, allowing them to do even more on Instagram, Facebook, Public Relations, and website development. Two of the younger Coronado Rotarians are looking into finding an app that can be adapted for Rotary use. She is also hoping some members step forward to create videos that highlight Rotarians in action.

The speaker chairs have been working on adding more speakers on relevant topics. She is encouraging members to get involved in additional hands-on projects, as well as concentrate on Rotary International’s six areas of focus. They currently have a $200,000 philanthropy budget for community, regional and international projects. She is working with the board to establish a fund to give money to small groups of Rotarians interested in community projects. “I’d like to see member driven projects that include kids and seniors working together.” She also has plans to strengthen the Limbs of Freedom prosthetic program which was started by Coronado Rotary with the Calafia Rotary Club in Ensenada.

The other subject close to her heart is polio and she is proud of the prevention and education efforts Rotary has spearheaded since the first PolioPlus program during her father’s time to the current End Polio Now program. “We are so very close to curing polio.  In August, Nigeria is expected to be declared polio free and the only remaining countries with the disease are Afghanistan and Pakistan,” she is pleased to say. Since 1979, Rotary has worked with a variety of partners to vaccinate more than 2.5 billion children against polio.

The Coronado Rotary Club has a host of successful annual fundraisers including the Low Tide Ride and Stride, which raised more than $100,000 this year, the annual Jim Laslavic Charity Golf Tournament, and the End Polio Now Wine Tasting, among others. Rotary is also about fellowship, focusing on social community events, Flags on the Avenue, beach cleanup days, and many other opportunities. 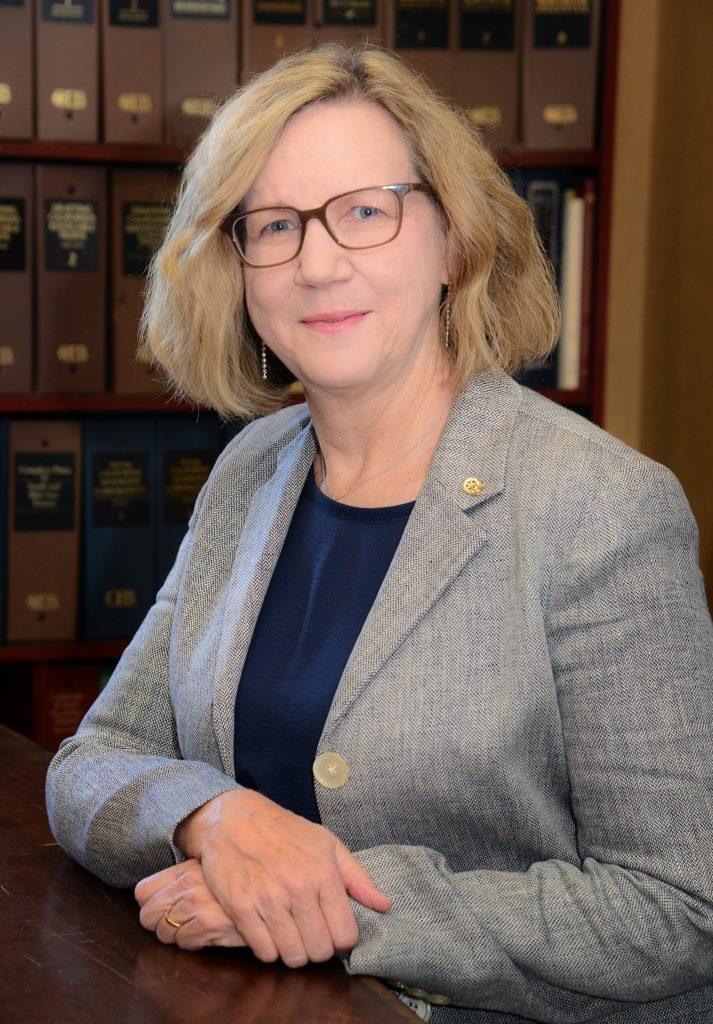 “We have an excellent team of people willing to help. It’s not about me, I’m just here to be supportive to the many active members who want to make a real difference throughout the community and the world,” she concludes. Rotarians are people of action in making their community and the world a better place, and Tami is leading the charge this year in Coronado.

The Purple Project, a San Diego nonprofit organization that provides aid and support to  domestic violence shelters in need is excited to present a...
Read more
Business

The Coronado Chamber of Commerce invited its members to participate in a fun Happy Holidays video. Hoping for 20 volunteers to record an on-screen...
Read more
People

A Holiday of Giving Thanks: Altered Traditions and New Beginnings

This year, many traditions have been altered due to COVID-19, including the Thanksgiving holiday, which is typically the most traveled holiday of the year....
Read more
Entertainment

Our Visual Storyteller Brad Willis has invited four of Coronado's most well-known minstrels to submit a holiday song and message to the community. In...
Read more
Community News

The City of Coronado is partnering with CSU Long Beach’s shark lab to learn more about the local shark population. This comes after an...
Read more

Parking in Coronado is one of the best bargains around at just 25 cents per hour, but our need to collect quarters will soon...
Read more
City of Coronado

“I want to wake up the people of Coronado,” emphasizes long-time resident Kirk Horvath, who has been a write-in candidate for mayor for...
Read more
People

Not many 11-year-olds can claim they are a published author, but that is just one of the many accomplishments of River Wadleigh, who is...
Read more
City of Coronado

This year has been one of more downs than ups for businesses and restaurants in Coronado (and worldwide) and that has created quite a...
Read more
City of Coronado

A budget surplus, designating Mills Act homes, the 130 Challenge and Halloween festivities were all highlights of the Coronado City Council meeting on October...
Read more
Advertisement
Advertise Here (Get Rates)