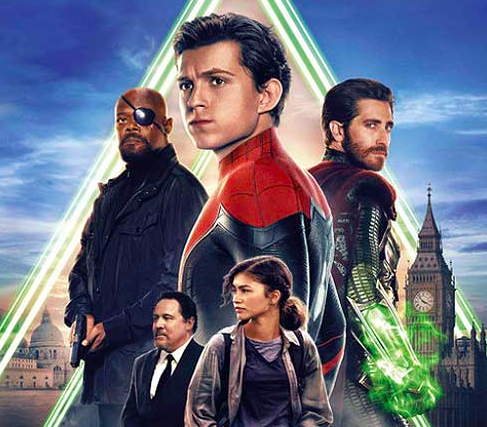 Spider-Man: Far From Home opened in Coronado Village Theatre on Tuesday, July 2nd, to kick off the 4th of July week with a bang. For Avengers fans, the movie opens with a fitting tribute to Ironman, Black Widow, Vision and Captain America, the Avengers who died in the last movie, Avengers: End Game. End Game marked the end of an era in which Marvel concluded the third phase of their Avengers storyline causing Avengers fans to wonder what is coming next. 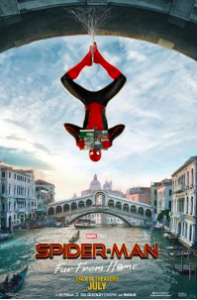 Spider-Man: Far From Home answers that question and provides glimpses into how the Marvel storylines will continue to develop. “I thought they executed the movie very well, with its plot twists and action-packed scenes, it is one of my favorite Marvel movies so far,” said my 12 year-old son who joined me for the movie. The friendly neighborhood Spider-Man may appeal even more to younger audiences as they can connect and identify with the 16 year-old lead character more-so than some of the other more violent and mature Marvel movies.

At the beginning of the movie viewers are reminded that Tony Stark (Ironman) passed on his roles and responsibilities as an Avenger to the young 16 year-old Spider-Man when he died in End Game. Spider-Man, played by Tom Holland, is left with the weight of saving the world whenever needed on his shoulders and struggles with the void left behind after Stark, his mentor, died. Holland is a fantastic actor who endears the audience to him with his humor, and with his awkward teenage tendencies and desire to just be a kid with a normal life, rather than a super-hero. Holland is a fan favorite and was described by my kids as the “best actor to ever play the role of Spider-Man.” 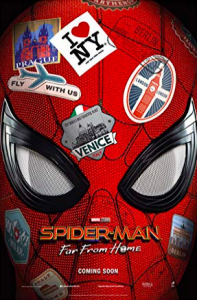 Nick Fury made a comeback in this film after a smaller than normal role in Avengers: End-Game, bringing his quick wit and humor with him. Spider-Man: Far From Home also introduced a new character, Mysterio, played by Jake Gyllenhaal, who added interesting layers to the storyline by adding both an inter-dimensional twist and a new take on virtual reality.

Visually stunning, funny and action-packed, Spider-Man: Far From Home offers Avengers fans a great reason to beat the summer heat by heading inside to watch the movie.

Rating: Rated PG-13 for sci-fi action violence and some language.