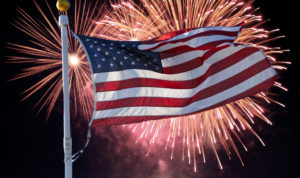 Each year, July 4th is celebrated as Independence Day, one of America’s most favored and patriotic holidays. The fireworks, the parades, the music, and the frivolity pay homage to the occasion more than two centuries ago when the thirteen original American colonies were emancipated from British rule. Freedom.

But as any serviceman or woman knows, freedom does not come easily, indefinitely, or without sacrifice.

No family knows the cost of freedom more acutely than the Keating family of Arizona and Coronado. In May of 2016, the Keatings lost a son, a brother, and a husband in Charlie, a Navy SEAL, while he was deployed in Iraq defending the freedoms so many of us take for granted.

But Charlie’s legacy lives on. Thanks to the tenacious efforts of Charlie’s family, friends, and supporters, the C4 Foundation was founded to honor Charlie’s memory and support SEALs and their families before, during, and after deployment. The simple yet powerful mission “Preserve the Family” guides the work of the C4 Foundation which recently opened C4 Ranch in the Mesa Grande region of San Diego as a respite for SEALs and their families to promote communication, mindfulness, and restoration after deployment.

To bring awareness to the C4 Foundation and honor Charlie’s fun-loving spirit, the Keatings enlisted the support of family friend and fellow Arizona/Coronado resident Nate Nathan and his band, the MacDaddy-O’s, to throw one of the biggest and most festive parties in Coronado each year at the Hotel Del Coronado. 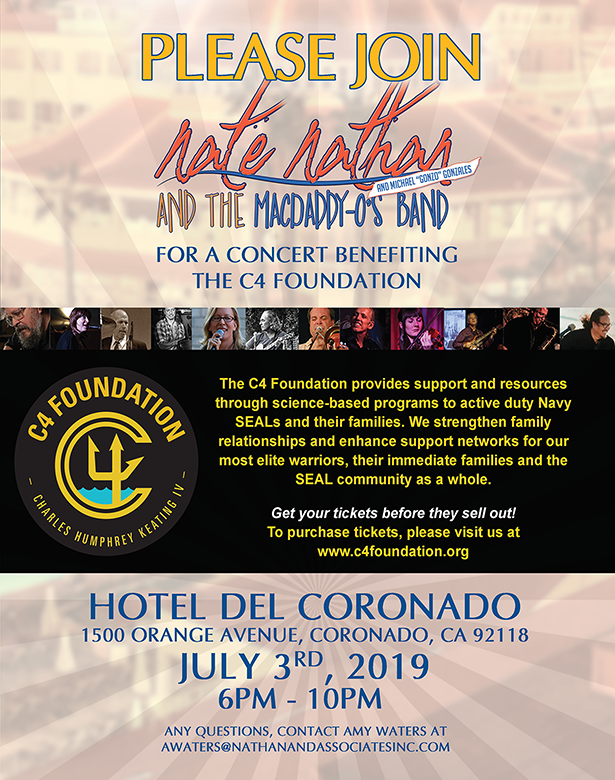 Charles Keating III, Charlie’s father, says that a party of this scale and scope is befitting his son’s legacy.

“Although it is hard,” admits Charles, “Charlie wouldn’t have wanted us sitting around feeling sad. He loved Coronado and the SEAL community, he loved the beach and the ocean, and he loved a party. The concert is just the sort of thing that really celebrates who he was, what he stood for and all the lives he touched.”

The sentiment was echoed by Charlie’s childhood friend and C4 Foundation Board of Directors Member Chris Clements of The Clements Group Real Estate. “Charlie was a classic fun-loving guy. He really cared about Coronado and like so many others from Arizona, he grew up spending his summers here,” says Chris. “What’s so unique about Charlie is that he unites all the communities that make Coronado what it is: full-time, part-time, Arizona, Coronado, and military. He was part of every community and was such a loved guy.”

Nate Nathan, who is as successful in real estate as he is on stage, first conceived of holding a concert at the Hotel del Coronado in 2017 to commemorate the 37th Anniversary of his real estate business, Nathan & Associates. When approached to partner with the C4 Foundation to evolve the event into a fundraiser, Nate was quick to lend his support.

“The Keatings are a great family,” says Nate. “I am honored to be able to support the Foundation. It was an easy decision because the SEALs are the common denominator that unites us around the world. The magic in what they do for us, the amazing power of support — they are literally saving the world.”

Now approaching its third year of existence, the concert has sold out each year and shows no sign of losing momentum. Nate has every intention of continuing the tradition indefinitely. “We are really excited about the success of this concert and the anticipation that grows every year. It brings awareness to Arizona companies and is a big kumbaya within the community. Plus, it raises money for such a good cause. You really can’t ask for more than that.”

Nate and the MacDaddy-O’s have featured nationally as the opening act for Joan Jett and Cheap Trick, among other high-profile acts, and are highly coveted at venues in the Southwest and beyond. The concert to be held July 3rd at the Hotel del Coronado is expected to sell out with a crowd in excess of 800. Tickets and more information about the concert is available on the C4 Foundation’s web page.

During this 4th of July season, as your glass is raised in cheers or your hand graces your heart for the national anthem, remember to acknowledge and celebrate the true spirit of the season. Take a pause and honor the centuries of servicemen and women who make every day of freedom possible. Especially our Gold Star families, like the Keatings, who bear the weight of our freedom more than most.

For more information about the C4 Foundation, including purchasing tickets to the July 3rd C4 Benefit Concert, or to make a donation, visit www.c4foundation.org.